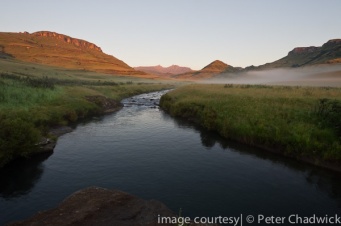 Cobham Nature Reserve is located in the southern Maloti-Drakensberg Transfrontier Park that encompasses afro-montane and grassland habitats. The Maloti-Drakensberg is known for its rugged and spectacular mountain scenery and is a haven for hikers.

In addition to its spectacular scenery the region is also well rewarded as being one of only 23 sites in the world that holds prestigious World Heritage Status for both its biodiversity and for its cultural heritage. It has also been identified as one of seven world Biodiversity Hot Spots and is an international RAMSAR wetland site, supplying water to a large percentage of the South African population.

The weather plays an extremely important role in the shaping of the basalt and sandstone formations that stand out proud in the landscape at Cobham Nature Reserve. In summer, dramatic thunder and lightening operas play along the escarpment, while during the winter month’s snow and fire can ravage across the landscape.

Best Time to Photograph
Spring and summer are definitely the best for birding as this is when many species are displaying for breeding and the migrants are also present. Late summer is also an excellent time for viewing and photographing the wide variety of flowers that are present. Winter provides different scenery and although being generally dull and drab is particularly worthwhile when heavy snows fall.
Type of Photography
Best Time of Year
Photographic Tips
Given that there are no access roads into the Drakensberg apart from the road up Sani Pass, hiking with a backpack is the only way to reach suitable photographic spots. It is therefore worth planning well in advance exactly what you wish to photograph and then plan accordingly as to how long it will take to reach the location. It is worth rising early before the dawn to maximize the early morning light for photography. Birds are generally shy away from the campsites but rare or seldom seen species do make carrying long lenses worthwhile and where possible.
Recommended Gear
A good backpack is essential in the Drakensberg and zoom lenses minimize the amount of equipment that needs to be carried. Wide angled zooms are essential for landscapes as is a macro lens for flower and insect photography. Monopods are useful and can also be used as a hiking support stick. Given that weather conditions can change rapidly, always carry good water-proof coverings for your camera bag. Be well prepared at all times for changing weather and carry extra food, liquids, sunscreen, a hat and warm clothing.

Season and Weather
Summer months are warm with afternoon thunderstorms while winters are cold and heavy snows can fall. Be aware that weather changes rapidly in the Drakensberg and all four seasons can occur in a single day. Heavy snow has been recorded to fall in the middle of summer.
Habitats
Other Activities

Closest Town
Himeville
Getting There
From the N3 take the R617 to Underberg and Himeville. On entering Himeville, follow the signage to Cobham and Sani Pass.
Address
Cobham Nature Reserve
Tweet