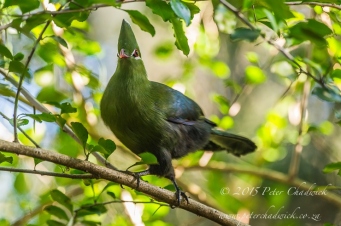 World renowned for its rugged coastline and the Otter Trail, the Storms River section of the Garden Route National Park is also a prime bird-watching spot in the Eastern Cape. Mountain fynbos, coastal forest and a rocky coastline provide a diverse habitat for a large variety of birdlife including Chorister Robin-Chat and Knysna Turaco. For the lucky, Cape Clawless Otter may also be viewed.

In the golden pre-dawn light, Kelp Gulls silhouetted black, glided and dipped above the rolling seas whose waves broke in white cascades and surged with ground shaking power into the narrow rocky gulley’s. Rock Hyraxes emerged, cautiously at first peering out of their boulder hideaways and then confidently clambered up to warm themselves on the sun-drenched pinnacles. Nearby, a pair of African Black Oystercatchers wheeled and turned in a tight dance, all the while calling loudly and telling the world that they were a strongly bonded pair and that this rugged stretch of coastline was their private real estate. Further out to sea, puffs of spray gave away the locations of Humpback Whales that were migrating northwards to the warm tropical waters of the Mozambique Channel where they would mate and calve before heading south again into the frigid waters of the southern oceans. Without a doubt, all that lay before and around me was driven by the sea and to describe the Storms River Mouth section of the Garden Route National Park and the Tsitsikamma was to describe the sea itself! 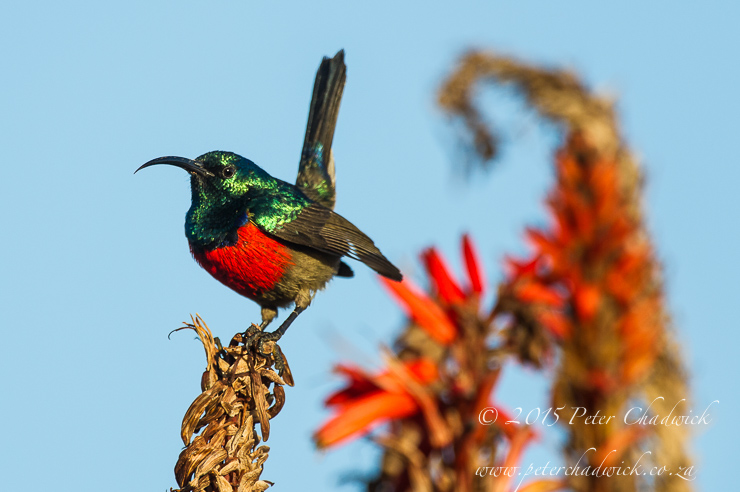 Pulling myself away from the mesmerizing coastline, I turned to look inland at the coastal forest that was drenched in a hazy morning sea mist that took nutrients from the oceans and deposited them onto the greenery. Bushbuck ewes and their large-eyed lambs emerged from the dense forest shadows to nibble gently at fresh leaves while in the skies above, flocks of Red-Winged Starlings turned in unison to land in the canopies of large fruiting trees. In the thickly packed, red flowered Aloe arborescens plants, male Amethyst, Greater-Double Collared and Malachite Sunbirds all in their irradecant costumes, chased one another with a mad intensity, only breaking away occasionally to probe their decurved bills deep into the aloe inflorescences to drink the energy rich nectar. 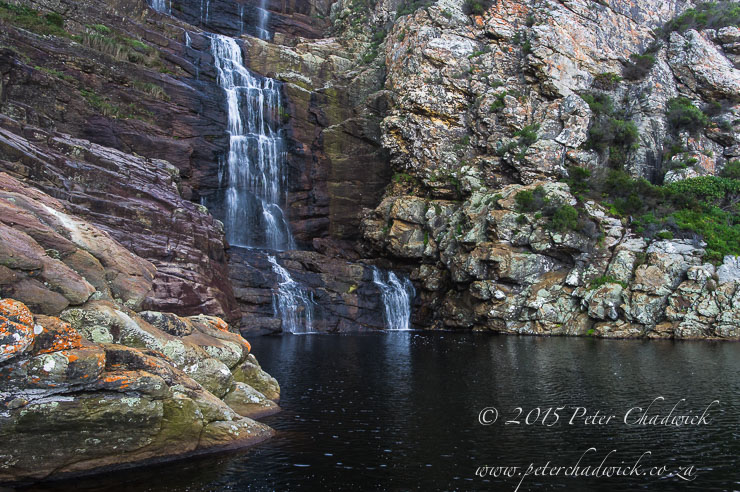 2 of 10: Waterfall on the first section of the Otter Trail.

While it seemed that the rest of the world still slept and not a soul was seen, I wandered slowly along the trail that lead through the forest from the Storm River Mouth restaurant to the massive swing bridge a kilometre or so distant. Emerald green ferns and creepers covered the ground, pushing their leaves and stems upwards towards the light and in amongst the tangled roots of gnarled trees mushrooms and fungi showed a miniature world at work busy breaking down the detritus on the forest floor. Ancient yellowwood trees towered above and in their canopies, crimson flashes of color were exposed as Knysna Turacos opened their wings as they moved around the upper branches, mewling to one another like a chorus of tomcats that were out on a territory grabbing patrol. Being able to walk silently and being on my own had its advantages for bird watching as a little further along, I found a shy birding party with Olive Bush-Shrike, Cape Batis, Dusky Flycatcher, Bar-Throated Apalis, Blue-Mantled Crested-Flycatcher, Black-Backed Puffback and Terrestrial Brownbuls all moving rapidly together through the wooded undergrowth. Breaking into the open again, I climbed down a steep trail to walk over the spans of the swing-bridge that hung over where the Storms River entered into the sea in a mass of Coca-Cola coloured water. A lone White-Breasted Cormorant swam below me, making repeated dives into the murky waters and in the skies above, White-Rumped, Black and Alpine Swifts flew at great speed scooping up aerial plankton with wide open mouths. A Jackal Buzzard launched itself from a cliff-face and was immediately set upon by a pair of White-Necked Ravens that dive-bombed and chased the buzzard until it flew out of site. 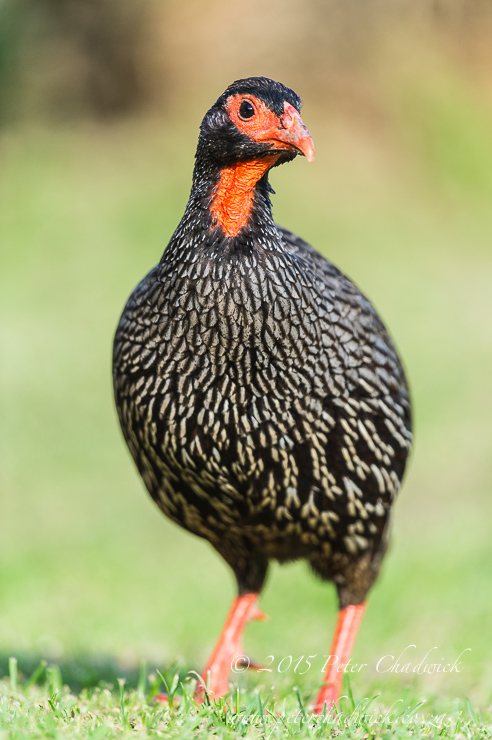 Back at the comfortable wooden chalet that held magnificent views of the ocean and of the waves ponding against the shoreline, my two daughters and wife were now up and awake and as we sat out on the deck enjoying breakfast, pods of Bottlenose and Indo-Pacific Humpback Dolphins entertained us as they surfed and leaped amongst the curling waves. Cape Cormorants flew eastwards in large v-shaped flocks that carefully avoided the feeding Swift and Sandwich Terns that dive-bombed into the blue waters after small fish. Our meal attracted the attention of Cape Weavers, Southern Boubou’s, Cape Robin-Chats and a small family of Red-Necked Spurfowls that all hoped unsuccessfully that they would be included and receive a chance to pick at the scraps of our meal. After breakfast and with eager anticipation my daughters soon has us all walking out along the trail that heads to the large waterfall and is part of day 1 of the renowned Otter Trail. 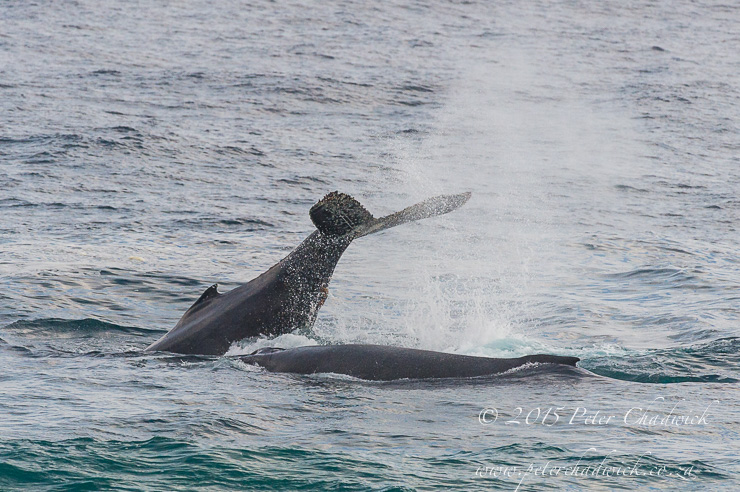 After a gentle introduction along a narrow coastal path, the trail then has us energetically boulder hopping and clambering around large rocks and across small wooden bridges that spanned deep ravines. At Guano Cave, we paused for a quick exploration of the massive and deeply incised cave before continuing to the waterfall where a large pool lay at its base before it tumbled over into the sea. With our arrival, we were just in time to watch a pair of Giant Kingfishers making repeated bathing dips into the cold waters and a pair of very tame Kelp Gulls joined us as we settled for a picnic lunch and brief swim. Other families soon joined us and between the laughter and splashing joy of the children in the water, more serious hikers strode purposefully past us on their way to the first nights destination of the Otter Trail. 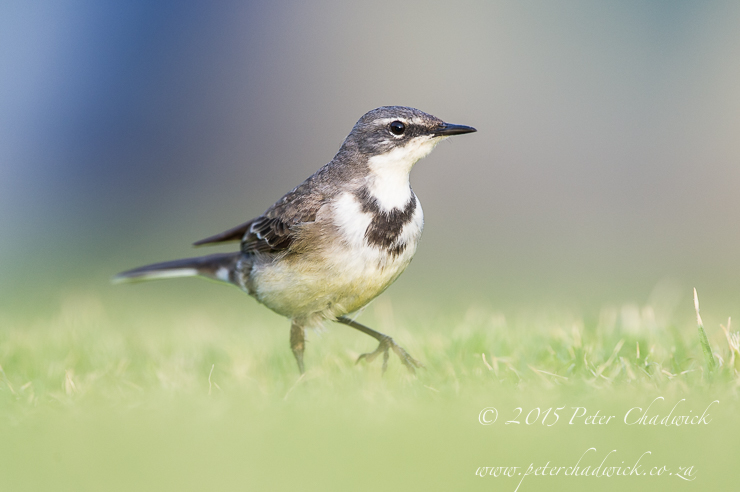 On the return journey, we opted to turn off and follow the Blue Duiker Trail that lead upwards and away from the coast and into the depths of the forest. Birding under the dark canopy was largely initiated through sound with us listening for the movement and calling of the birds. Lemon Doves exploded from the leaf litter at our feet and Olive Thrushes gave their high-pitched alarm calls as we passed. Confusion ensued between us for a short while as the frog calls that we heard emanating from a thicket turned out to be made by a mimicking Chorister Robin-Chat. Sombre Greenbuls, Green-Backed Cameroptera and Yellow-Throated Woodland-Warbler were all located by their calls and the drumming against a dead branch showed the highlight of our trip as a pair of Knysna Woodpeckers searched confidingly for food. As we walked the trail, signs of snuffling Bushpig and the scats of Caracal were found and shy Blue Duikers scampered away into the dense shadows of the undergrowth. 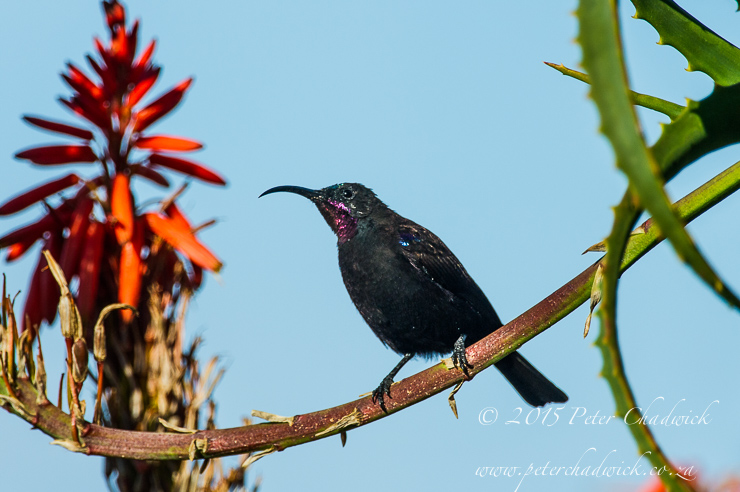 Having expended our energy along the wonderful trails, an afternoon snooze was well in order and as we arose again during late afternoon, puffy pink clouds blazoned the skies. A short stroll down past the campsite and the swimming pool led us to a jumble of ragged rocks and a small rocky bay were we decided to sit and watch the evening light fade away. Just behind the breaking waves the Humpback Whales were fin-thrashing, tail-slapping and breaching in awesome display. A Spotted Thick-knee, Cape Wagtails and Cattle Egrets wandered the green lawns around the swimming pool together with grass-grazing Rock Hyraxes and a movement in the bay drew our attention to a dark shadow that glided through the water. 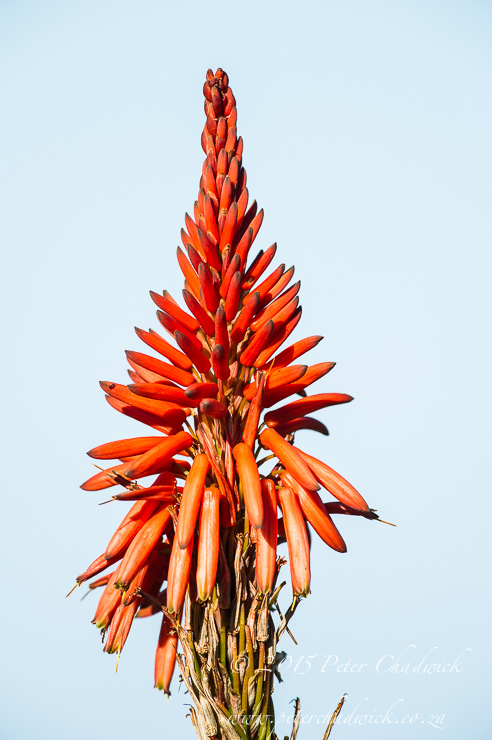 7 of 10: The flowering aloes  that are found throught the camp grounds attact a wide selection of bird species.

Unbelieving at first, we were absolutely thrilled to see the shadow transform into the shape of a feeding Cape Clawless Otter.  We sat motionless, awed by how the otter moved so confidently between the rough white water and smashing waves, diving and bobbing up again without an apparent worry and with an occasional morsel clasped between its paws. A second and then a third otter soon joined the first and well-aware of our presence, the otters totally ignored us, with one of them hauling out only a few meters away from us where it demolished a large crab in chomping mouthfuls. As dusk turned into darkness and the skies burst into millions of twinkling stars, our extremely content family was in agreement that the sea was indeed the master and controller of all that happened at Tsitsikamma! 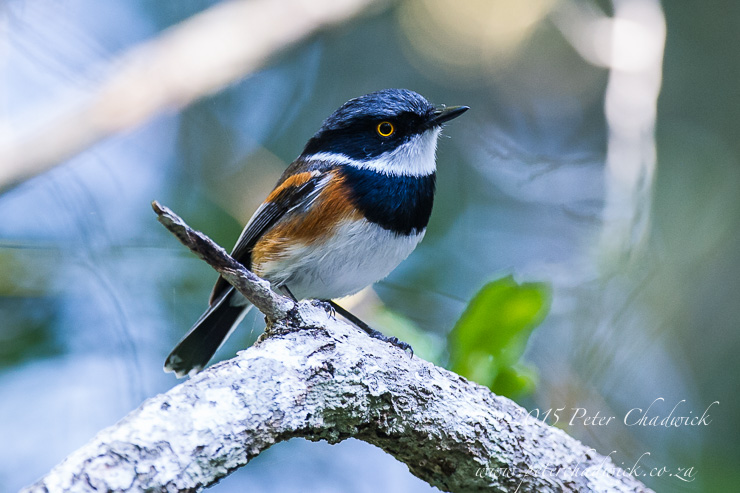 Habitats:
The Garden Route is well known for its last remaining patches of coastal forest that are bisected with tannin-rich rivers. Coastal thicket and fynbos are also present. 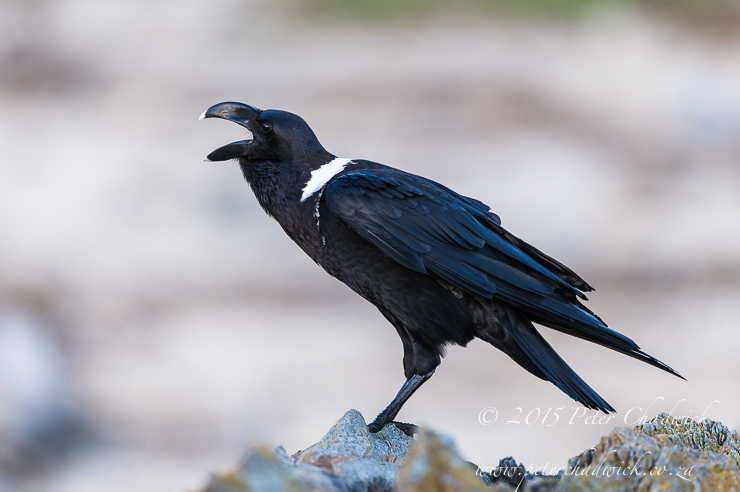 Accommodation & Activities: There are numerous hiking trails within the Storms River area, with the Otter Trail being the most famous of these. Further information regarding these trails can be obtained from the reserve office. Excellent accommodation facilities are available and vary from camping through to self-catering chalets and ocean units. There is a restaurant and shop present. 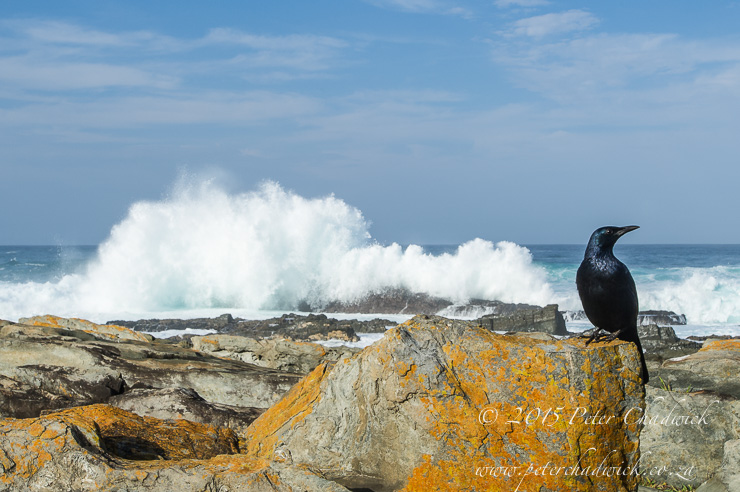