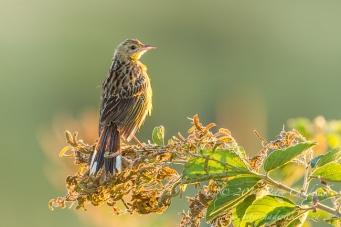 Sea......saw, See..... saw emanated softly from the dark dense undergrowth a few meters away.  I could barely discern the outline of the calling Red-Capped Robin-Chat as the light drops of rain pattered down on the thatch roof of the rondavel from where I was viewing the bird through an open window. Without a breath of wind, the peacefulness of the surroundings reached deep into the core of my body, relieving the tensions of a week spent traveling on airplanes, dodging taxi drivers with death wishes and rushing between meetings and action packed appointments.

When I had fist turned off the N2 highway en-route to the south coast of KwaZulu Natal, I had not been particularly hopeful of enjoying a wilderness experience as I drove through endless sugarcane fields that had totally transformed the once diverse landscape into a sea of uniform green mono-crop.  It was only once I had driven through the gates of the Vernon Crookes Nature Reserve that I had realised I was somewhere extremely special! 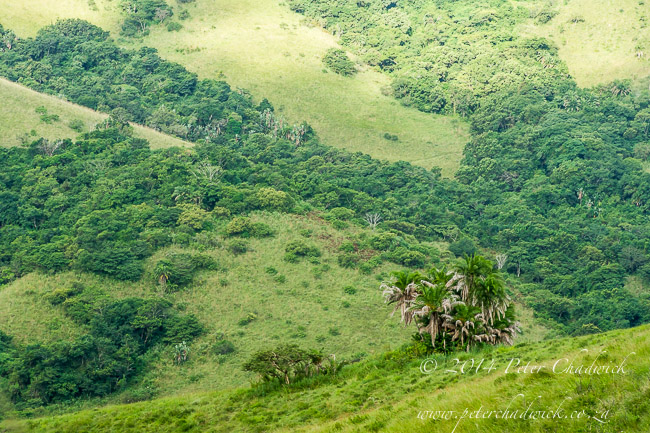 1 of 8: Forests and grasslands of Vernon Crookes Nature Reserve.

A few hours before the rainstorm, I had driven through the entrance gate of the reserve that then led up a steep track bordered by dense vegetation where blue-veined swallowtails and green-veined charaxy butterflies danced in patches of sunlight that filtered down in long golden shafts through the dense tree-tops. Both Knysna and Purple-Crested Turacos called from deep within the vegetation and my patient waiting along the way allowed me brief views of crimson flashes as the birds flared their wings as they moved to a new feeding spot. A vervet monkey troop first peered cautiously at me from behind the boughs of some of the larger trees and after I had been motionless for a few minutes, the youngsters in the troop could hold themselves back no more and bounded with glee down the tree trunks to cavort with one another in the open. My sitting quietly for the monkeys also brought the additional reward of a passing bird party that was led by noisy Square-Tailed Drongo’s. Black-Backed Puffbacks, Amethyst Sunbirds, Bar-Throated Apalis’s, Blue-mantled Crested Flycatchers, a Yellow-Rumped Tinkerbird and a pair of Cardinal Woodpeckers that sought out dead branches against which they tapped for wood boring insects were also in attendance. 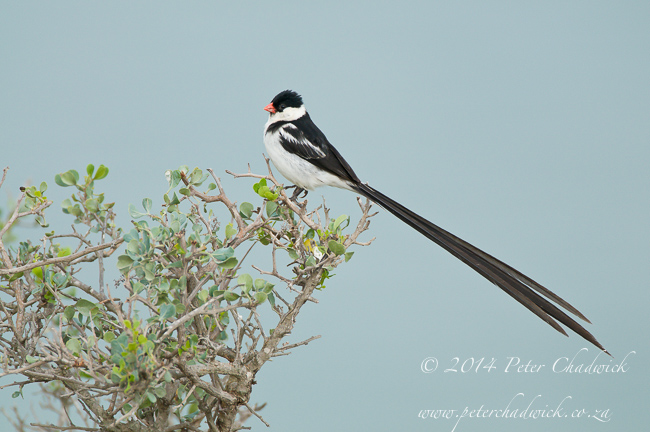 Driving on and upwards, the narrow track popped out onto a vast expanse of wavy, green-gold, seed-laden grasses where Yellow Crowned Bishop, Southern Red Bishop, White-Winged Widowbird and Fan-Tailed Widowbird flocks rose and fell as they moved from one feeding site to another. Zitting Cisticolas did as their name implies and “zitted” constantly just above the grasslands, probably trying to impress some disinterested female cisticolas. Yellow-Throated Longclaw pairs called prominently from the tops of small shrubs and African Stonechat pairs used similar shrubs as lookout points from which to launch after insect prey. In the skies above the grasslands, Banded Martins, Black Saw-Wings and Barn Swallows swooped after aerial plankton, scooping it up with wide-open mouths. Dainty pinkish-white diorama flowers, pink watsonias and a variety of other yellow and pink flowers and shrubs added colour amongst the breeze livened grasslands that in turn attracted countless grasshoppers, butterflies and other insects to their colourful nectar-laden bounties. 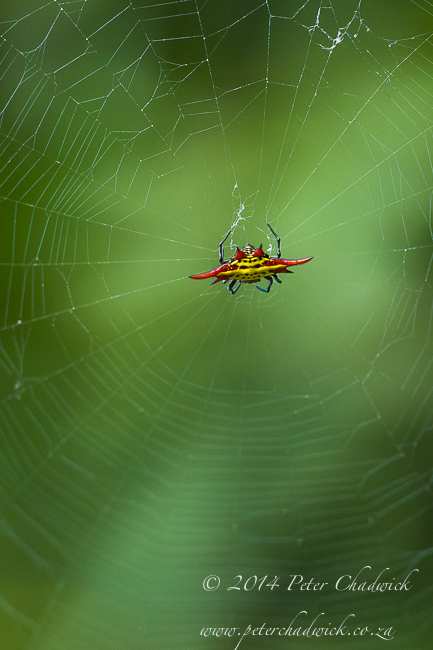 On the final approach to the camp itself, a large dam overflowed into the surrounding grasses where Blue wildebeest, blesbok, impala and Burchells zebra herds lazed around its banks. A pair of Grey Crowned Cranes that were feeding recently hatched chicks allowed a privileged sighting, while on the open water, Yellow-Billed Duck and Spur-winged Geese floated with heads tucked under their wings. Cape Longclaw, African Pipit and African Pied Wagtails walked in the shorter grasses along the dam wall, stopping to peck at insects that had been flushed through their wanderings. In the long sedges and reeds, Thick-Billed Weavers were building their oval oven-shaped nests and Pin-Tailed Whydah males with their distinctive black and white markings and long trailing tails were closely following a small flock of Common Waxbills. 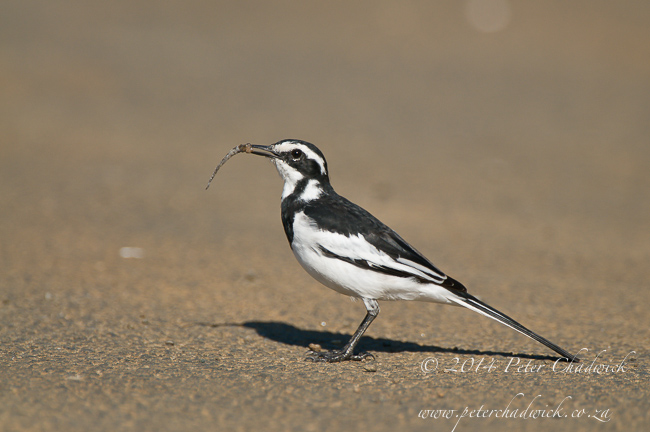 After a quick check-in, I settled into the basic but comfortable rondavels at Nyengelezi hutted camp and then wandered in the camp surrounds to see what birding could be had. Not to disappoint, African Green Pigeons fed high in the tree canopy and the small flock of these parrot-like looking pigeons were soon joined by a pair of noisy Crowned Hornbills that seemed not to be impressed by the meal on offer as they soon flew off again. Black-collared Barbets, Dark-capped Bulbuls, Black-bellied Starlings and Black-headed Orioles were next to arrive in the fruiting tree and the constantly wailing Trumpeter Hornbills could not hide their arrival to join in the feast. In the undergrowth around the camp, tall stands of purple flowers attracted bees, butterflies, hummingbird-like moths and Eastern Olive Sunbirds and Grey Sunbirds that seemed to be more interested in feeding on the plentiful small spiders around the plants than on the flower nectar. 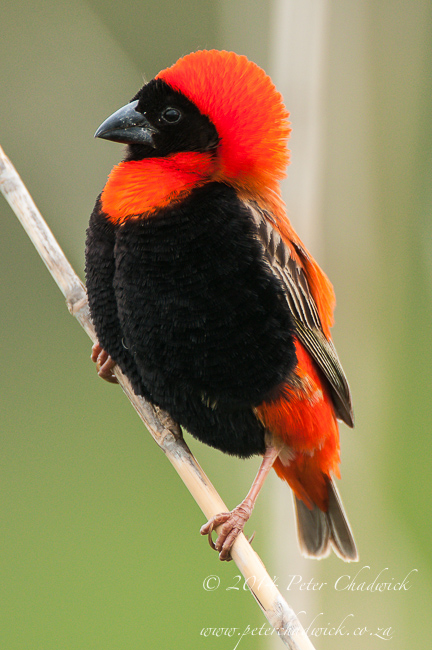 With it now being mid afternoon, heavy cloud and distant thunder quickly darkened the skies and soon large wet raindrops plonked down onto the dry ground and as the rain soon got heavier, I bee-lined it back to the protection of the rondavel to wait out the storm. Typical of most summer thundershowers in this region, the storm did not last long and as it lightened, the Red-Capped Robin Chat, mentioned above, began its distinctive call. With the end of the rain and a short time before darkness, the birds seemed even more energetic and visible and a quick walk along one of the 15kms of walking trails within the reserve had me passing thickets of scarp forest where a Green Malkoha, a Black Cuckooshrike, Magpie Mannikins, Bronze Mannikins, Sombre Greenbuls, Cape Glossy Starlings, a Lemon Dove and very specially, a male White-Starred Robin Chat were all seen. Kite spiders and bark spiders were quick to spin their orb-shaped webs in the gaps of branches in the knowledge that the recent rain would activate an insect swarm that would hopefully end up in the spider’s larders. 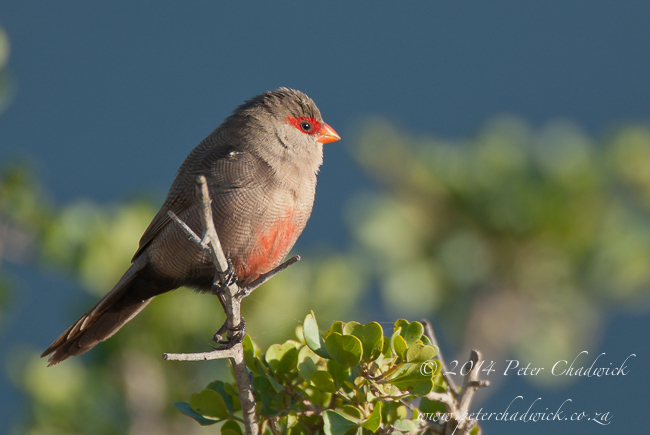 As darkness fell, the rain returned, this time without the threatening rumbling thunder and lightening flashes and the light patter of the raindrops quickly had me off into a deep fitful sleep that was only disturbed with the dawn chorus of the Olive Thrush, Orange Ground-Thrush, Cape White-eyes and a high flying territorial African Goshawk. 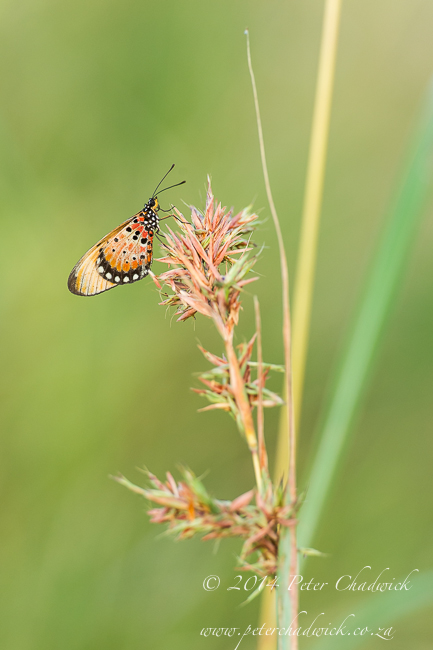 Sadly, with only a little time available to me, I took a last short drive around a section of the reserves rolling hillsides that in the clear crisp morning light also provided distant views of the dark blue seas of the Indian Ocean. The early rays of the warming sun had brought a Burchells Coucal, Spectacled Weavers, Tawny-flanked Prinia pairs and Red-eyed Doves to their own private north-facing perches and from where the birds all sunned themselves, absorbing the energy giving doses of vitamin D provided by the suns rays. On the forest edges, Common Fiscal, Fiscal Flycatcher, Dideric’s Cuckoo, Dusky Flycatchers and Terrestrial Brownbuls were new additions to the previous days sightings while the grasslands added Crowned Lapwing, Southern Masked Weaver and Rattling Cisticolas. 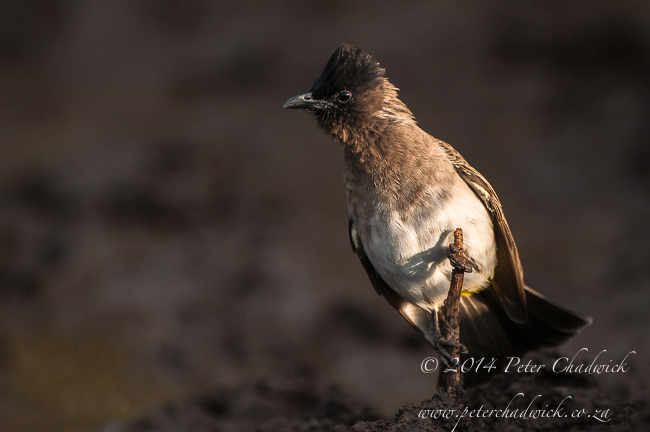 As I exited the gate and passed back into the boring sugarcane fields, I reflected that the brochure advertising Vernon Crookes Nature Reserve as a hidden gem where birds, flowers and insects abound was totally correct but that it had left out the important bit about being the perfect spot to refresh your soul!

Season and weather: Summer months can be extremely hot and humid and afternoon thundershowers can be expected. Winter weather is more pleasant with cool temperatures and more stable weather patterns.

Getting There: Vernon Crookes lies on the R612 and is best reached via the N2 freeway. Take the Park Rynie/Umzinto fly over and follow the Highflats/Ixopo road. The reserve turnoff is approximately 3kms past the town of Umzinto and 12.5kms from the freeway. The reserve is well signposted from this point

Accommodation & Activities: Nyengelezi hutted camp provides 20 beds in small rondavels and a seven bed tree house. There are19 kms of tourist road and a nature trail network of 15kms of varying lengths from one to six hours that traverses the grasslands and forest patches

Reservations: Ezemvelo KZN Wildlife Reservations: Tel: 033 8451000 Email: This email address is being protected from spambots. You need JavaScript enabled to view it. www.kznwildlife.com