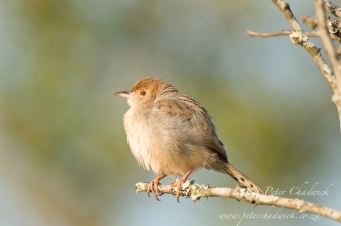 There is something magical about sitting on a high vantage point overlooking dense valley bushveld and listening to the calls of Purple-Crested Turaco’s and Black-Headed Orioles while in the distance herds of zebra and impala are just visible as they graze in the open grasslands. Sitting overlooking Weenan Game Reserve in KwaZulu Natal, I was in such a setting and felt at total peace and as though I belonged more here than in the crazy hustle and bustle of urban life. There was a slight breeze rustling through the long thatch grass and treetops and puffy grey-white storm clouds were building up rapidly that would more than likely herald a late afternoon thunderstorm over this special and ancient landscape.

This piece of bushveld with undulating hills and valleys and mixtures of thickets and open grasslands which provides an excellent and varied setting for approximately 280 different species of birds had attracted my late summer visit and as I drove through the entrance, I had my binoculars and camera at the ready.  I had barely passed through the entrance boom, when a pair of Bokmakierie’s hopped up on to a vantage point and started singing half-heartedly in duet with the accompaniment of a scratchy sounding Common Fiscal. Driving through the reserve countless butterflies including Citrus Swallowtails, Yellow and Black Pansy’s, African Monarch, Painted Ladies, Jokers and Gaudy Commodores all fluttered about the landscape and there were many other species that were new and unknown to me. Termite mounds showed recent signs of repair and expansion and in the numerous piles of rhino dung, mushrooms sprouted in abundance from the nutrient rich heaps. 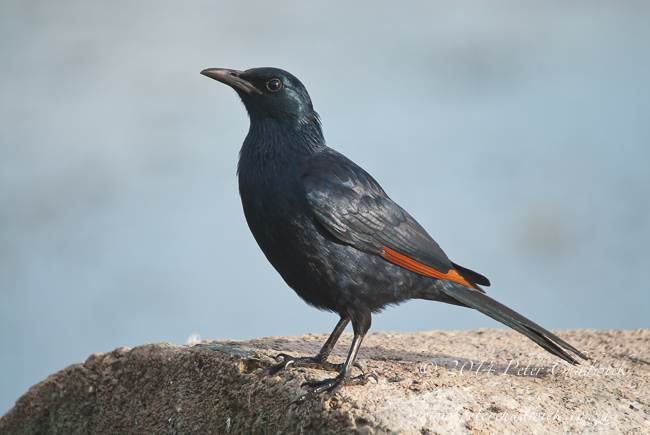 On the banks of a small dam, an Egyptian Goose lay dozing on the banks while nearby a pair of male Common Ostrich were both displaying to an apparently non-interested female who was more intent on feeding alongside a dozing White Rhino bull than in the amorous attention of her two suitors. Cape and Lesser-Masked Weavers and Zitting Cisticolas flew overhead and somewhere in the background the calls of Natal Francolin carried across the landscape. Driving deeper into the reserve, I was soon in the thicker vegetation of acacias, albizias, buffalo-thorns, mountain cabbage, gwarries and euphoria’s which in turn lead me into deep thickly vegetated kloofs. Fork-Tailed Drongo, Emerald-Spotted Wood-Dove, Brubru, Cape Whiteyes and an Orange-Breasted Bush-Shrike were quickly ticked off and high in one of the trees a flock of African Green Pigeons fed on the remaining fruits together with Dark-Capped Bulbuls and two Crowned Hornbills. In the kloof’s there were occasional open rock faces were Rock-Martin flew together with Little and White-Rumped Swifts and on the ledges Red-Winged Starling, Mocking Cliff-Chat, Rock Kestrel and Jackal Buzzard all perched. Sombre Greenbul and Southern Boubou soon became regular sightings in the thickets and they were joined by an occasional Brown-Crowned Tchagra. 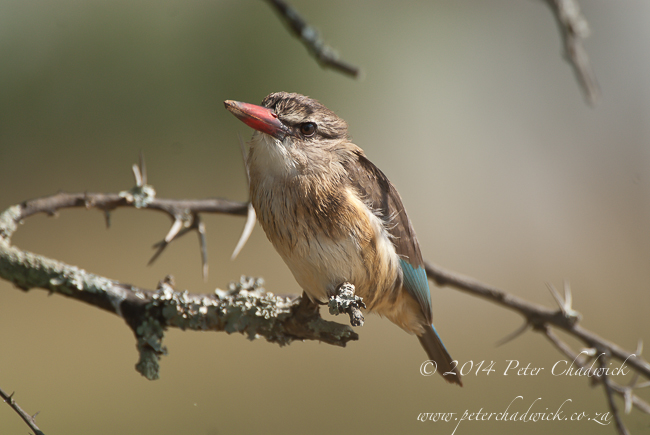 In the skies overhead a Brown Snake Eagle hovered and then stooped into the ground only to emerge again a few seconds later with a still thrashing grass snake in its talons. An African Harrier Hawk also appeared, launching from one tree canopy merely to flop down into the crown of another while looking around hopefully for a tasty morsel. These woodlands provide excellent opportunities for birding parties and I was not to be disappointed when such a party showed itself and moved rapidly through the vegetation. Long-Billed Crombec, Chin-Spot Batis, Black-Crowned Tchagra, Black-Backed Puffback, Pied Barbet, Cardinal Woodpecker, Blue Waxbill, Green-Backed Camaroptera and Golden-Breasted Bunting all appeared briefly before once again disappearing out of sight. 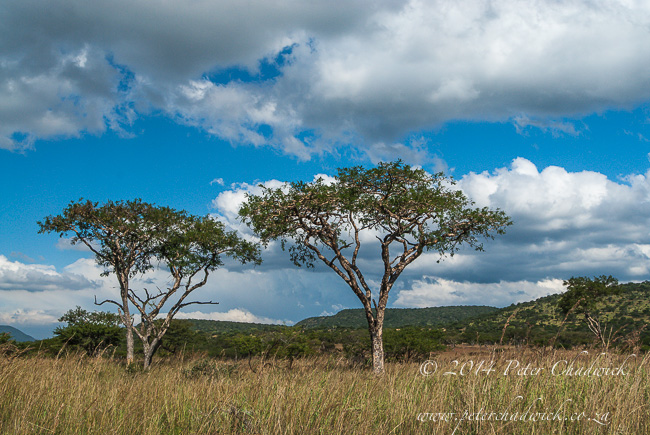 3of 7: Grasslands and open woodlands of Weenan Game Reserve.

Rounding a sharp bend near a hilltop, a massive eland bull gave itself away in the thick vegetation when it shook its heavy neck and head. Huge, three meter spanning webs of Golden-Orb Spiders hung in openings between the trees and the large fat female spiders sat in the centre of their webs in expectation of some insect haplessly entangling itself in the sticky web. With the heat of the day now well and truly in full swing, cicada’s and grasshoppers called incessantly and birding slowed down a bit as everything moved into the shade. 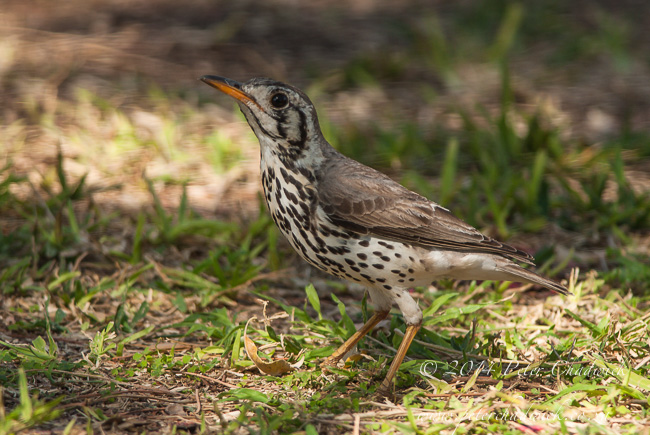 Parking in the shade and under an open glade of trees, I passed away the couple of really hot hours and enjoyed letting the birds come to me. Black-Collared Barbet and Southern Black Tit sat panting in one of the trees and watched as an African Goshawk broke cover and flew rapidly overhead into the next tree canopy. Groundscraper Thrush, Southern Black Flycatcher, African Dusky Flycatcher, a juvenile Red-Chested Cuckoo and flocks of small Yellow-Fronted Canary all appeared at one stage or another and an added bonus was three Kudu cows with a small calf that walked slowly past and stopped to browse occasionally. The Red-Billed Oxpeckers on their backs were more cautious of my presence and uttered harsh alarm calls even if I moved only slightly. As the breeze picked up and cooled things down a bit, I again ventured out onto the high flats on the crowns of the ridges. Here flocks of Pied Crows rode the thermals and at one stage there were well over three hundred of the birds all circling together. Southern Grey-Headed Sparrow and White-Browed Sparrow Weaver fed together below one of the distinctive albizia trees with its peeling bark. A pair of Common Reedbuck lay motionless in the long rank grasses and once again I was only drawn to their presence by the flicking of their ears. Family groups of Giraffe wandered across the plains and merged with herds of Burchells Zebra to become a patchwork of stripes and spots. 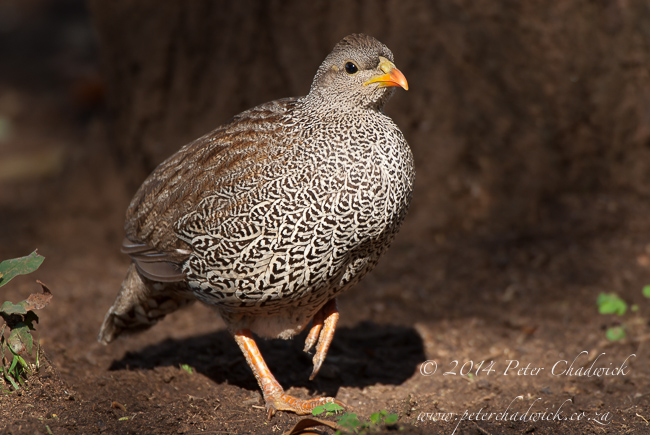 Back in the thicker vegetation, Red Faced Mousebird flocks called constantly to one another and a pair of African Hoopoe wandered on the ground, occasionally probing their long bills deep into the earth. Close by an Olive Thrush flicked leaves over with its beak in search of hidden insects. A male Scarlet-Chested Sunbird with its bright red chest hovered and plucked bits from a tangled spiders web and a small lizard made its last move as a Grey-Headed Bush Shrike launched out of nowhere, grabbed the lizard and pulverized it before swallowing it whole. 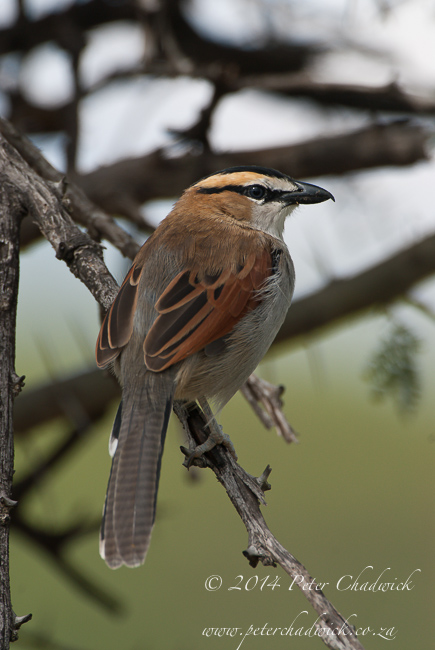 As the shadows lengthened and the darkened rain clouds moved elsewhere taking their promised rain with them, it was time to leave the reserve before gate closing time. On a last turn before the gate my parting shot was the vision of a Spotted Eagle Owl flying down onto the road to snatch at what was at first appearance just a twig. It was only as the Owl flew back to its perch and I started photographing that I realized that the owl had caught a large stick insect. What a way to end a special day in Africa’s bush which is always full of surprises and wonders! 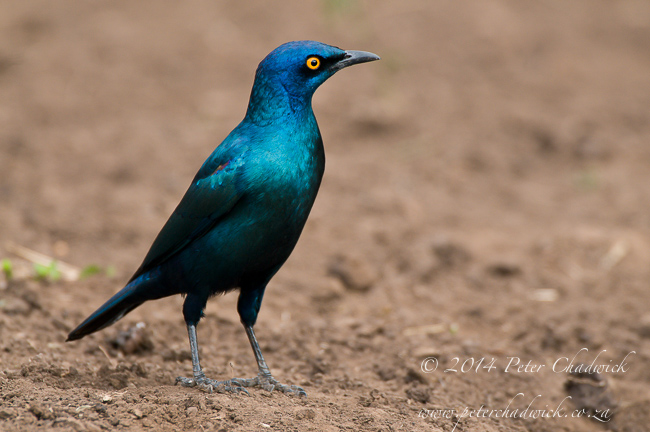 Season and weather: The reserve is situated near the Natal Midlands, which generally has a mild climate with rain falling in the summer months, often accompanied by heavy thunderstorms. Winters can be extremely cold.

Accommodation and Activities: Accommodation varies from camping through to the Nyandu tented camp and a five bed self-catering cottage. There are approximately 30kms of tourist roads with occasional picnic sites and viewing hides. Two short self-guided walking trails are also an option.

Getting There: Weenan Game Reserve is situated 25kms north east of the town of Estcourt. Estcourt can be easily reached via the N3 and lies about an hours drive north of Pietermaritzburg. From Estcourt take the road to Colenso for 3kms and then turn right, following the signs to Weenan Game Reserve.