A Leopard Hunting In The Kgalagadi Grass Hot 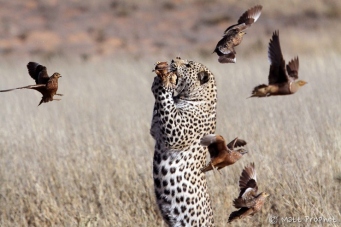 Traveling along the Nossob River in the Kgalagadi Transfrontier Park, Matthew Prophet captured a sequence of rare images of a male leopard catching sandgrouse in mid-flight in the long Kgalagadi grass.

As Matthew said, 'It was one of those magic wildlife photography experiences".

The leopard was completely focused on trying to calculate the direction from which the next flock of noisy sandgrouse would make their touchdown to have their morning drink. Over the course of the next hour, the young male leopard made five consecutive successful jumps, into mixed flocks of Burchell's Pterocles burchelli and Namaqua sandgrouse Pterocles namaqua.  On one occasion he caught a Namaqua dove Oena capensis that had landed on the concrete slab he was hiding behind. The action was fast and astounding. 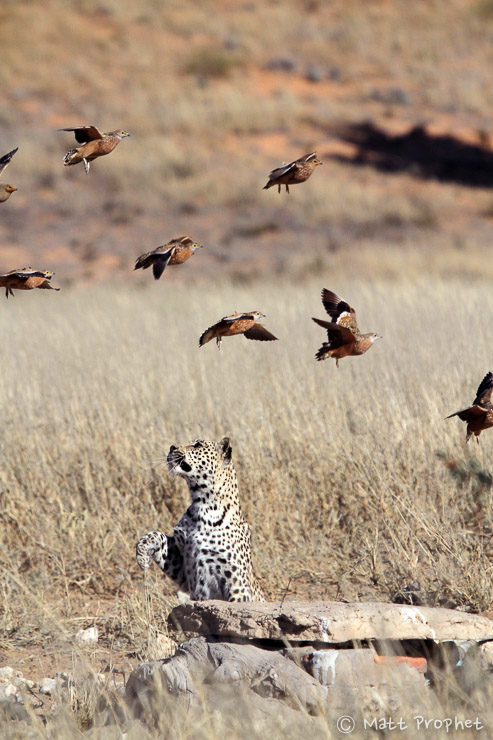 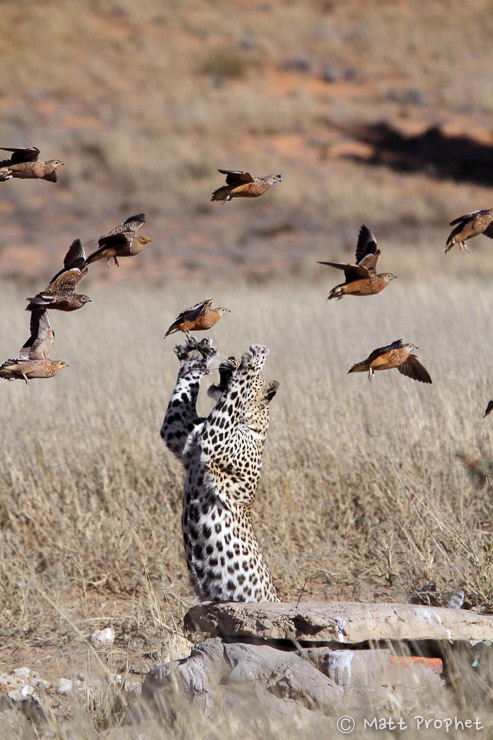 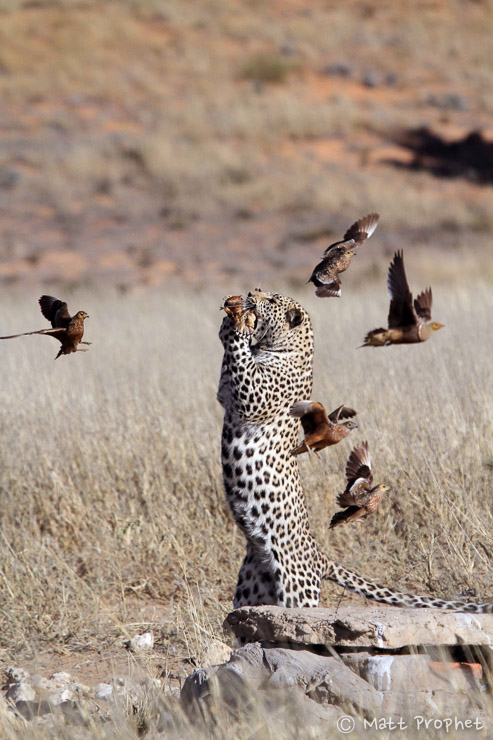 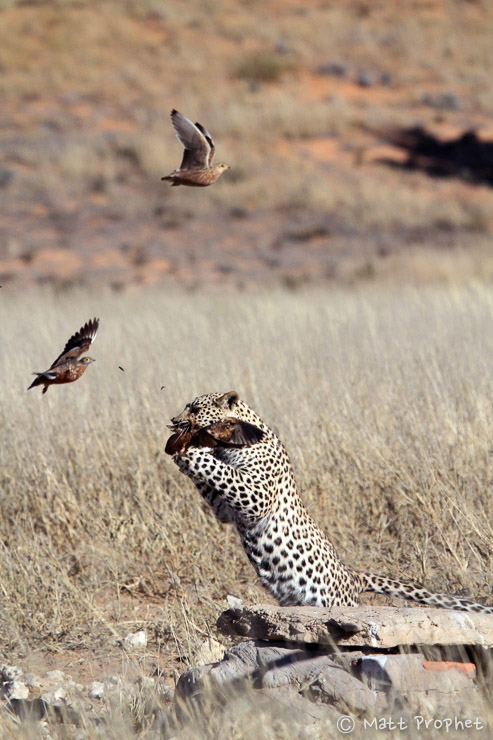 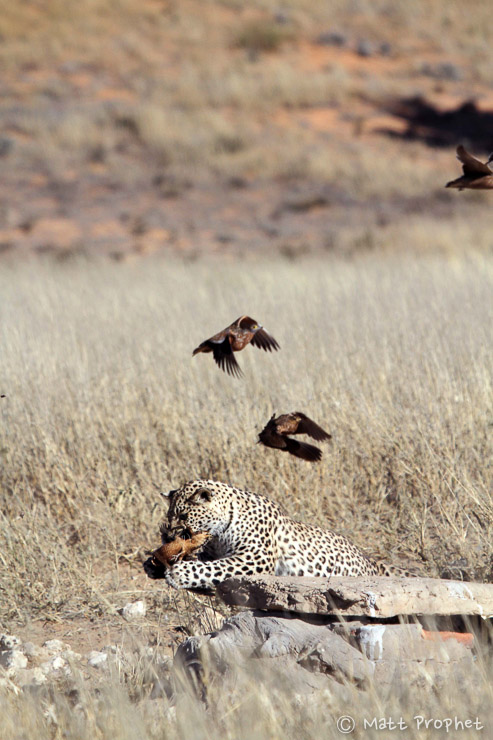 The leopard was trying to catch as many sandgrouse as possible to ensure a worthwhile meal.  Some of the birds that he caught where not immediately killed and on a couple of occasions he had to pursue a wounded sandgrouse as it attempted to escape.

As the morning wore on, and the shadows shortened, the leopard was detected by circling flocks of sandgrouse that would no longer land, forcing him to change his strategy.  During a lull in the activity of incoming flocks of sandgrouse, he returned to conceal himself and try again. He then made several spectacular horizontal leaps to successfully catch birds that had settled to drink. 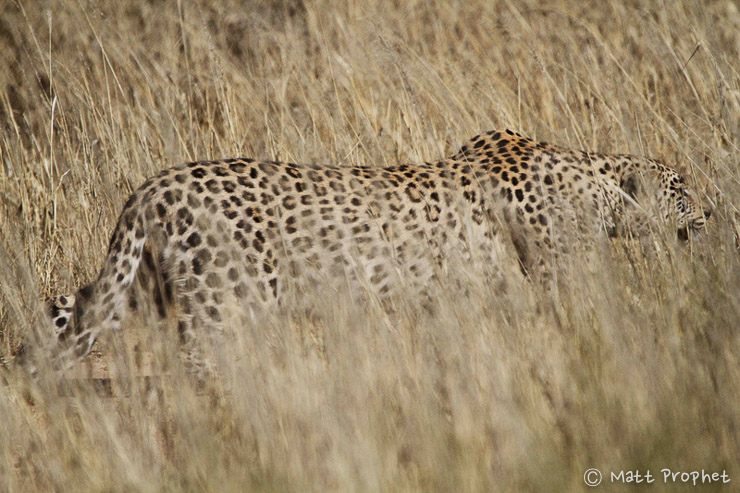 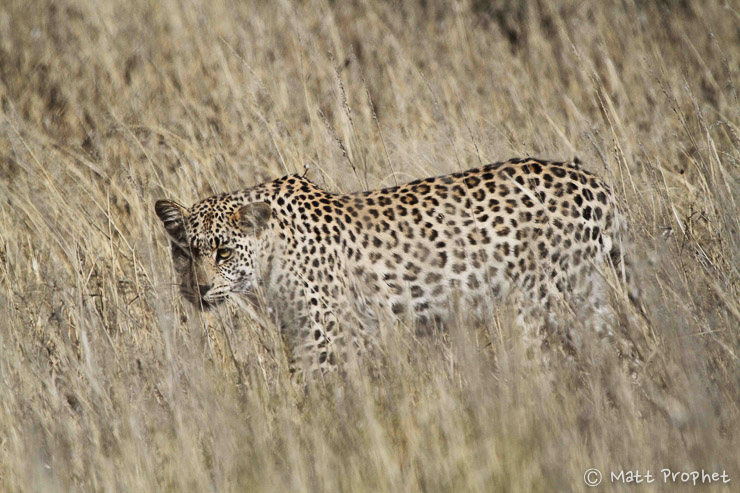 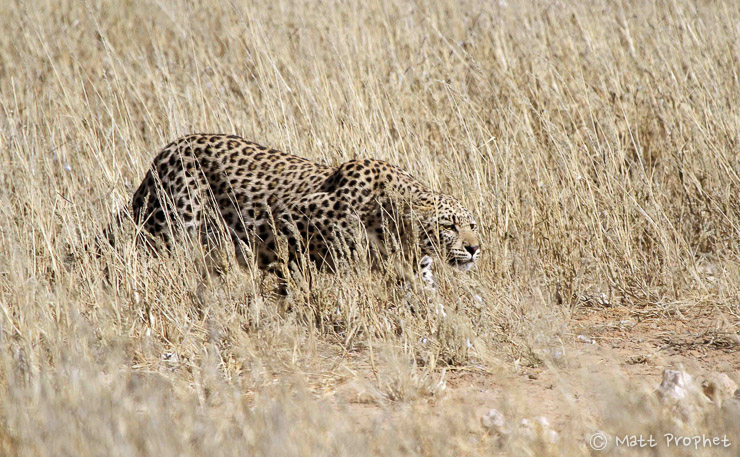 "Always expect the unexpected, wildlife photography is about being prepared and ready for split second action". 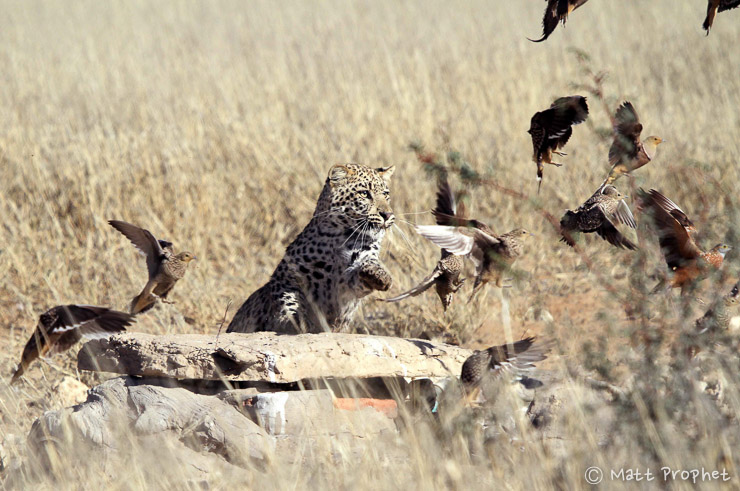 Matthew Prophet is a professional conservationist who has managed a wide range of conservation projects within national parks, nature reserves and marine protected areas in various parts of the World.

Matthew has worked for a number of leading conservation organisations, which have included Cape Nature Conservation in his native South Africa, Peace Parks Foundation in southern Mozambique and more recently The Department of Parks and Wildlife in Western Australia. His passion for wildlife, both terrestrial and marine, has lead him to remote and wild locations in native his South Africa, Zimbabwe, Angola, Namibia, Mozambique, the Seychelles and more recently Australia and Papua New Guinea.

Matthew says, “Photography is an extension of my fascination with nature.  It has enabled me to capture amazing experiences, highlighting the detail and precision that surrounds us in the natural world.  Digital photography is a great way of expanding one’s knowledge and understanding of nature.  It focuses ones attention to what is happening around one and makes people more aware of their environment. I am always impressed by the images that so many photographers are capturing throughout our world each day. It’s a demonstration of just how stunning our world really is".

Matthew, these are without doubt the most unusual imagaes I have ever seen of a leopard! What an incredible sighting and to be able to have captured all this on camera - stunning photos!
Totally agree - wildlife photography really is about the unexpected, split second special moments and sightings that keep the adrenaline pumping....
Commented by Anja Denker March 10, 2014

Matthew, these are without doubt the most unusual imagaes I have ever seen of a leopard! What an incredible sighting and to be able to have captured all this on camera - stunning photos!
Totally agree - wildlife photography really is about the unexpected, split second special moments and sightings that keep the adrenaline pumping....