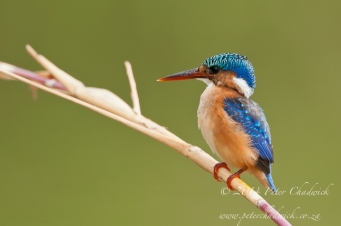 Thin wisps of mist rose off the reeds and sedges as the sun threw its first golden rays over the horizon. In the background White-Throated Robin-Chat, Woodland Kingfishers, Southern Boubou, Swainson’s Spurfowl and Crested Francolins announced the break of a new day, being quickly joined by the bubbling calls from Burchells Coucals and the much harsher calls from a family of Arrow-Marked Babblers.

In the skies, V-shaped skeins of Spur-Winged Geese, African Sacred Ibis and Cattle Egrets criss-crossed one another and Black-Crowned Night-Herons flew to their daytime roosts. Lucas Namanyane, the local bird guide whistled softly to catch my and David Letsoalo’s attention and then pointed into the long grass a few meters away. Several Orange-Breasted Waxbills were swaying precariously on waving grass stems as they nimbly moved up and down stripping off the seeds. We were standing on a dirt road that runs between the pans of one of South Africa’s most famous wetlands and we had left the comfort of our lodge when the night skies were still at their sparkling best. All this effort was to get to the heart of Nylsvlei, which lies just a few hours north from Johannesburg and which holds a rich mix of wetland and bushveld birds. 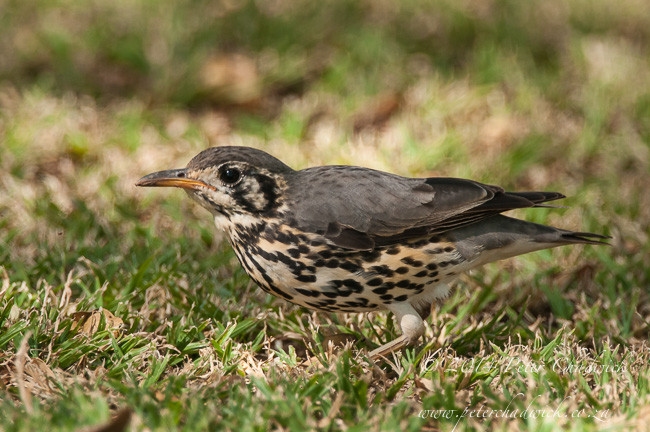 Driving from our lodge in the dark we had excellent views of a Spotted Eagle-Owl hunting large spiders, as well as the usual Fiery-Necked Nightjars and Spotted Thick-Knees that were flushed up from the road as we drove past. On stopping our vehicle, we alighted and let our senses adapt to the pre-dawn light. As the sun popped over the horizon a special sighting of a Marsh Owl hunting low over the wetland had us mesmerised for over twenty minutes and we only drew our gaze away when a pair of Black-Shouldered Kites and three Pied Crows had an aerial battle with one another.

Although the vegetation within the vlei was vividly green, the water levels were low, meaning that the vast numbers of waterbirds for which Nylsvlei is famous were largely absent. None-the-less, there was plenty to keep us occupied with the Red-Backed Shrikes and African Stone Chats hunting insects from high perches through to Rattling and Le-Valliant’s Cisticolas that danced up and down the reed stems. Game was plentiful as well and in the long reeds, Common Reedbuck occasionally popped their heads up above the vegetation and in the distance Roan, Waterbuck, Blue Wildebeest and Tsesebe pushed through the dense stands of greenery. Countless dragonflies in a kaleidoscope of colours hunted over the shallow pools of water and Painted Lady butterflies were common along the roads edge. Heavily due-laden spider-webs were everywhere and in some of the webs large female Golden-Orb and Garden-Orb Spiders hung in the centre of the webs and only on closer inspection could the much smaller males be seen. 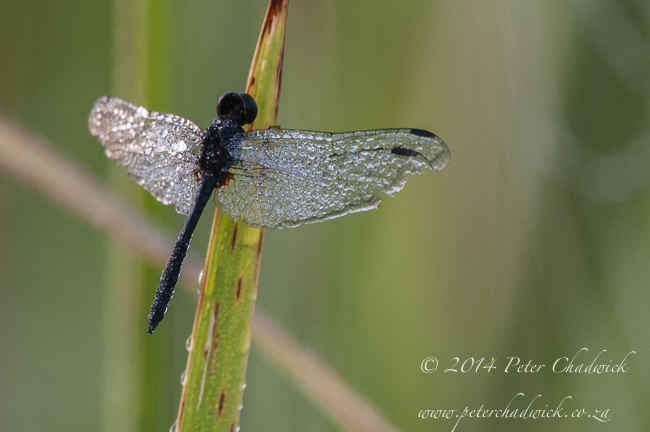 3 of 9: A wide variety of dragonflies and damsleflies may be found at Nylsvlei.

Leaving the wetland briefly, we drove through to a nearby patch of bushveld to catch the breakfast run of birds with Black Cuckooshrike, Yellow-Bellied Greenbul, Golden-Tailed Woodpeckers, Striped Kingfisher and Brown-Hooded Kingfisher rewarding us with their presence. A short stroll through the trees added White-Browed Sparrow-Weaver, Crimson-Breasted Shrike, African Paradise Flycatcher and Crested Barbets. Cape Glossy Starlings flew past with their iridescent plumage catching the clear morning light and Lucas and David debated if there had also been a couple of Greater-Blue-Eared Starlings with them. 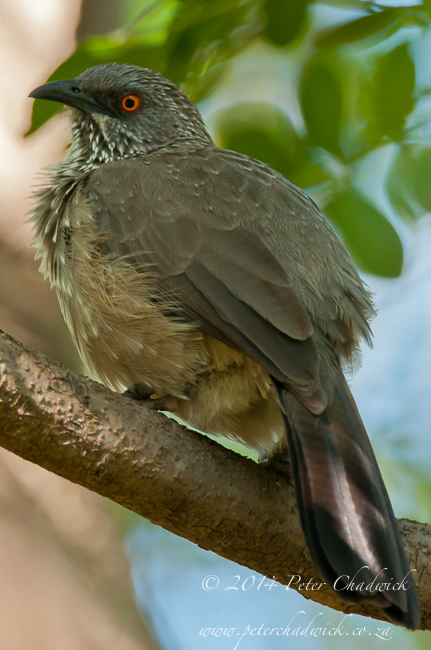 After a quick roadside breakfast, we drove slowly back along the road, passing a causeway where a juvenile Malachite Kingfisher sat patiently on a branch that overhung the water as Common Moorhen and African Jacana’s fed amongst the water weeds below the young kingfisher. All along the fence-lines, Greater-Striped Swallows, Barn Swallows, Yellow-Crowned Bishops and White-Winged Widowbirds sat in rows with fluffed out feathers and enjoying the warmth while below them on the ground Cape Longclaw, African Pipit and Pin-Tailed Whydahs searched for food. 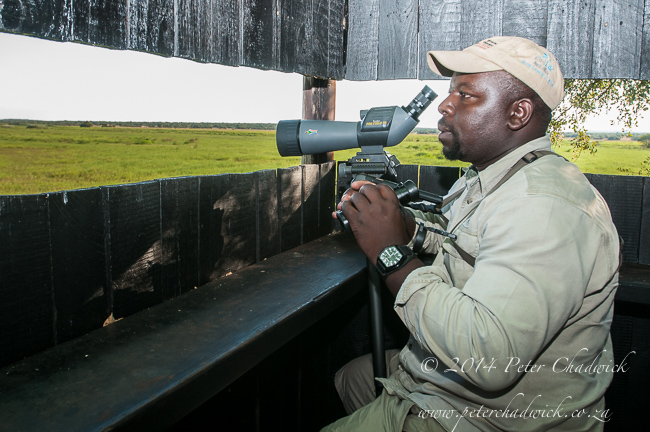 5 of 9: David Letsoalo birdiwatching from one of the Nylsvlei Hides.

On Lucas’s suggestion, we parked the vehicle and shouldered our binoculars and camera gear and wandered slowly across to the hides that were located deep in the middle of the vlei. Walking along paths that lay on top of raised banks, we were able to look down into openings were small bodies of water attracted Reed Cormorant, African Darter, Red-Billed and Hottentot Teal, Black Crake, Marsh Sandpipers and Greenshanks in good numbers. Squacco Herons, Purple Herons and Great Egrets exploded from the reeds with loud and harsh squawks as we walked past where they had been hunting. At this point all three of us started to slap ourselves wildly as we were attacked by large swarms of ravenous mosquitos. Clothing did little to help as the hungry insect’s just bore threw them and into our flesh. Before long we discovered the best way to keep our sanity was to pretend to ignore them and continue with our birding, while also making a mental note to smother ourselves in mosquito repellant the next time we visited. 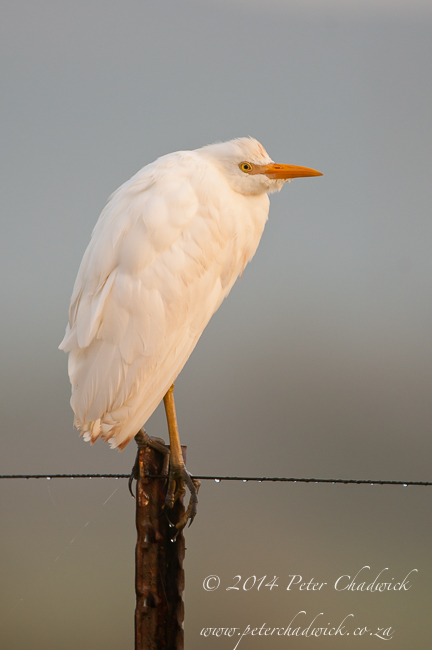 6 of 9: Cattle Egret perched on a fence post at dawn.

As we walked deeper into the wetland, we found shy African Rails and heard Red-Chested Flufftail booming from within the reeds. Glossy Ibis and White-Breasted Cormorants flew constantly overhead together with occasional Grey Heron and Yellow-Billed Egrets. Flocks of Amur Falcons then flew in to feed and soon there were dozens of these attractive small raptors swooping down after insects. Spending time in each of the hides gave views of Cardinal Woodpecker, Tawny-Flanked Prinia and Southern Red Bishops, while on the waterbird front, Comb-Ducks and a pair of African Pygmy Geese gave me much excitement as I had not seen either of these species for many years. 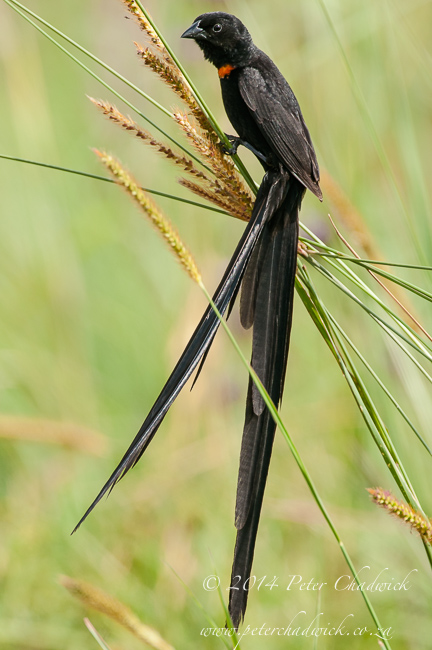 By this time it was well into the morning and with the sun getting ever hotter, bird activity started to wane and we decided to return to our accommodation. We had booked into Dinonyane Lodge, which was a short distance away from the vlei and what really attracted me to this location was the extensive and mostly indigenous garden. Corridors of indigenous trees provided feeding and nesting space for a variety of birds, insects and butterflies of numerous colours and species. I passed the heat of the day relaxing under shaded trees and watching a pair of Groundscraper Thrushes scurry up and down the lawns franticly trying to find enough food for their two constantly begging youngsters. 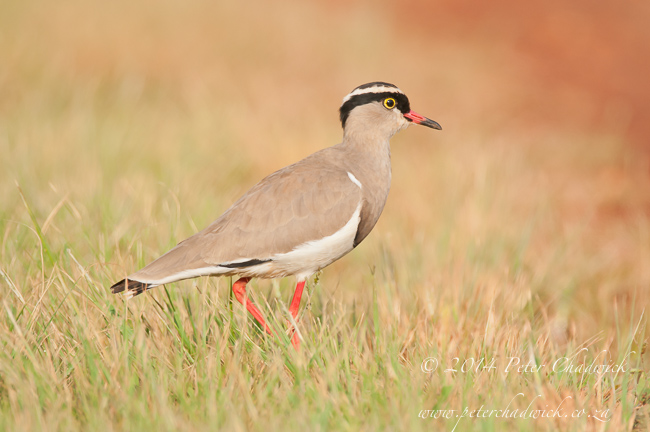 As the shadows lengthened I arose from my lethargy and walked slowly through the gardens following bird’s calls that lead me to Kurrichane Thrush, Dark Capped Bulbul’s Laughing Doves and Grey Go-Away-Birds. Despite hearing African Green-Pigeons and searching hard for them, I could not locate these birds that were sitting high in the dense foliage of a large tree. Bird-feeders that were scattered around the garden attracted Common Waxbill and Southern Grey-Headed Sparrows and more excitingly numerous Cut-Throat Finches. Spotted Flycatchers pairs moved constantly from perch to perch and a Yellow-Fronted Tinkerbird showed itself briefly as it moved between calling stations. The final birds to be added to what was a productive list, given the short time frame, was a pair of Black-Collared Barbets that sang in perfect duet at the top of a dead tree. Although the autumn months are the best time to visit Nylsvlei as this is when the floodplain generally fills and attracts thousands of waterbirds that quickly start to breed, I had definitely had a worthwhile 24 hours of birding and this was certainly enough of an appetizer to want to bring me back again. Next time though, I would be brining plenty of mosquito repellant! 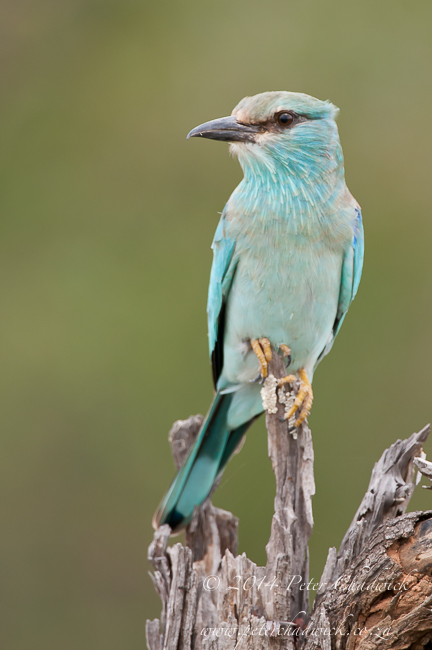 Habitats: Best known for the extensive floodplains and wetlands, Nylsvlei also has good bushveld savanna and patches of highveld grasslands.

Getting There: Access lies off the N1 highway at the Modimolle turnoff at the Kranskop tollgate. Follow the sign posts on the R101. The last section of the road is gravel but is easily passable by small vehicles.

Accommodation & Activities: Nylsvlei is well known for its bird watching but the small reserve is also well stocked with a variety of game species. Hiking trails can also be enjoyed and braai and picnic facilities are also available. Qualified bird-guides may be booked through Dinonyane Lodge.

Reservations: Dinonyane Lodge: Tel: 014 7430957 Email: This email address is being protected from spambots. You need JavaScript enabled to view it. Web: www.dinonyane.co.za