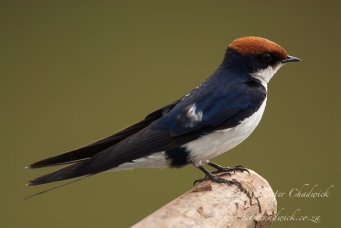 The lowveld of South Africa is renowned for its diversity of birdlife and right at the heart of this is the town of Phalaborwa, which also lies on the doorstep of the Kruger National Park. For me, every trip here always brings excitement with memories of colourful Lilac-Breasted Rollers, Crested Barbets, Southern Yellow-Billed Hornbills and a variety of big and powerful raptors and vultures.

After driving through the bustling town of Phalaborwa on a sultry overcast afternoon with the slight hint of rain offering to quench the dry earth, the distant calls of “Victor Victor” of a Greater Honeyguide echoed above the rustle of the wind through the combretum trees. I headed out over the Selati River Bridge where a Giant Kingfisher sat intently watching down into the water for a flicker of movement. 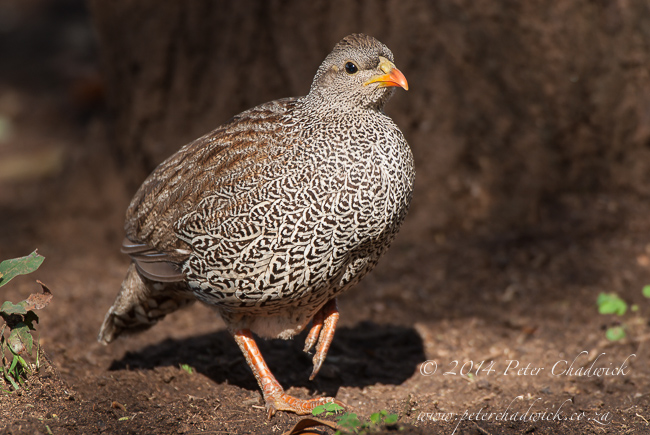 On the banks of the Olifant’s River, I joined Jumbo Safari’s on their afternoon cruise and as we threw the rope from its moorings and cast off through the reedbed, the sound of hippos grunting and snorting echoed across the waters. In a short while I was sitting comfortably on the deck of the boat, watching the life of the river pass by, with my camera eagerly poised to capture the rivers delights. A pair of Wire-Tailed Swallows joined the cruise by perching on the railings of the boat and made the most of the passing insects - swooping off after them and then returning again to perch. On the banks of the river a host of game species from Cape Buffalo and White Rhino to Waterbuck, Giraffe and Impala drank and fed while African Elephants tore at the reeds, pushing them in large clumps into their grinding mouths with African Jacanas walking around their feet as the large mammals squelched through the mud. 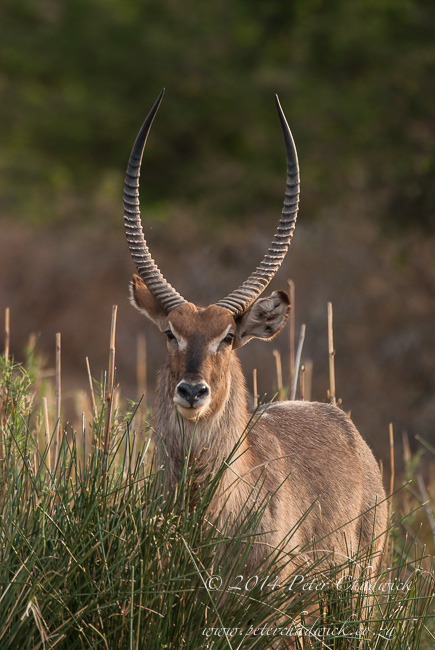 A lone Squacco Heron sat motionless, camouflaged by the reeds and Malachite and Pied Kingfisher sat low over the water on overhanging stems. Large Nile Crocodiles slid silently into the water from their sunning spots and pods of Hippo splashed and bellowed deeply to one another. Egyptian Geese sat alongside flocks of White-Faced Ducks and Reed Cormorants and as the sun began to set the circling flocks of African Black Swifts and African Palm Swifts were replaced by bats that flew down to scoop mouthfuls of water. By the time we docked it was totally dark, with our channel through the reeds was magically lit by flickering fireflies. 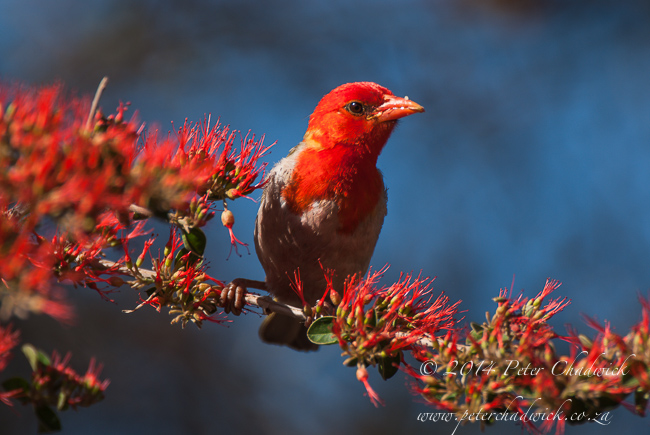 I left the river and drove onto my overnight destination; Bed in the Bush, situated just outside Phalaborwa on the Silonque road and was met by a beaming Aaron and Joseph who after brewing me a much needed pot of coffee showed me my extremely comfortable lodgings. Reflecting on the days activities, I was soon asleep being serenaded by the calls of African Scops-Owls and a distant Verreaux’s Eagle Owl. 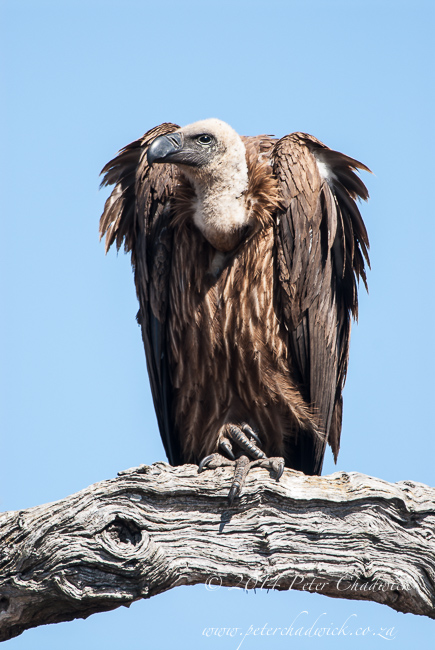 Early, the next morning, the cranky calls of Crested Francolins awakened me from my slumber followed by a soft knock on my door and the aroma of strong coffee. A few minutes later Joseph Masuku, who is a Birdlife South Africa trained birding guide, and I were wandering away from the homestead and into the dry bushveld. All around, signs of life showed themselves, with a Kudu barking harshly and then breaking into a run as it sighted us. Porcupine quills littered the ground at the base of trees, where they had chewed at the bark and the highlight was finding a three-meter long python lying covered in leaves and waiting in ambush next to a game trail. A single note of a call from a Pearl-Spotted Owlet quickly had Joseph responding and mimicking the owlet. This brought an immediate response and a pair of these diminutive owlets showed themselves by flying into the tree above our head and calling in response to the arrogant intruder of their territory. 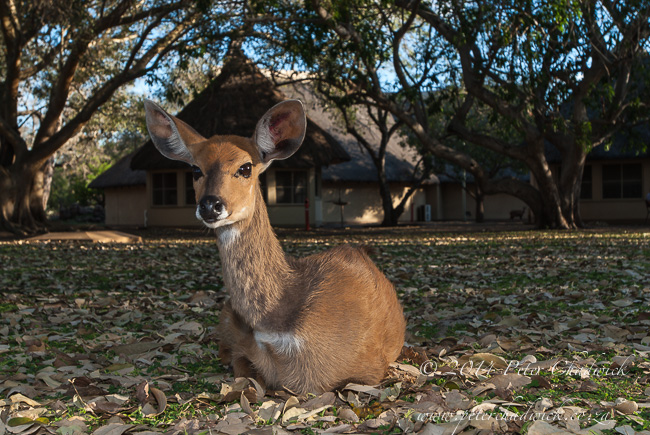 5 of 9: Bushbuck on the lawns of Letaba camp.

After climbing to the top of the kopjies, which showed brilliant views away into the distance of Mozambique, we returned to a scrumptious breakfast on the deck and watched a family of constantly chattering Arrow-Marked Babblers, together with Crested Barbets and Yellow and Southern Red-Billed Hornbills. At the near-by waterhole, a constant flurry of birds flew in and out with Laughing Doves, Blue Waxbills, Jameson’s Firefinch, Golden-Breasted Bunting and Yellow-Fronted Canaries all landing briefly to snatch up a few sips of water before flying off again. A lone Pied Kingfisher perched in a dead tree overhanging the water from where a pair of Little Bee-Eater also launched aerial assaults on flying insects. 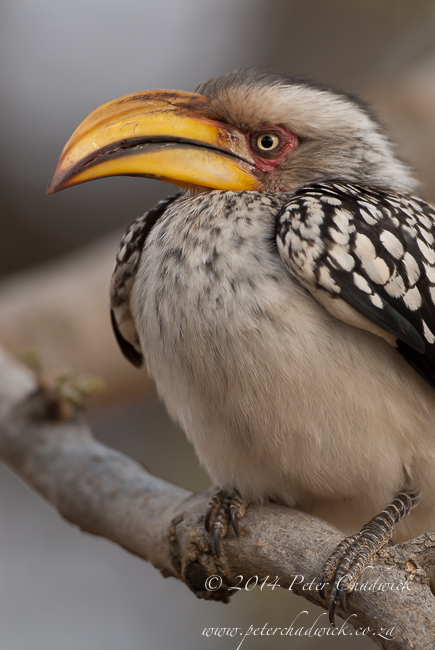 The drive from “Bed in the Bush” to the entrance of the Kruger National Park was a stones throw away and I was soon in the world where raptors dominated the skies. High above and almost an indistinguishable speck, a Martial Eagle soared, while lower down the swaying flight of Bateleur and Yellow-Billed Kites quartered above the roads and riverbeds and Tawny Eagle and White-Backed Vultures silhouetted the tops of trees. Herds of elephants smothered themselves in dust as the heat of the day intensified while buffalos watched with indifference chewing the cud of their morning meals and occasionally wincing as Red-Billed Oxpeckers hit a soft spot. 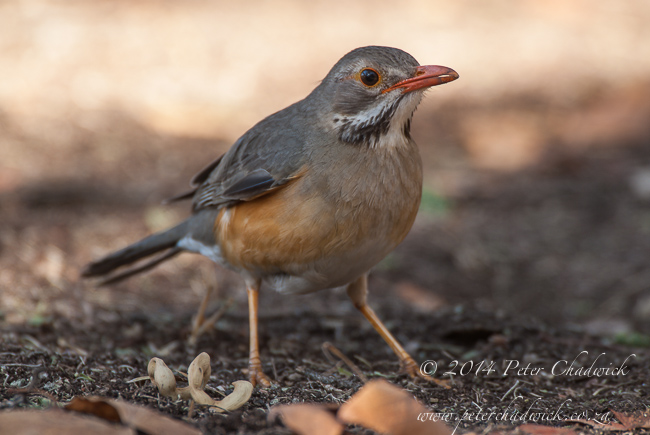 After checking in at the Letaba Rest Camp, I was soon wandering below the ancient trees that filled the camp, listening to Red-Headed Weaver, African Green Pigeon and Brown-Headed Parrot as they called and fed from high in the canopy. Confiding Kurrichane Thrushes, African Mourning Doves and Natal spurfowls wandered at my feet together with countless Bushbuck who had realized that the camp grounds were a safe haven from predators despite the constant attention given by gawking tourists. Below in the riverbed a Fork-Tailed Drongo mobbed a Slender Mongoose as it broke cover to stalk a Water Monitor Lizard which was at least five times its size. Chinspot Batis, Yellow-Breasted Apalis and Ashy Flycatcher all hawked or gleaned insects from the massive Sycamore Fig trees while Vervet Monkeys filled their mouths with the ripening fruits. 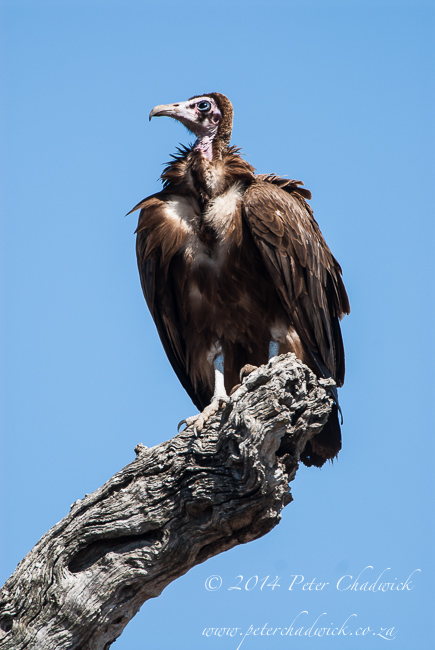 A late afternoon drive out of the camp towards Engelhard dam produced Swainson’s Spurfowl, Striped Kingfisher, Burchells Starling and Sabota Lark that were singing from perches in high trees. A lion kill, with the pride male still feeding on the remains of a bull giraffe, had attracted the ever watchful scavengers and whilst Spotted Hyena and Black-Backed Jackals lurked in the undergrowth, Lappet-Faced, Hooded, White-Headed and White-Backed Vultures all watched with eager anticipation for the lions to leave. 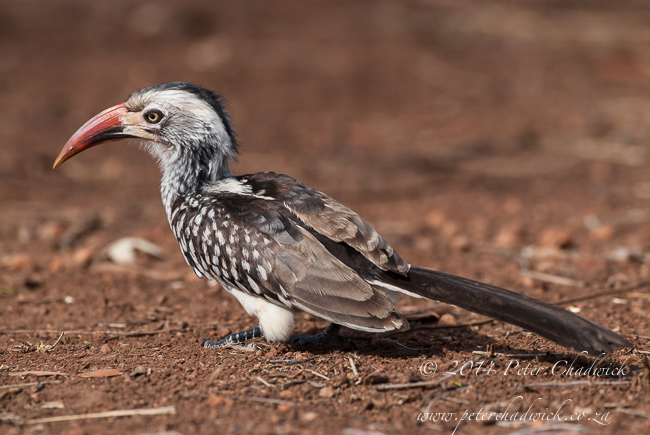 On my drive back to camp a small family of Southern Ground Hornbill walked in dignified fashion along the roadside, stopping to use their massive bills to peck at an insect or reptile that was too slow to scurry to cover. Driving back into the camp as the sun set, the haunting calls of Spotted Thick-Knee brought a close to my exciting days birding.

Season and weather: Summers can be extremely hot, with afternoon thunderstorms. The vegetation is lush and green with many of the migrant birds being present. Winters are generally milder but are very dry.

Habitats: The Kruger to Canyons Birding Route covers a wide variety of habitats from lush heavily vegetated rivers, through to savannah bushveld and open grasslands. Altitudinal differences vary from high cliffs and hills through to deep gorges and lowland areas.