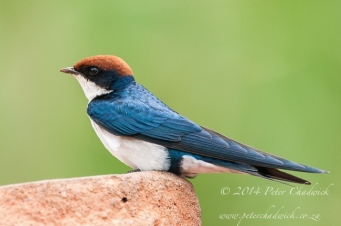 After our previous days successful and energetic birding at Shiluvari Lakeside Lodge and Hangklip, Samson Mulaudzi was still determined to show me a couple of other gems within the Soutmansberg and had also promised me the chance of adding a new bird to my life list! Although we had agreed to meet before the awaking rays of daybreak, there was no need for me to set my alarm clock as a magnificent dawn chorus woke me from my deep sleep. White-Browed Robin-Chats were the lead singers and were accompanied by Gorgeous Bush Shrikes, Dark-Capped Bulbuls and the harsher calls of a flock of Arrow-Marked Babblers.

Having taken a short drive away from Shiluvari, Samson and I were soon at Roodewal scrubland forest and had scarcely alighted from the car when the call of a Narina Trogon had us scuttling through the thickets to locate it. As we found a brightly coloured male trogon, two shadows passed over us and showed the pale underbellies of a pair of Forest Buzzards. Wandering deeper into the forest patch and towards the source of the Luvuvhu River we passed endless orb-spiders that hung in their webs in the hope of catching a passing flying insect. On careful examination of the webs, the smaller male orb-spiders could also be seen sitting dwarfed next to the fat and much larger females and in a few of the webs another species of spider also sat in parasitic anticipation. This small species of spider had realised the advantage of not building its own web but rather benefited from the energetics of the orb spiders by stealing from any captured prey. In one patch of scrub a whole batch of Citrus Swallowtail butterflies were busy emerging simultaneously from their cocoons and sat drying their wings in the morning rays as numerous other butterfly species flittered past. 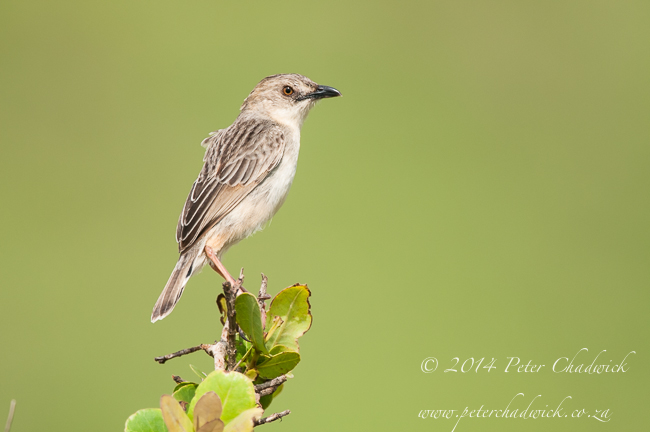 In an acacia thicket a birding party caught our attention and we soon ticked off Green-Backed Camaroptera, Bar-Throated Apalis, Terrestrial Brownbuls and Yellow-Bellied Greenbuls. In the rank grasses Tawny-Flanked Prinia, African Stonechat and Red-Faced Warbler were plentiful. We emerged out of the over-grown thickets into an opening that ran adjacent to a crystal clear stream and above the gurgling noise of flowing water the sound of tapping against dead wood drew our attention to a second birding party where both Golden-Tailed and Olive Woodpeckers were preset together with Black-Backed Puffback, Spectacled Weaver, Purple-Crested Turaco and a real highlight was a small threesome of Green Twinspot. Sitting quietly in this opening for half an hour or so had African Olive-Pigeons, Eastern Nicator, Red-Capped Robin-Chats and White-Bellied Sunbirds passing close by us. 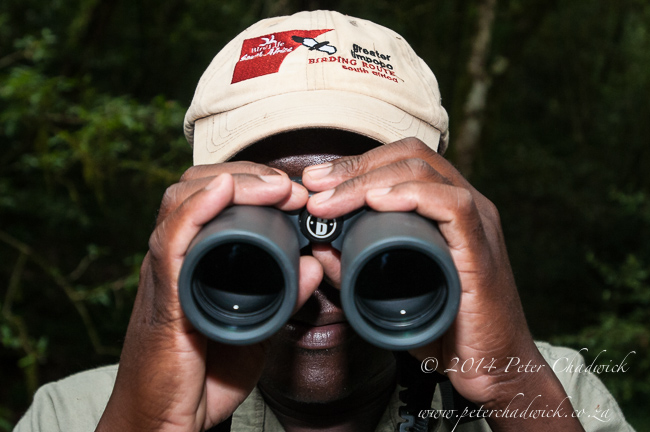 Returning to the deep shadows of the forest and stooping constantly under low branches, we flushed a bushbuck that barked in alarm before crashing off into the undergrowth. This had a chain reaction of setting a troop of baboons into a panic and soon there were barking calls echoing across the forest. We soon completed the forest section of the trail and wandered back towards the vehicle along an open trail that also ran adjacent to a pine plantation. Here, heavily seed-laden grasses hung bent over with feeding Common Waxbills, Pin-Tailed Whydah’s, Blue Waxbills, Jameson’s Firefinches and Purple Indigobird. Crested Francolin and Natal Sourfowls hung to the thicket edges and in the skies above Lesser-Striped Swallows and White-Rumped and Black Swifts swooped after flying insects. 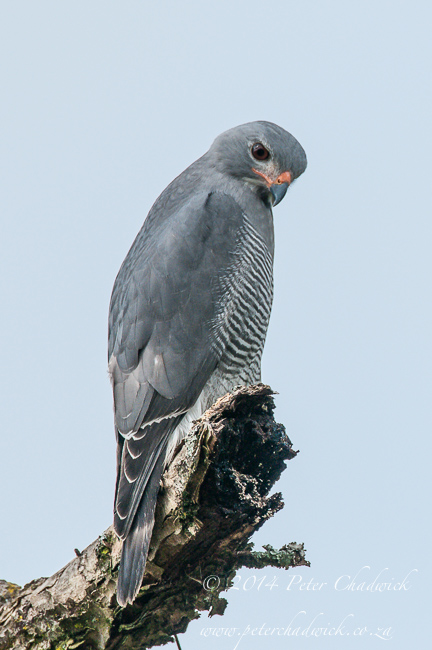 Our next destination was the Muirhead Dams where Samson has special permission to show birding enthusiasts around. This series of dams are set amongst macadamia and banana plantations and around the dam’s edges, fishermen were patiently trying to catch tilapia with their reed rods. Wandering along a trail around one of the dams, Blue-Spotted Wood-Dove and Lemon Dove erupted at our feet and a Lesser-Swamp Warbler called from deep within the reedbeds. A Black Cuckoo-Shrike flew across an opening and towards an African Pygmy Kingfisher that we had not yet seen. In a large fig-tree, Olive Bush-Shrike, Cape White-Eye’s, Brubru, Yellow-Breasted Apalis and four Purple-Crested Turaco’s were either feeding on the ripened fruit or were gleaning insects.

Sitting patiently in the bird hide on the dam’s edge we watched a Little-Banded Goshawk fly in silently with the hope of being able to ambush small birds that came down to the waters edge. Cape Grassbird, Rattling Cisticola and Croaking Cisticola pairs all fed in the reeds and sedges and on the muddy flats, Hadedah’s probed their long bills deep into the wet soil. Little Bee-Eaters hawked insects low over the water and the goshawk launched into action as a flock of Yellow-Fronted Canaries came down to drink. The canaries were way to wary to be caught off guard but the disturbance flushed a Water Thick-knee and a male Fan-Tailed Widowbird.

By this stage the heat of the day was well upon us and Samson and I decided to retire to cooler parts until the late afternoon when we would head to Entabeni montane forest were the elusive Orange Ground-Thrushes were supposed to be a guaranteed sighting. We reached the outskirts of the forest in late afternoon and wound our way ever upwards along dirt trails and beneath towering gum trees where a pair of Bat Hawks sat motionlessly in the upper branches. At a fast flowing stream we took a brief detour to see Mountain Wagtails and searched unsuccessfully for African Finfoot. 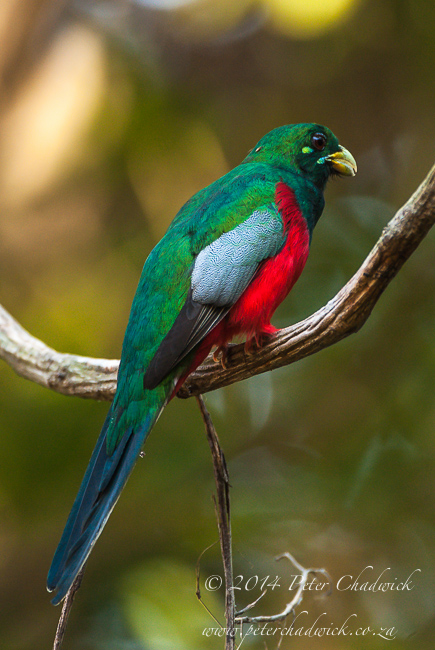 In the forest itself we reverted back to using the calls of the birds to locate them in the limited visibility. Chorister Robin-Chats were the most easily found and next came the Scaly-Throated Honeyguides and Yellow-Streaked Greenbuls. Black Saw-Wings and Little Swifts circled above the crowns of the forest and were soon joined by a swirling flock of Barn Swallows. Samson tried to call the Orange Ground-Thrush to us at three different locations and after his initial promise of a guaranteed sighting his facial expressions became ever more worried as the birds eluded us. We decided to give it one last try right at the crest of the mountain and by now the afternoon was moving well towards dusk.

Samango Monkeys started to alarm call near by and we were privileged enough to catch a brief view of a Crowned Eagle as it headed towards its night time roost. A Grey Cuckoo-Shrike and Dusky Flycatcher were the next two birds added to our list and as we were about to give up on the ground-thrushes, when we heard one call very close by us. This was immediately joined by several other birds and after a quick search we finally managed to track down an adult that was on the ground but which quickly climbed ever higher towards the canopy. We finally managed a clear view of the bird as it sat and called again. I turned to thank Samson for adding this lifer to my list and was greeted with a broad grin that showed immense relief that he was able to indeed live up to his promise! It had turned out that Entabeni was a guaranteed spot to see these elusive birds. 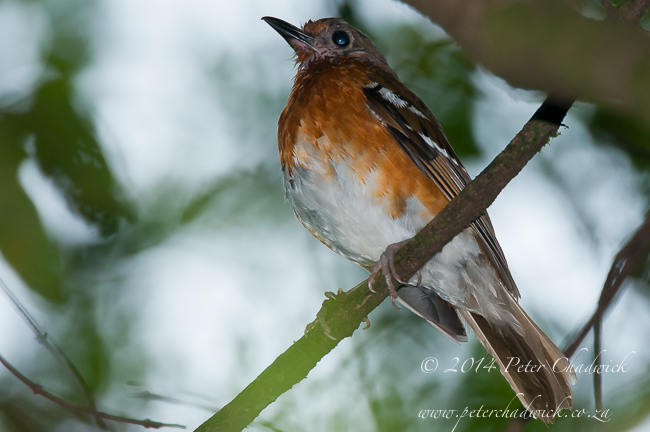 Season and weather: Although it may be extremely hot in low lying areas during the summers with afternoon thunderstorms occurring, the montane forests of the Soutmansberg are often cool and misty, requiring a wind and rainproof jacket. Winters are dry with mild temperatures

Habitats: The Soutmansberg boasts a wide variety of habitats from Savannah Bushveld through to lakes and wetlands with the highlight being the Afro-Montane and scrubveld forests

Getting There: Shiluvari Lakeside Lodge, lies approximately 20km’s east of the town of Makhado off the N1 highway and adjacent to Albisini Dam. It is best reached via the R524. From this starting point and with the aid of Samson, the birding guide, the locations mentioned are easily reached

Accommodation & Activities: Shiluvari Lakeside Forest Lodge offers a range of comfortable chalets as well as having excellent restaurant facilities and swimming pool. A series of short birding trails are also found at the lodge.

Reservations: Shiluvari Lakeside Lodge: Tel: 015 556 3406 Email: This email address is being protected from spambots. You need JavaScript enabled to view it. Web: www.shiluvari.com

Bird Guides: Samson Mulaudzi: Cell: 083 662 9960 Email: This email address is being protected from spambots. You need JavaScript enabled to view it. www.birdingroutes.co.za