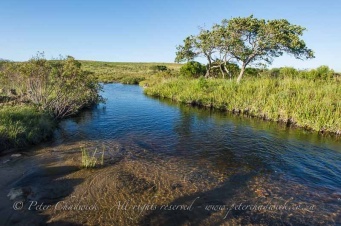 The forested ravines of the Msikaba and Mtentu rivers flank the grasslands, where Eland, Blesbuck, Red Hartebeest and Burchells Zebra are commonly seen against the blue backdrop of the ocean. Birdlife is prolific with 290 species having been recorded with Crowned Eagles and Cape Vultures regularly being sighted along the high gorges and flocks of Crowned Cranes being viewed on the grasslands.

The reserve is relatively undeveloped with the best way to explore it being on foot. There are 10kms of coastline that traverse rugged rocky beaches and large waterfalls that flow directly into the sea. Breathtaking views of the Msikaba gorge may be obtained by walking through the grasslands above the river. At one viewpoint, a large natural amphitheater towers over dense forest.

Best Time to Photograph
Dawn and dusk is best for photography along the coastline, while mid-morning allows sunlight to enter into the deep gorge of the Msikaba. Late afternoon is best for trying to photograph the variety of grazing antelope against the backdrop of the ocean

Type of Photography
Best Time of Year
Throughout the year
Photographic Tips
Photography is best undertaken on foot at Mkambati Nature Reserve and a light backpack with plenty of drinking water, a wind-breaker jacket, sunscreen and hat is useful for easy access to the most photogenic points on the reserve. The coastline within the wilderness area provides numerous photographic opportunities and a hike up the Msikaba River to the amphitheater is a must.

Season and Weather
The area has a relatively high rainfall within the summer season and temperatures are warm and pleasant. The winters are mild.
Habitats
Other Activities

Closest Town
Flagstaff
Getting There
Mkhambati Nature Reserve can be reached via Port St Johns and Flagstaff. Shortly after Flagstaff, the road becomes gravel which can be extremely rough and potholed, particularly after the rains. Always allow for extra traveling time to accommodate for the slow driving speed over the gravel section of the road.