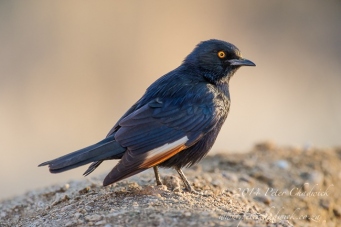 The heat wave hit us hard as we climbed out of our air-conditioned vehicle at the reception of Augrabies National Park at midday. Someone grumbled that it was already 34 degrees and likely to climb up to 38 degrees by mid afternoon. In the distance the roar of the falls could be heard and as we checked in, we watched a constant stream of visitors heading towards the deep gorge along a well laid out boardwalk.

Having lived in the Kalahari Desert for a number of years, the heat was like an old friend and somehow I felt well at home and was not bothered by the warmth. In the trees next to the restaurant deck, White Throated Canaries, Pale Winged Starlings and Red Eyed Bulbuls panted heavily in the heat while Rock Hyraxes seemed oblivious to it and rather spent the time nibbling at newly sprouted green leaves.

1 of 12. Entrance to Augrabies National Park

Given the heat, a mandatory siesta was required until late in the afternoon when it was cool enough to again venture out along the boardwalk to the falls. Hordes of small black flies swarmed around our heads, but were a welcome feast for the endemic Augrabies Flat Lizards that leapt into the air to snatch the flying insects and then chew and swallow them before even landing again. In the air above the river gorge, Bradfield’s Swifts and Alpine Swifts soared effortlessly through the air, while the slower Rock Martins and Brown-Throated Martins flew lower down and closer to the water. 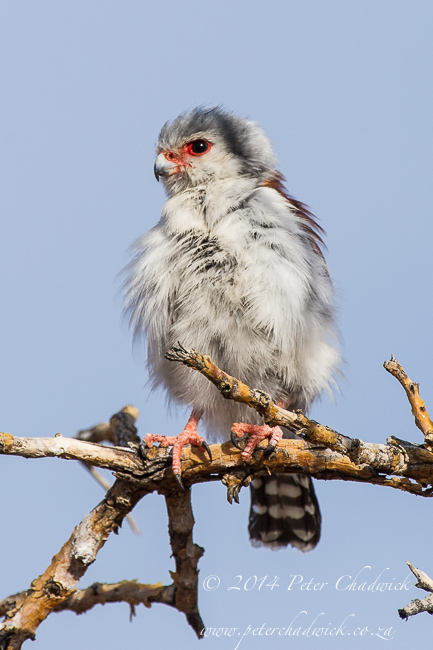 2 of 12: One of the pair of the Pygmy Falcons found in the wilderness area.

The walk was followed with a slow and causal drive through to the wilderness area and at the numerous water causeways, Common Waxbill, Pied Wagtail, Cape Wagtail and Cape and Southern Masked Weavers were regularly seen. A trio of Swallow-Tailed Bee Eaters alternated between preening themselves and swooping out after flying insects that were taken back to a perch and tenderized through a heavy beating before being swallowed. White-Backed Mousebirds and Orange-River White-eyes fed in the trees adjacent to the water and Cape Robin-Chats and Red-Eyed Bulbuls splashed and bathed in the shallow rock pools. A pair of Common Moorhen and their almost fledged youngster fed amongst the dank reeds as Lesser Swamp-Warblers hopped above their heads.

3 of 12. The Orange River cuts through the steep side gorge.

Leaving the water and greenery behind, the landscape changed to arid rolling hills dotted with occasional quiver trees. Karoo Robin-Chats hopped around in the undergrowth and on the open boulders, Cape Buntings and Cinnamon-Breasted Buntings were seen. A stop at the Swartrante Viewing Point was extremely worthwhile to gaze out across the vast geologically diverse landscape and far below a small herd of springbok grazed and browsed. Rock Hyrax families were easily found amongst the koppies by the white urine stained rocks were they sheltered. With time running short for the day, I turned the vehicle at Echo Corner, which overlooked a deep pool in the Orange River where African Darters, South African Shelducks and a lone Grey Heron stood on the river banks. On the return journey, two Double-Banded Coursers and a male and female Namaqua Sandgrouse showed themselves amongst the gravel plains that initially appeared barren of life and I only managed to spot the birds through careful scanning with my binoculars. 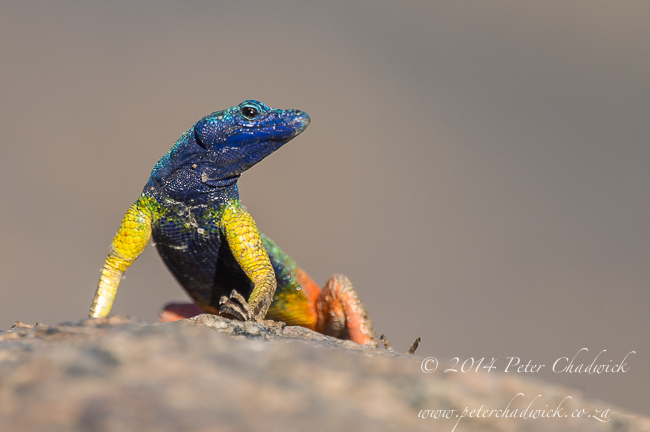 After a fitful nights sleep, early morning coffee on the verandah of the chalet was by far the easiest birding of the time spent at Augrabies National Park as Pale-Winged Starlings, Red-Eyed Bulbuls, Southern Grey-Headed Sparrows, Southern Masked Weavers, Orange River White Eyes and Laughing Doves all flew into the shrubbery next to the chalet to see if there were any scraps to be gleaned. 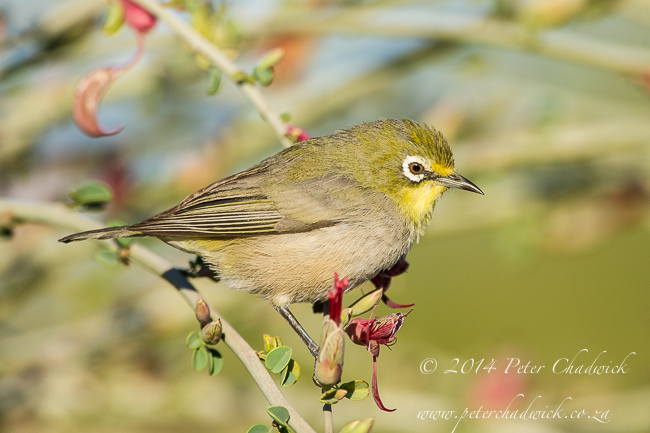 After coffee and before the heat of the day struck, my family and I again drove through into the wilderness area. Spoor of Giraffe and Eland lay fresh in the road but the first mammals to be seen were the Chacma Baboons that sat around grooming one another and stretching and yawning in the early light on a large smooth boulder. Nearby in the stream, a pair of Black Ducks took to flight and joined Hadedahs and White-Breasted Cormorants flying towards the Orange River. In the dead trees small flocks of Greater-Striped Swallows ruffled their feathers in preparation for flight and a Bokmakierie sang loudly, calling in the new day. At yet another stream Cape Turtle-Doves and Namaqua Doves drank as a Three-Banded Plover walked through the moist mud, stirring it with its feet before pecking at food items. A Green-Backed Heron flew up from the reeds as an African Fish Eagle flew overhead. Sitting patiently a little longer at the causeway, we were well rewarded when a Ballion’s Crake that was well out of its normal range and a rare sight indeed wandered across an opening in the reeds.

6 of 12. Namaqua Warbler calling at dusk.

With more time available than the previous evening, we explored the various turn-offs from the main route and drove down to Ararat and Oranjekop. Both had brilliant views up and down the deeply incised gorge of the Orange River and kept me on the lookout for Peregrine Falcons. No falcons were seen, but a pair of Verraux’s Eagles graced me with excellent views as they effortlessly glided past. On the road down to Oranjekop a small birding party of Sociable Weavers, Long-Billed Crombec, Pririt Batis's and Black Fronted Prinia’s were found amongst a patch of Acacia shrubs. For me the highlight of the morning was a pair of Pygmy Falcons that sat calling and displaying to one another with wagging tails. Shortly afterwards, I found a Rock Kestrel running after and snatching up termites on the ground together with a pair of Familiar Chats. Returning back towards the camp, the Eland herd was found moving slowly through the rocky terrain where they would stop periodically to browse and the plentiful calves amongst the large herd took this as an opportunity to suckle from their mothers. Close by we also were fortunate to find seven Giraffes browsing in amongst the large trees that were adjacent to a riverbed. 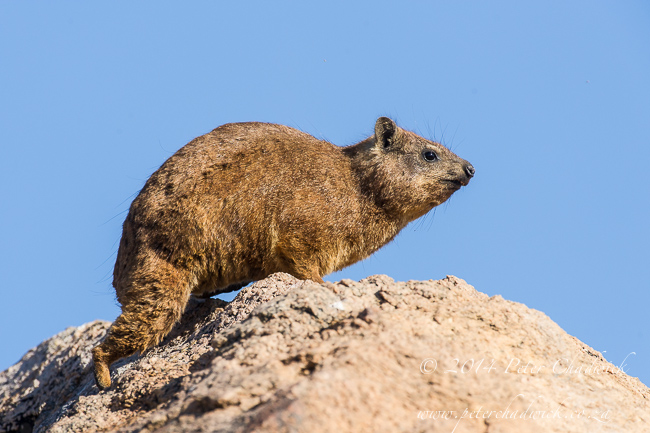 7 of 12. Rock Hyrax sitting as lookout on top of a rocky outcrop.

Having spent most of the time exploring the wilderness area, I decided to spend the afternoon wandering through the campsite and was well rewarded with Red-Faced Mousebird flocks and on the camp lawns, Cape Glossy Starlings and African Hoopoes searched for food amongst a mischievous troop of Vervet Monkeys. Small Grey Mongooses and a Yellow Mongoose wandered between the campsites, stopping below the braai stands to see if any meaty scraps could be found. In the trees Golden Tailed Woodpecker, Namaqua Warbler, Acacia Pied Barbet, Dusky Sunbird and Brubru added to an exciting bird list for this arid part of the country. African Palm Swifts and White-Throated Swallows that circled the palm trees near reception were the final birds seen on this trip and it was with reluctance that we had to check out and continue on our journey through the arid northern and extremely special parts of South Africa. 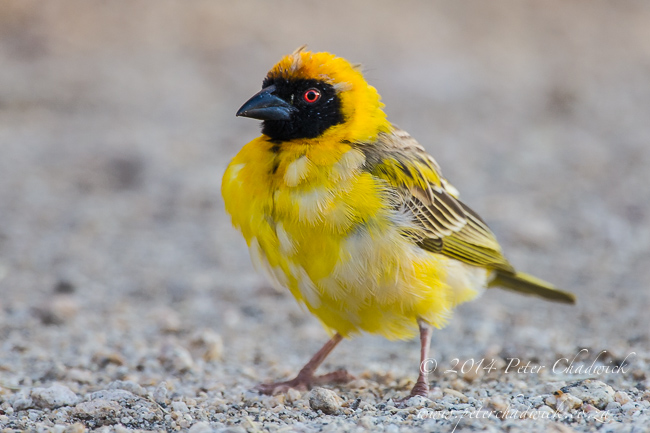 8 of 12. Male Southern Masked Weaver within the Augrabies campsie.

Season and weather: This is a harsh and unpredictable land where water is scarce with less than 50mm falling per year. Temperatures in summer are extremely high while nights can be cold. 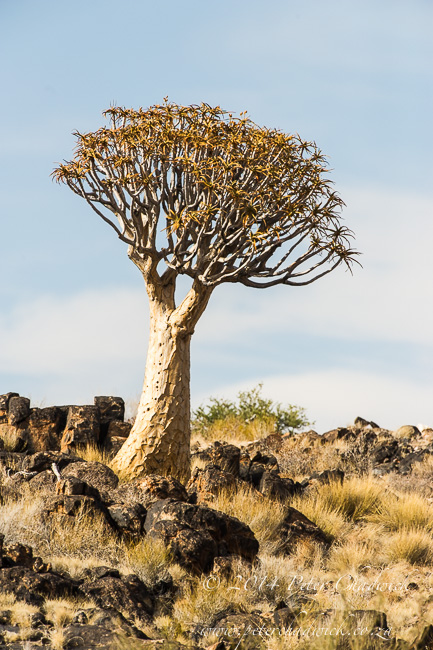 9 of 12. A lone Quiver Tree stands out amongst the barren rocky landscape.

Habitats: The Orange River is the prominent feature of the Augrabies National Park and this has incised deep gorges into the landscape. Riparian vegetation lines the calmer sections and tributaries. Away from the river, arid grasslands and stunted scrub occurs between the boulder kopjies. Over seventy different plant species have been recorded with the Quiver Tree being the most characteristic. 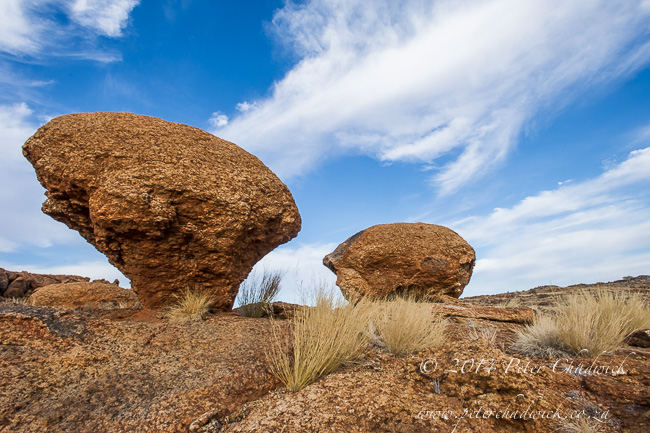 11 of 12. Eroded rock formations found along the banks of the Orange River.

Accommodation: A variety of accommodation can be booked from camping in well-treed campsites through to chalets, which have air-conditioning. Guided game drives may be booked at the reception and there are also a number of hiking trails that are available. 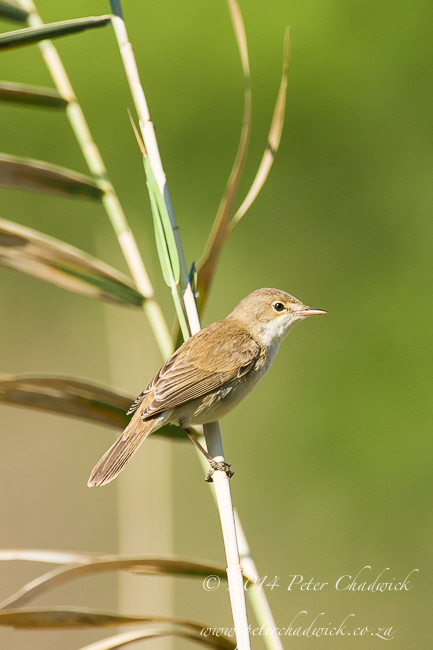