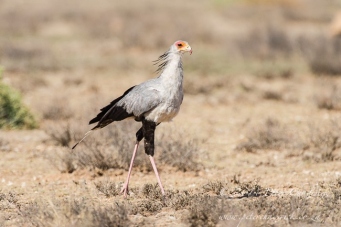 The haunting calls of a flock of six blue cranes echoed from the skies above and as I watched, the magestic birds wheeled and turned, flaring their wings and dropping their long legs in final approach to their landing points. Once on the ground, the birds dipped and bowed before dancing high in the air and finally settling to rest with a ruffle of feathers.

All around me, golden grasses wavered in the slight breeze and puffy white clouds were billowing into towering stacks set against the pale blue skies. Here I was, in the middle of big sky country, on a vast open plain that stretched way into the distance with thousands of termite mounds dotting the ground like pimples on a teenagers face and most having been ripped open by the claws of nocturnal Aardwolf or Aardvark. It felt like I was the only person on earth and yet, it was hard to believe that the historical town of Kimberly lay only a few kilometres away! 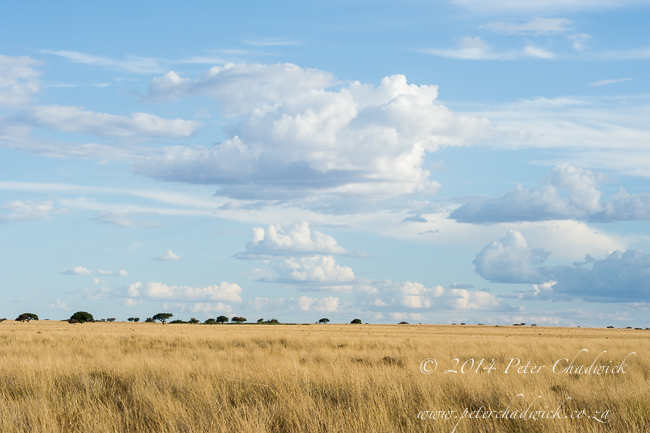 1 of 12. Benfontein grasslands are ideal for many arid species of birds.

Benfontein Nature Reserve is one of a suite of nine properties managed by De Beers under the “Diamond Route” and is located in a transitional zone where dry Karoo, grassland and Kalahari thornveld meet. The reserve is also classified as an Important Bird Area with 12 species of larks and five species of pipits being found amongst the recorded 260 bird species. The reserve is probably most famous for its nocturnal small predators, including elusive black-footed cat, Cape fox, bat-eared fox, aardwolf and aardvark. My trip however, was to focus on some great arid birding and I was definitely not left disappointed. 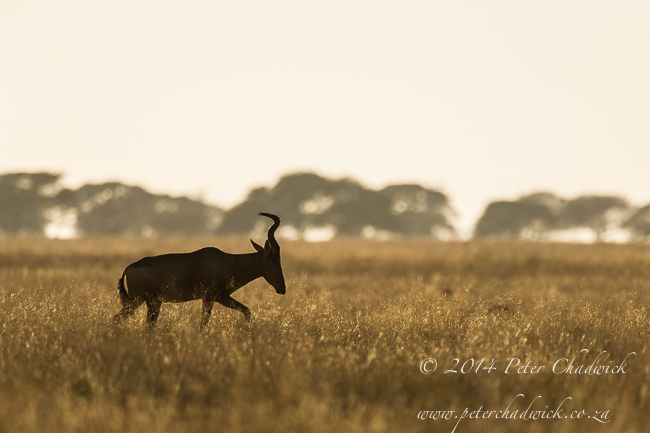 2 of 12. A red hartebeest bull wanders across the open grasslands at dawn.

As the puffy white clouds developed further into threatening darker grey thunder clouds, I drove out in the cooling afternoon and followed the network of rough tracks that led through the reserve. Chocolate brown coloured ant-eating chat families were plentiful and caught small insects that were disturbed by feeding ground squirrels. All around, Northern black korhaan males were calling from the tops of termite mounds and occasionally one of them would launch vertically into the air with heavy flaps before plummeting groundwards again with dangling legs and parachuting wings. 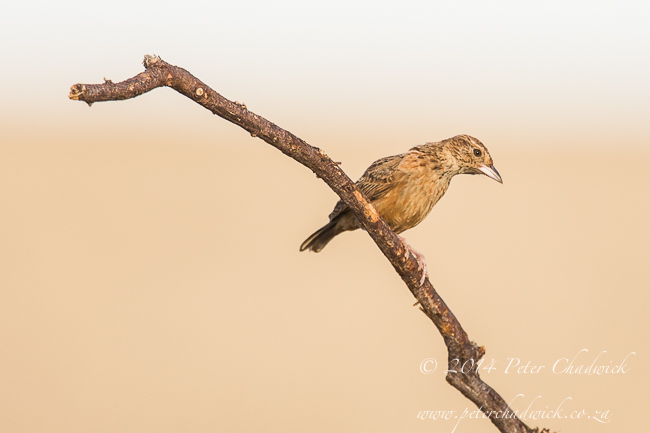 Reaching a large patch of open ground, it was only through the crazy galavanting moves of a bucking black wildebeest bull that I noticed a well camouflaged double-banded courser that was standing motionless next to two even better camouflaged chicks. The crazy wildebeest also put to flight red-capped larks flocks that had been resting in the open ground and panting with half-open wings to try and cool themselves. Further away, a pair of secretarybirds were slamming their feet into something rather large and by the time that I had found a road that passed closer to them, they were already plucking the fur and feeding from an adult Cape Hare. This was the first time that I had seen secretarybirds killing and feeding upon such a large prey item and for the next half hour, I watched as the pair fed amicably side-by-side until they had totally gorged themselves. As dusk approached, I left the open grasslands behind me and drove into an scattered woodland where gnarled camel-thorn trees provided new and exciting habitat. Gemsbok, eland and red hartebeest herds grazed peacefully between the trees and at one point a newly born sprinbok lamb clearly had an identity crisis as it followed and tried to suckle from a very confused hartebeest cow. In the trees, red-eyed bulbuls, African cuckoos, southern yellow-billed hornbills, ashy tits, common scimitarbills, Cape glossy starlings and fiscal flycatchers either rested or searched for food. Black-shouldered kites and shikra were also seen together with the more plentiful pale-chanting goshawks that perched prominently on the tops of the trees. 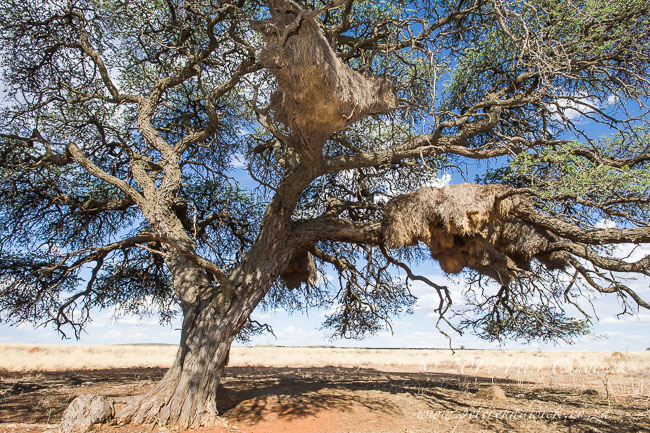 4 of 12. A large sociable weaver nest built around the massive branches of a camel thorn acacia.

In many of the acacia trees, massive untidy grassy nests of sociable weavers hung around the larger boughs of the trees and the constant backwards and forwards flights of adult weaver birds indicated that they were clearly feeding chicks hidden deep within the nest colony. Sitting watching one of the nest sites from a distance, I was rewarded as a small family of several suricates scampered into view and were followed by a pair of fork-tailed drongo’s. The crafty drongo’s would perch nearby the suricates, watching intently and would swoop down, swiftly snatching up any insects disturbed by the hyper-active suricates. As if this was not exciting enough, a pair of Kalahari scrub-robins joined in, hopping in and around the Suricates who barely gave a glance to all these feathered interference’s. 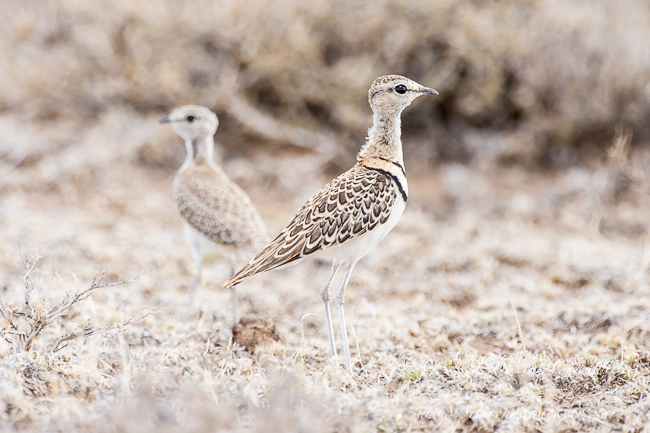 5 of 12. Double-Banded Courser and chick.

Turning back into the open grasslands, the sky was turing into a pinkish-purple, yellowish-orange as the sun dipped towards the horizon and distant rain fell, scenting the air with a fresh dampness. Sprinbok herds began to pronk and dash with glee as barn swallow and European bee-eater flocks swooped overhead. Finally, returning to my small chalet as darkness fell, spotted thick-knees, a barn owl and a spotted-eagle owl were lit up in the beam of my headlights, closing off the days productive viewing. 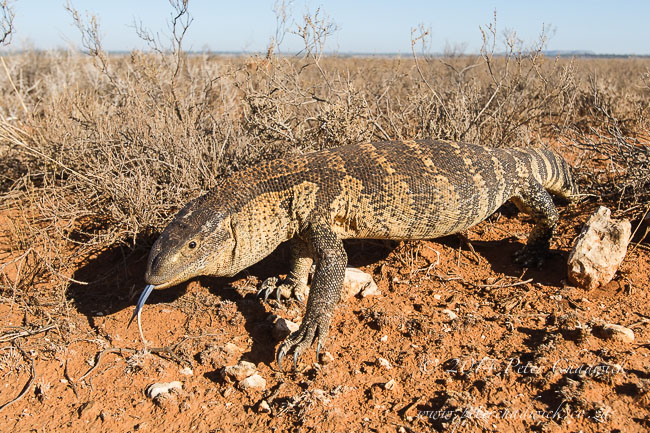 6 of 12. A rock monitor lizard hunts between the stunted shrubs.

I was up well before dawn the next morning and the absolute stillness burnt my ears until the liquid calls of Cape robin-chat, bokmakierie, helemted guineafowl and Cape white-eyes broke the silence, heralding in a new day. Driving out again over the open grasslands, I flushed African quails hiding in the track as well as, spike-heeled larks, Eastern clapper larks and a single rufous-naped lark. This promising start was followed by sightings of pied crow, hadedah, ludwigs bustards and capped wheatears. A pair of red-breasted swallows were systematically searching the open termite mounds in the hopes of finding a suitable location for their nest. As the morning warmed, rock monitor lizards emerged from deep within the termite mounds to wander slowly across the veld until they found a suitable patch in which to bask. Kalahari tent tortoises and leopard tortoises also emerged from their hiding places and enjoyed the warming heat from the sun. 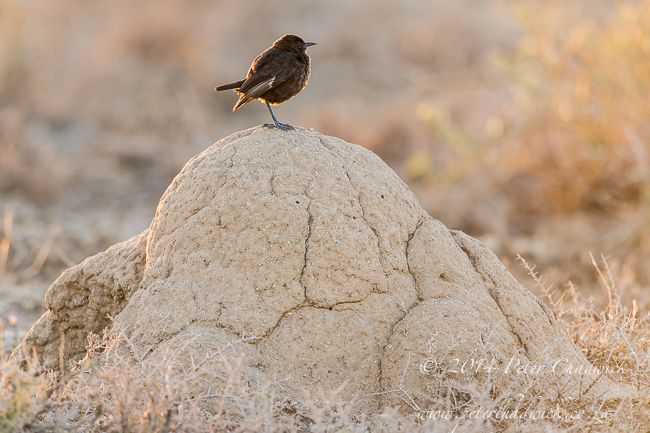 7 of 12. Ant-Eating Chat perched on top of a termite mound at dawn.

At one of the windmills on the reserve, a small waterhole attracted flocks of Cape turtle-doves and Namaqua doves that came down to drink together with flocks of southern red bishops, yellow canaries, lark-like buntings and grey-backed finch-larks. Busy blacksmith lapwings and crowned lapwings dashed around the edges of the waterhole bobbing down to peck at food while also avoiding the aggressive chases of an Egyptian goose pair that had several youngsters with them. This scene was quickly shattered as a lanner falcon stooped in and grabbed one of the totally unsuspecting goslings. The prey was way too heavy for the falcon, who landed in a tumble a few meters away and thus giving the adult geese a chance to launch a counter attack to rescue their youngster. The falcon abandoned its catch, quickly flying away and leaving a very lucky gosling to hide under the protection of its loudly honking parents. What a way for me to end my brief birding sojourn at Benfontein Nature Reserve! 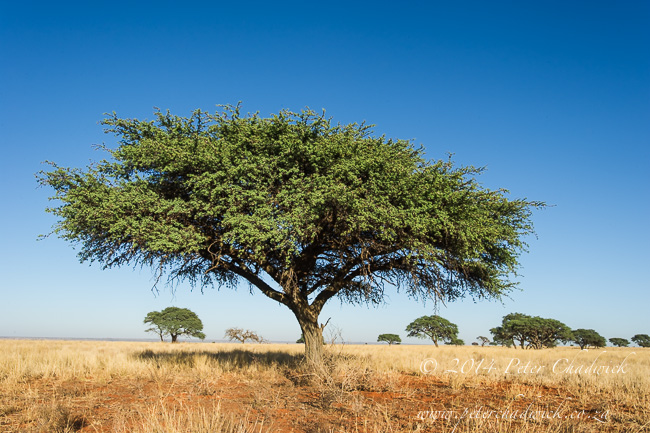 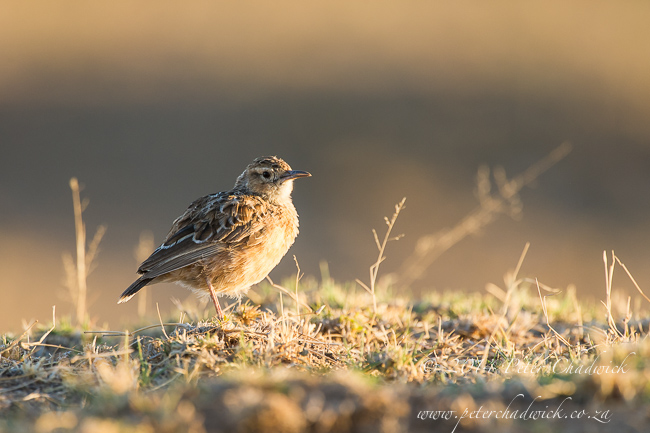 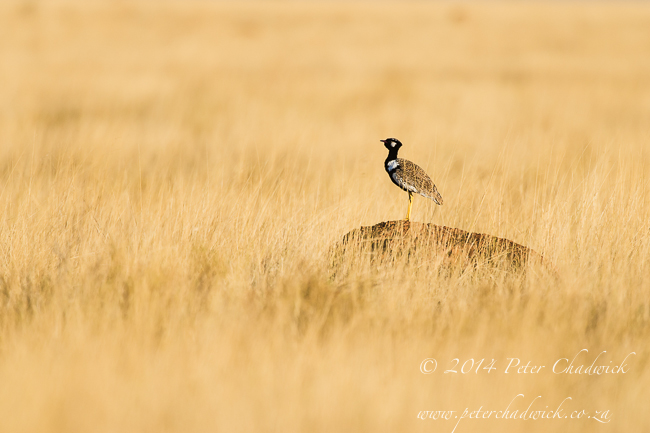 10 of 12. Male Northern Black Korhaan displaying from the top of a termite mound.

Getting There: Benfontein Nature Reserve is situated about 10 kilometres south of Kimberly along the N8 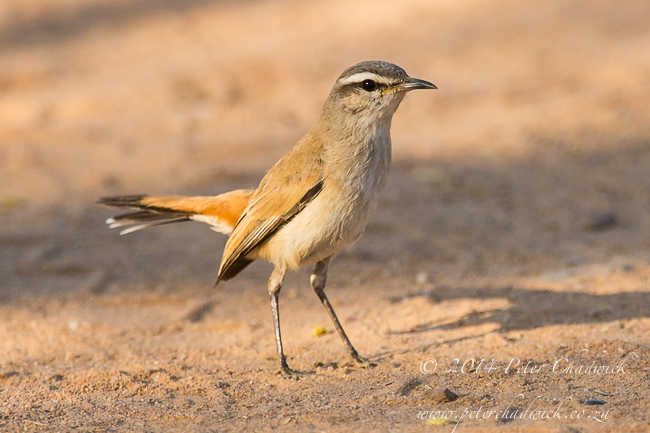 Accommodation & Activities: Rustic camping facilities exist that includes electrical points and communal bathrooms. Group bookings are taken for mountain biking and day visitors are welcomed on prior appointment. Night drives may also be booked in advance. 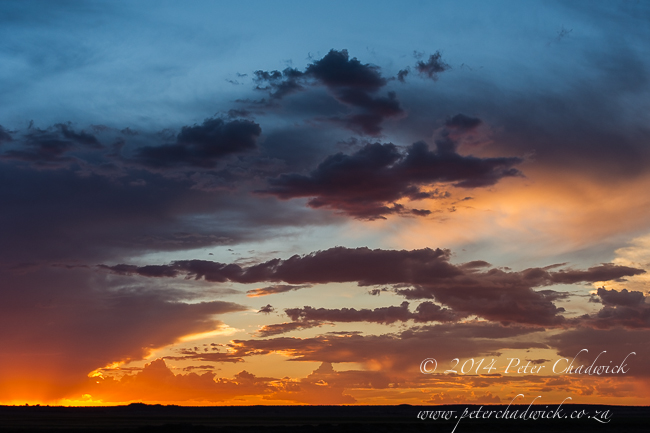