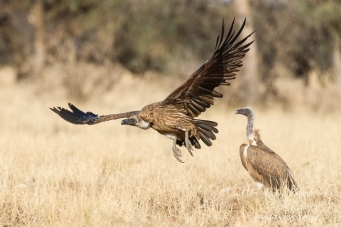 White-backed Vultures circled high overhead, casting dark shadows that sped over the ground and became ever larger as the birds began their plummet to the ground with flared wings and low hanging legs and feet. I sat dead still, afraid to make the slightest movement in case the wily birds caught an indication of my presence. First, one bird cautiously landed, extending it bare neck to look in all directions and then within seconds dozens more vultures arrived and immediately set about feeding on the large Eland carcass.

Sitting in the specially built vulture hide in the Dronfield Nature Reserve that lies on the outskirts of the bustling town of Kimberly, I was able to observe the vultures as they set about their grizzly task of devouring the Eland that had died as a result of the ongoing drought that was gripping the Northern Cape. 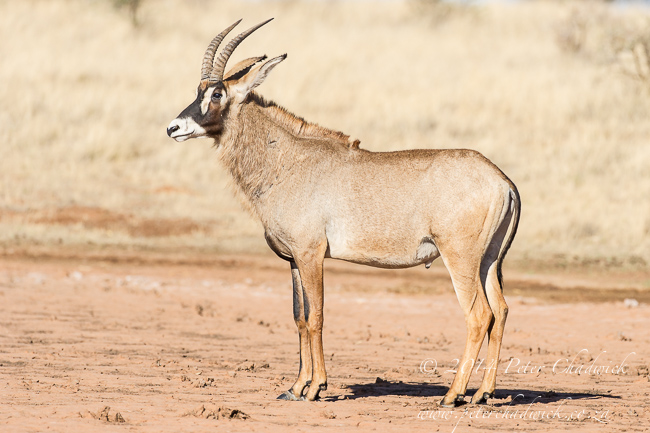 A short distance away, two Pied Crows and an African Sacred Ibis perched in a dead tree watching the scavenging vultures and patiently waiting their turn to be able to glean scraps from the carcass. It was exceedingly hot and the red Kalahari sands shimmered and wavered in a mirage and only the gnarled camel thorn acacias offered any shade. It was here that Chat Flycatchers, Fork-Tailed Drongos and European Bee-Eaters perched with hanging wings and panted heavily. As time passed and the vultures had had their fill, they waddled over to a concrete waterhole, where they bathed thoroughly and then sat with wings outspread and drying in the sun. An hour later, one by one, the vultures took to flight, soon catching a thermal that swept them out of view. As the last vulture transformed into a small speck in the skies, a Tawny Eagle swooped in to land and then spent several minutes bathing and scooping up mouthfuls of water before flying away again. I took this as my gap to also slip away and head back to the coolth of my air-conditioned chalet. 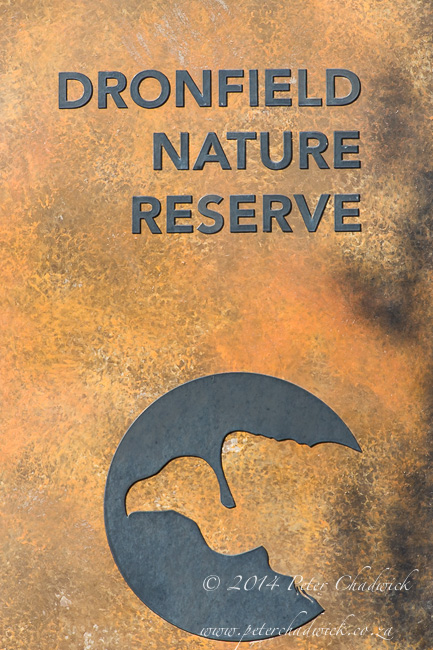 2 of 9: The Dronfield Nature Reserve entrance showing the emblem of the White-Backed Vulture.

As the afternoon shadows lengthened and a slight cooling breeze blew across the arid landscape, I again ventured out and drove slowly along the network of sandy roads that crisscrossed the reserve, allowing me to explore its expansive 12000 hectares. Barely having left the camp, I found a small birding party comprising of Marico Flycatcher, Common Scimitarbill, Cardinal and Golden-tailed Woodpeckers, an Acacia Pied Barbet and a pair of Crimson-Breasted Shrikes. The shrikes hopped around on the ground, flicking leaves and fallen bark in the hope of uncovering a juicy caterpillar or beetle grub. 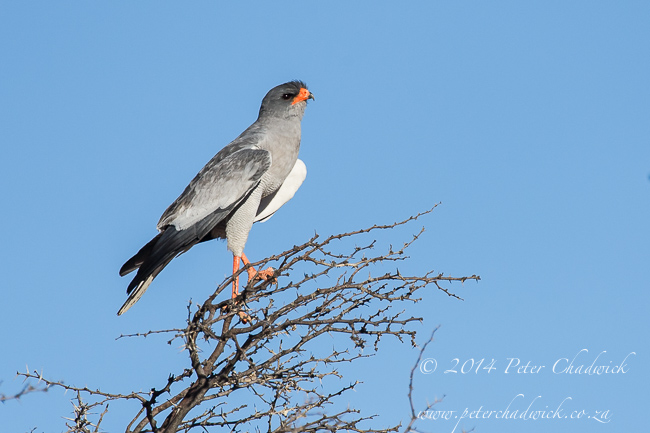 Crossing over onto a large grassy plain, I observed herds of Burchells Zebra, Springbok, Impala and Red Hartebeest grazing lazily in the late afternoon light. Male Northern Black Korhaans took to flight all around, flapping deliberately and calling loudly in ownership of their small patch of the Kalahari. A pair of Pale Chanting Goshawks sat atop different acacia trees, carefully observing the surroundings for the slightest movement of a small rodent or reptile that would quickly become a prey item. Namaqua Sandgrouse flocks winged their way towards distant water while constantly uttering their distinctive "kelkiewyn" calls and as the afternoon wore on, the wind picked up forming dust-devils that spiraled high into the sky where puffy white clouds were forming and bringing the first hints of a promise of rain. 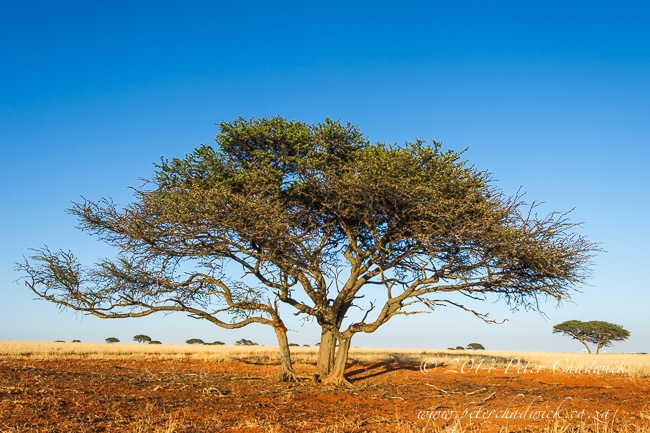 At Blesbok Pan, which still held some muddy water, a large male Warthog wallowed contentedly, being watched by a small herd of long eye-lashed giraffes that seemed amused by the wriggling Warthog that squirmed around to cover itself in the cooling wet brown mud. Cape Turtle Doves, Cape Glossy Starlings, Red-Faced Mousebirds and Yellow Canaries all came down to drink   leaving in a hurry again as a Steppe Buzzard flew and landed in one of the dead trees on the waterholes edge. Barn Swallows and Greater-Striped Swallows made repeated swoops low over the water to scoop up drops and quench their thirst while high above them in the skies, Black Swifts wheeled and turned at high speed. 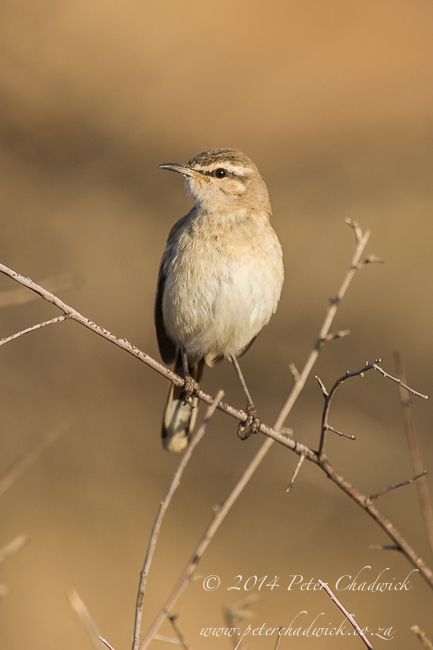 In a grove of young acacia trees, Black-Chested Prinia’s, Ashy Tits and Layard’s Tit-Babblers gleaned insects from between the rough bark as a Desert Cisticola sang from the top of one of the trees. White-browed Sparrow Weavers sat on the ground below the acacias where their scraggly grass nest hung on the outer branches and a pair of Pygmy Falcons preened one another affectionately from within the canopy of the trees. 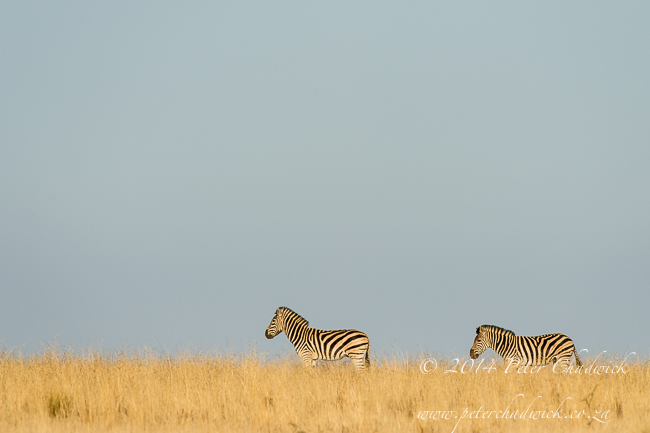 6 of 9: Burchells Zebra on the crest of a dune that is covered in dry grass.

A young Kudu bull wandered over and began to browse on the fresh green leaves that were starting to sprout, reaching high and extending its long tongue to reach an outer branch that had not previously been browsed.  As dusk approached, the animals that had been hiding in the depths of the shade slowly started to emerge and a magnificent Sable antelope bull with its shiny black coat walked proudly across the waving yellow gasses and towards a small herd of Eland that was led by a wary bull that snorted loudly at the approaching Sable. A brief standoff occurred between the two bulls of differing species and after the stare down, the Sable continued on its solitary way. 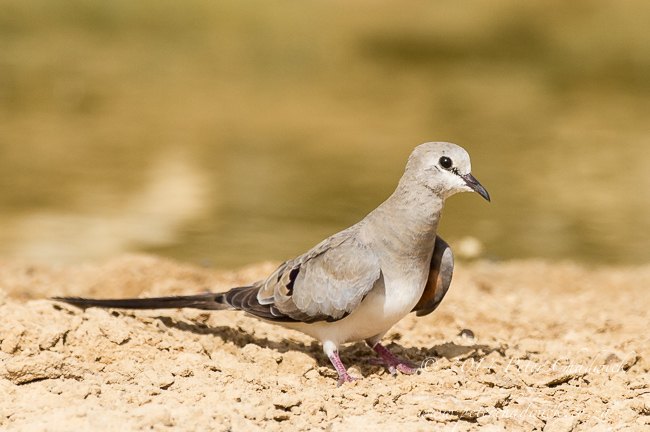 Burchells Sandgrouse pairs wandered out into the open and stood motionless in the dirt tracks, only erupting into the air to fly off as I drove too close to them when my concentration was diverted to watching a flock of Cattle Egrets. The white birds were running rapidly alongside at the feet of a herd of Red Hartebeest that was en-route to a small nearby waterhole. When the hartebeest finally slowed down, the egrets switched their feeding tactics from snatching at insects disturbed by the moving antelope to fluttering up and pecking at fat grey gorged ticks that clung to the hartebeest’s chests and bellies. Deciding to spend some time at the waterhole, I was well rewarded when after the hartebeest, a lone Roan antelope approached cautiously before drinking long and hard from the shallow waters. A White Rhino mother and calf followed and finally a small herd of gemsbok approached, being led by a one horned bull. African Pipits scurried around in the opening and a pair of Spotted Thick-knees first called softly before emerging from their day-time roost deep in the shade of a scrubby acacia. All around, Rufous-Naped Larks began to call and a Rufous-Checked Nightjar flew in and landed briefly before again flying off disappearing into the fading light. 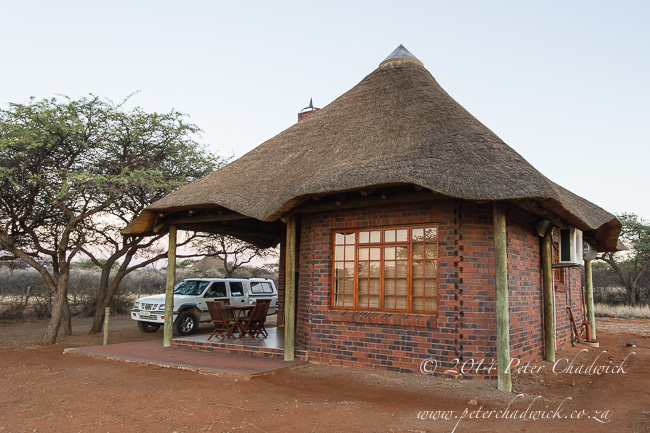 8 of 9: Comfotable self-catering chalet at Dronfield.

Leaving the waterhole, I headed back to my chalet before total darkness swept in. Driving around a bend, I was fortunate enough to view a Spotted Eagle-Owl in my headlights and that was perched in the roadway watching a large and hairy Solifuge battle with an equally large and angry yellow-orange scorpion. The scorpion had its pincers held raised in a forward position as its deadly tail arced overhead and was poised ready to strike. The owl solved the outcome of this confrontation between the two invertebrates by hopping in and grabbing the Solifuge and flying off to devour it in a distant tree. Just when I thought my birding had ended for the day, a pair of Barn Owls flew out of the high rafters of my thatched chalet as I walked onto the verandah to open the door. All around in the darkness, barking gecko’s called out loudly against a brilliant star filled sky that twinkled from the lights of the distant suns, leaving me to wonder what the following day would bring in terms of exciting arid adventures. 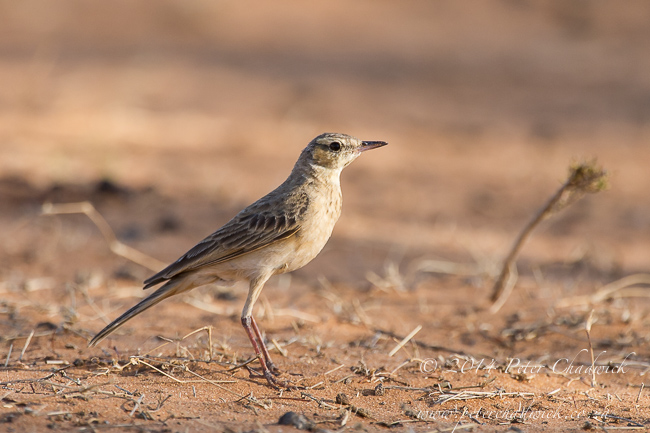 Season & Weather:
Summers can be extremely hot with afternoon thunderstorms. Winters are generally more pleasant but nights can be very cold

The 12000-hectare property has belonged to De Beers since 1888 and was proclaimed as a nature reserve in 2004. Guided game drives can be arranged on request. There are six serviced self-catering chalets available. Conference facilities and a swimming pool are also available