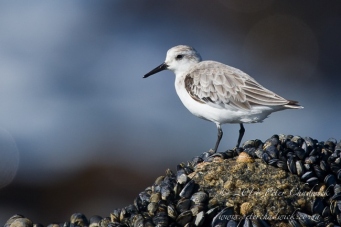 It was a relief to turn off the N7 highway that linked Cape Town and Namibia. The far more peaceful gravel road that we had taken within the Northern Cape headed ever seawards and followed the green artery of Acacia karoo trees growing in a dry riverbed and offered great opportunities for arid birding. Male Southern Red Bishops displayed within the reed beds where Cape Weavers also nested. Namaqua Doves, Namaqua Sandgrouse and scores of Grey-Backed Sparrow-Larks and Red-Capped Larks flew up from the road in front of us in panic as we passed by.

After several hours of driving from Cape Town, we reached our destination when we sighted the Groenrivier Estuary just ahead and we turned off through the entrance gate of the Namaqua National Park. We were warmly greeted by the Schreuders who had an intimate knowledge of the West Coast and all it's natural treasures having lived here for many years. After gaining information on the special spots along the coastal route, we were back in our vehicle and heading towards the campsite of “Kwas se Baai”. Steenbok and Grey Duiker were common sightings as our vehicle churned in low-range through the soft sand tracks and the spoor of Black-Backed Jackal, Red Hartebeest and Porcupine ran ahead of us in the vehicle trail. A family of Suricates with three small young scampered off to the safety of their burrow where they stood near their boltholes and watched us with the deep blue of the sea in the background. A pair of Karoo Scrub-Robins ran between the Suricates snatching up small insects and a Brant's Whistling Rat also joined the party, emerging from a side burrow to sun itself in the warm evening light. Large flocks of European Bee-Eaters swooped low over the stunted vegetation adding flashes of color to the otherwise drab Strandveld vegetation. Endemic Cape Long-Billed Larks and Karoo Larks were regular sightings as they sang from the tops of bushes. 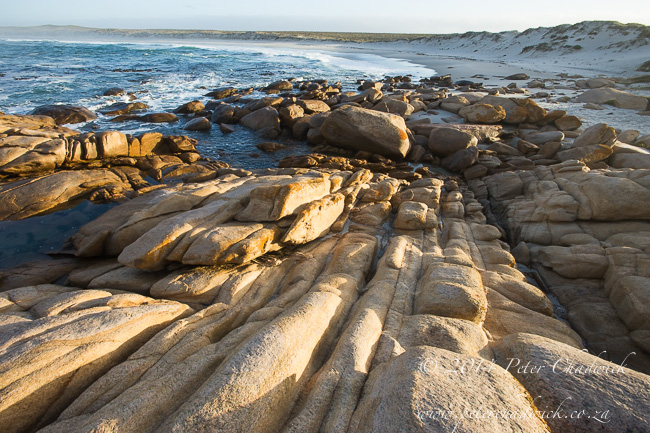 1 of 12. The stunningly beautiful coastline of the Namaqua National Park

Reaching our destination, the open campsite overlooked a large bay with white sands and inter-tidal platforms inhabited by roosting White-Breasted and Crowned Cormorants and Kelp and Hartlaub’s Gulls. Off to one side a pair of African Black Oystercatchers alternately stopped to preen their feathers or probed their long dagger-like bills deep into the sand to pull out small crustaceans. Weathered Granite boulders formed channels where piles of mussel and limpet shells lay thick on the beach and amongst these, Ruddy Turnstones, Sanderlings and Little Stints searched for food. In the shallow waters, kelp beds lay thickly tangled on the surface and small exposed boulders were covered in dense stands of limpets. Swift Terns, Sandwich Terns and Common Terns flittered delicately above the bay, stooping down to snatch a morsel from the seas surface. 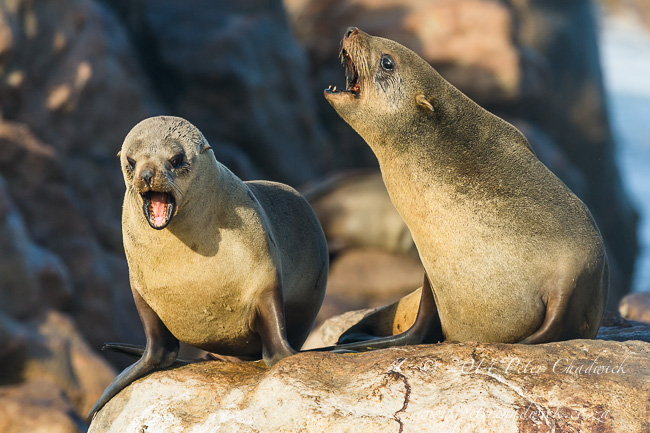 2 of 12. Cape Fur Seals bellow at one another over space to sun themselves.

With the setting sun leaving an orange glow on the horizon, camp was quickly erected and the evening meal was eaten before the chill of the night set in. Somewhere deep in the darkness, the sounds of a thundering sea swell and the haunting calls of Spotted Thick-Knees had me popping my head out of the tent to watch a luminescent phosphorous glow on the sea surface which matched the heavily star studded sky with all of it's sparkling and flickering lights. As the first light of the new dawn cast across the beaches, Grey Plovers, Common Whimbrels, and White-Fronted Plovers were already feeding and surprisingly were joined by a Ruff, which is more often found on inland waters. Cape Cormorants and Crowned Cormorants flew into join a tern roost that lay in the sheltered lee of the bay. Further on the outer-edge of the rock platforms massive five to six meter waves smashed against the coastline with their rumbling power felt underfoot. A Little Egret and three Egyptian Geese were joined by a South African Shelduck on one of the larger and more protected rock platforms. Wandering along the coastline I spent time watching Stone Chat pairs together with a Common Fiscal, Mountain Wheatear and Karoo and Familiar Chats. Cape Wagtails dashed after small flying insects and Grey Tits, Yellow Canaries and a pair of Cape Penduline-Tits foraged amongst the stunted vegetation. 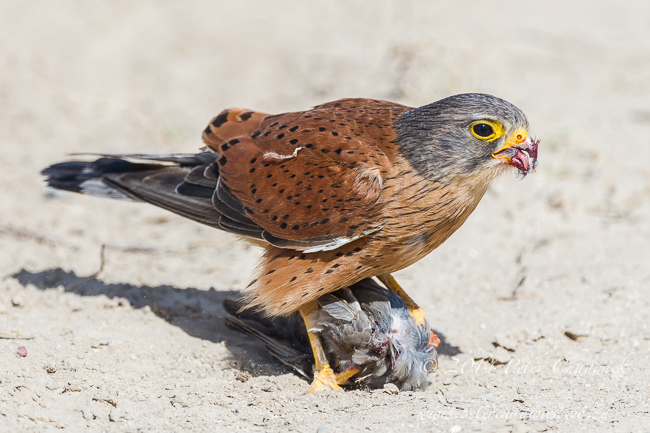 4 of 12. A Rock Kestrel feeds on a small bird that it has caught in flight.

Packing up camp, we headed to Korringkorrel Bay, which for me was the highlight of the trip, for as we arrived, a pod of Heaviside’s Dolphins were frolicking in the gigantic waves, first ridding the curling waves and then leaping out of the back of the breaking wave and somersaulting before diving back into the waters. This spectacle lasted for well over an hour before the dolphins finally moved on. On the rounded granite boulders Crag Lizards sunned themselves and a large mole snake slithered out from a sandy hole to also enjoy the suns warmth. Out to sea, Cape Gannets flew in long white lines just above the seas surface and with patience, I also spotted White-Chinned Petrels, Sooty Shearwaters and even a lone Shy Albatross riding the wave crests and stormy seas. 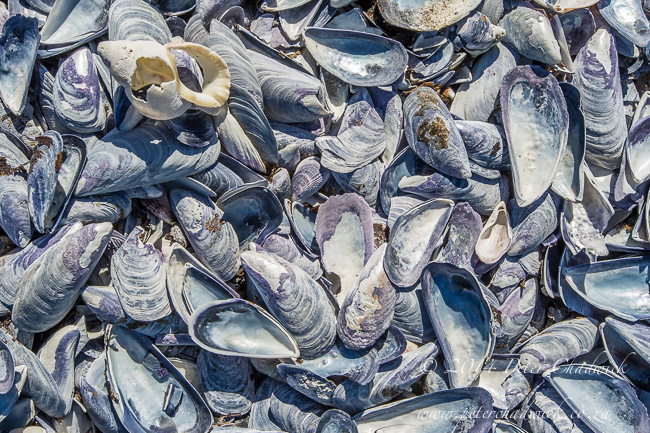 5 of 12. Piles of black mussel shells lie in dense heaps on the beach

After setting camp, further exploration was called for and a short drive brought us to a Cape Fur Seal colony, where by sitting patiently on the road and in the vehicle we observed seal bulls fighting aggressively with fur and blood spattering and watched as mother seals returned to suckle newly born pups that bellowed greetings in hungry anticipation. Kelp Gulls and Sub-Antarctic Skuas patrolled slowly over the colony in search of the seals after-births that were ravenously devoured amongst squabbling between the birds. 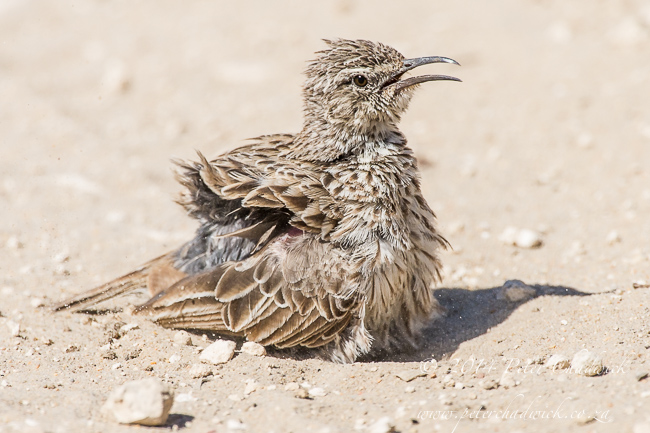 At a small estuary, in the shallow waters, a lone Grey Heron stood amongst Red-Knobbed Coots and Cape Shovellers as Three-Banded Plovers, Chestnut-Banded Plovers and Black-Winged Stilts walked the waters edge. Heading towards the northern boundary of the coastal section of the Park, we drove through waist high veld where a lone Secretary Bird strode out purposefully and a small birding party comprising Long-Billed Crombecs, White-Backed Mousebirds, Karoo Prinias, Namaqua Warblers, Neddicky and Karoo Eremomelas was found. 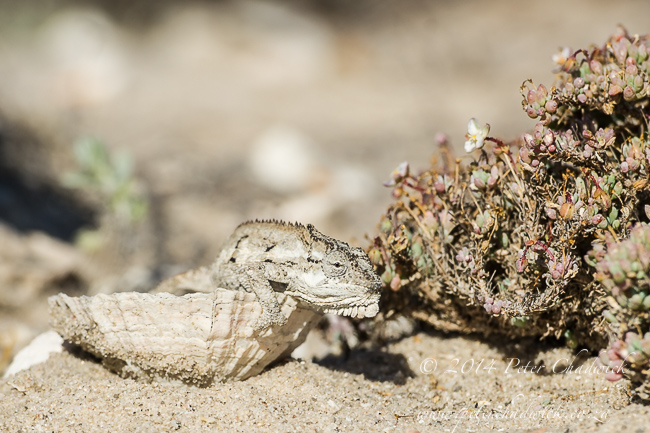 7 of 12. A Namaqua Dwarf Chameleon crosses the high-tide mark of the beach

At the long row of granite caves on the banks of the Spoeg River we paused to watch a Rock Kestrel and Jackal Buzzard having a brief aerial combat session and over the moist wetlands a Black Harrier quartered backwards and forwards with occasional stoops into the tangled vegetation. By the time we returned to our camp over–looking Koringkorrelbaai, the large orange globe of the sun was starting to melt away into the sea at the end of a glorious day of exploration of this still largely wild and un-explored coastline. 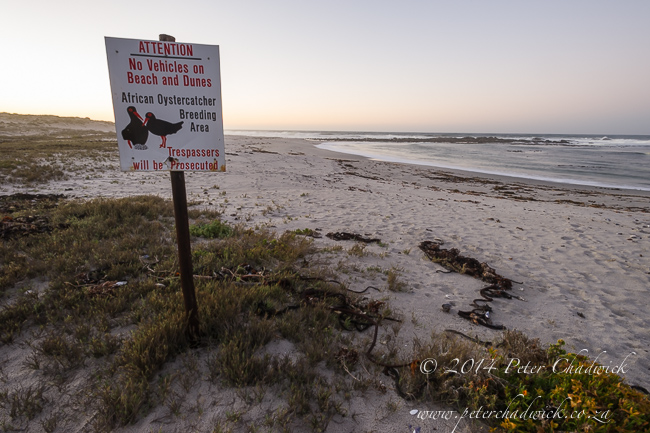 Season and weather: The climate is temperate with low winter rainfall, mild days and coastal winds. Evening can be cold. Sunblock and warm clothing are both essentials. The best time to view the flowers is during the months of July to September. 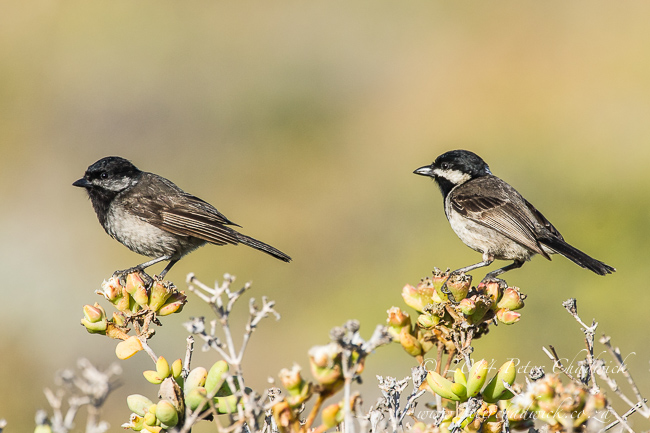 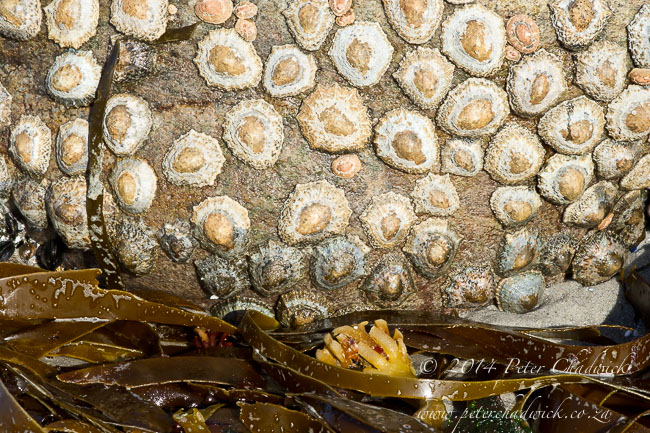 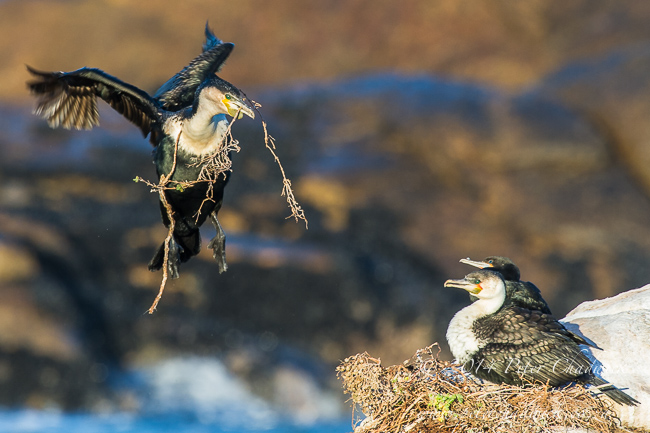 11 of 12. White-Breasted Cormorant landing on its nest with nest-building material.

Getting There: Follow the N7 between Cape Town and Springbok. At Garies turn westwards towards the coastline and follow the signage for approximately 60 – 70kms to the Groen River estuary. The entrance to the park is well signposted. 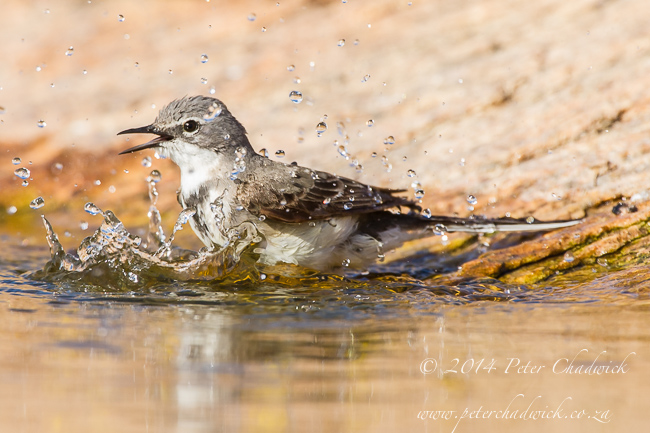 12 of 12. Cape Wagtail bathing in a shallow rock pool.