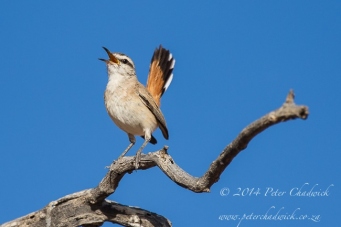 Twenty years ago, when I first visited the Northern Cape and the Kalahari Gemsbok National Park, as it was known then, access to the park was via a rough gravel road that seemingly went on forever and that wound through the red sand dunes leaving one feeling seasick from driving between the crests and dips of the dunes. Today, an excellent tar road and an air-conditioned vehicle makes the 250-kilometer trip from Upington to Twee-Rivieren a piece of cake and there is a large and modern reception with friendly efficient staff to greet ones arrival. The park has now also changed its name to the Kgalagadi Transfrontier Park, allowing travel between South Africa, Botswana and Namibia. Despite these upgrading of facilities over the years, the true wildness of the Kalahari remains much the same as it always has, making it one of the prime tourist and birding destinations in the country.

Despite numerous attempts, it had been several years since I had last visited the park and it was with much anticipation that I drove up to the entrance gates on my most recent visit. I hopped and fidgeted like a small eager child to get through the formalities of booking in at reception and quickly flung my gear into my overnight chalet so that I could drive out along the dry Nossob riverbed with its ancient and knarled camel thorn trees. The intense summer heat of the day was beginning to dissipate as late afternoon shadows reached across the landscape. Birds and animals were slowly becoming active again after several hours of inactivity hidden deep in the shade and away from the searing rays of the sun. 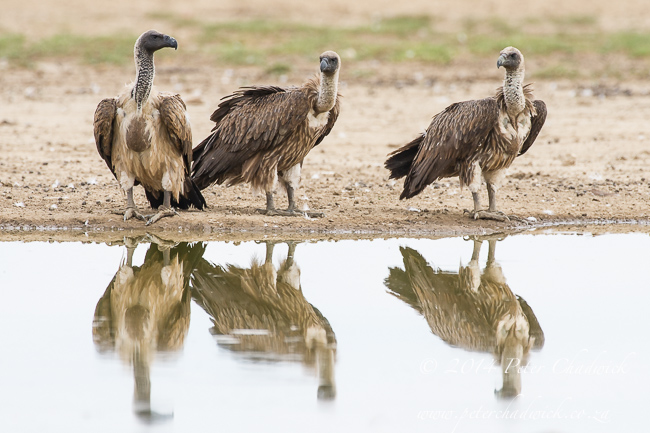 Within barely a few minutes of driving up the Nossob riverbed and at the entrance to the game viewing area, I reached the Samevloeing waterhole that attracted a constant flurry of small birds with sociable weavers, Cape turtle doves, Namaqua doves, yellow canaries, scaly-feathered finches and violet-eared waxbills all coming down to drink. In the trees above and around the waterhole, dusky sunbirds, common scimitarbills, Marico flycatcher pairs, black-chested prinia’s, a golden-tailed woodpecker and a groundscraper thrush all searched for an evening meal and teased an indication of just how rich in biodiversity these arid lands actually were. 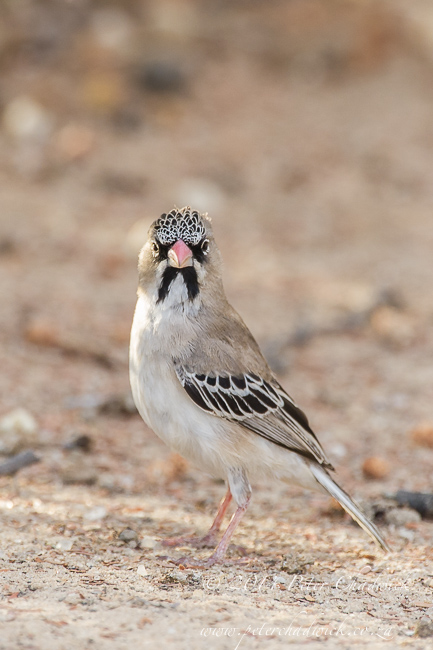 Further along, pale chanting goshawks sat regally in the crowns of the acacias, surveying the landscapes around them in the hope of spying a small tasty morsel and ducked with disdain when the cheeky fork-tailed drongo’s boldly dive-bombed them. An African wild cat made the mistake of causally wandering across an open area and was immediately mobbed by a flock of angry scaly-feathered finches that quickly set the cat into a trot back to dense cover. 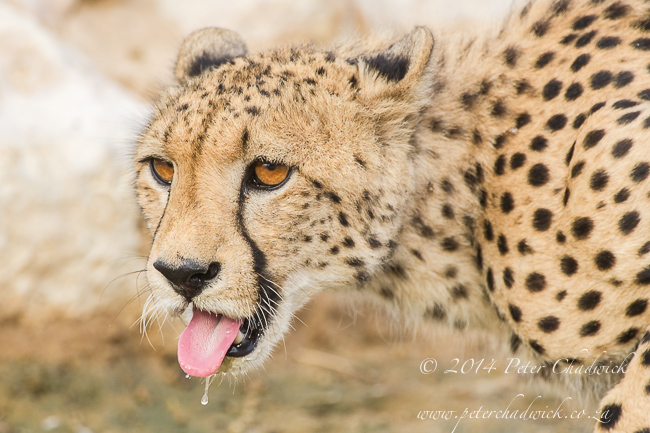 With little time still available before gate closing, I slipped up onto the road that linked the Nossob riverbed with the nearby Auob riverbed and which traversed a short section of the red dune field. It was here that the peacefulness of the Kalahari truly set in with the sounds of numerous barking gecko’s pock-pocking all around and with Brants whistling rats scurrying around grabbing pieces of vegetation to chew on. A porcupine wandered casually between gemsbok and the wavy green grasses while northern black korhaan males stood proudly calling in the evening light. It was truly awesome to be back in the Kalahari!

Up and packed by 04h30 the next morning, I sat on the edge of the verandah of my chalet drinking a cup of coffee and listening to the pearl-spotted owls, spotted eagle-owls and rufous-cheeked nightjars calling as the skies changed from a star-studded black through to a deep blue that became tinged with purples, oranges and yellows as the sun rose ever higher towards the horizon. The 160km trip up the Nossob riverbed to Nossob camp would take several hours and I was keen to head out as early as possible so as to maximize both the photographic light and the time when animals and birds were most active. 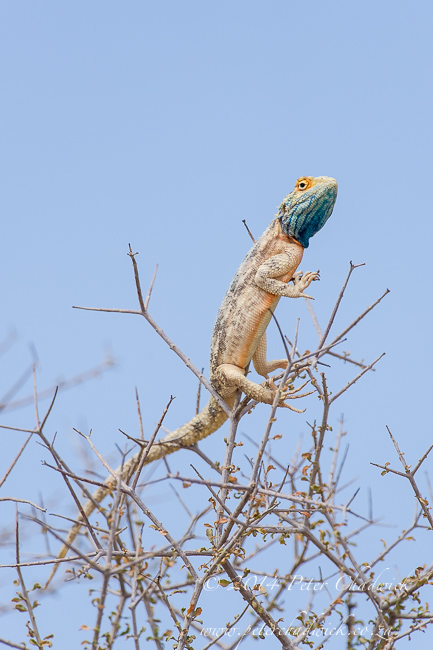 Between pronking springbok, wandering gemsbok and scurrying black-backed jackals the birding was excellent with constant stops at pygmy falcon pairs, bateleurs and black-chested snake-eagles perched high in dead trees, fawn-coloured larks feeding in sandy areas and watching common fiscals with their distinctive white-eyebrows that are only present in the western race of the species. At one point a rush of termite activity attracted feeding Kalahari scrub-robins, ant-eating chats, fork-tailed drongo’s, chat flycatchers, and southern masked weavers. 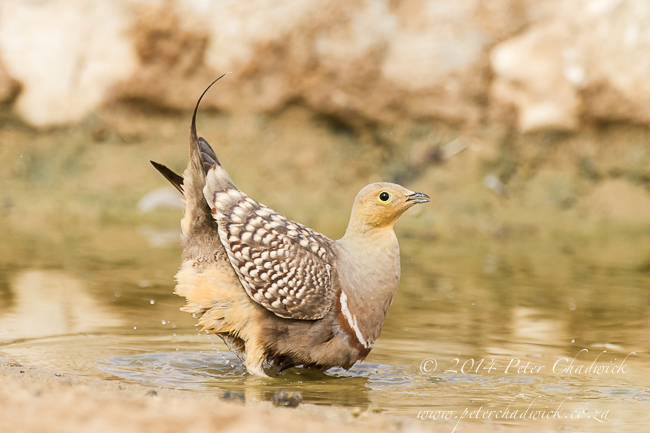 At Melkvlei picnic-site a pair of spotted eagle-owls had made their nest in the fork of a large acacia and now sat perched nearby and watching over their fluffy and large yellow-eyed chick. Below the tree, white-browed sparrow-weavers scuttled between the ground squirrels and yellow mongooses, picking up the crumbs from previous picnickers who had stopped for a morning break at the picnic-site. 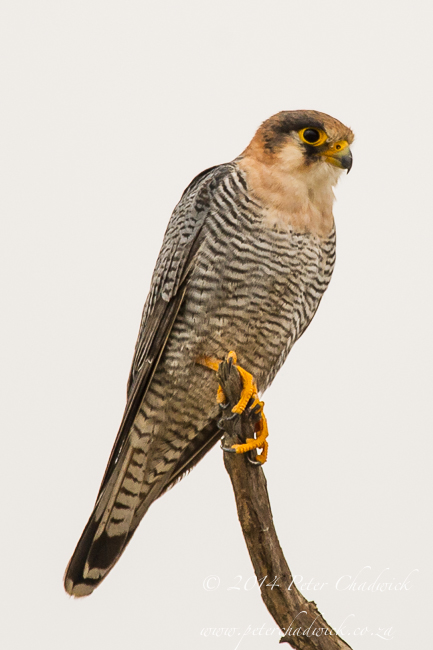 Heading ever northwards, I pressed through a snarl up of traffic around a sleeping lion pride and enjoyed watching three male cheetah watching and hunting springbok, only moving on when they disappeared out of sight into the dunes. At Dikbaardskolk picnic-site, I took the opportunity to stretch my legs and spent a happy half-hour watching the sociable weaver flocks feeding ravenous chicks recently fledged from the nest. A pair of stunning looking crimson-breasted shrikes where also feeding hungry chicks and the Cape glossy starlings were busy pairing up with the males offering gifts of food to the accepting females. 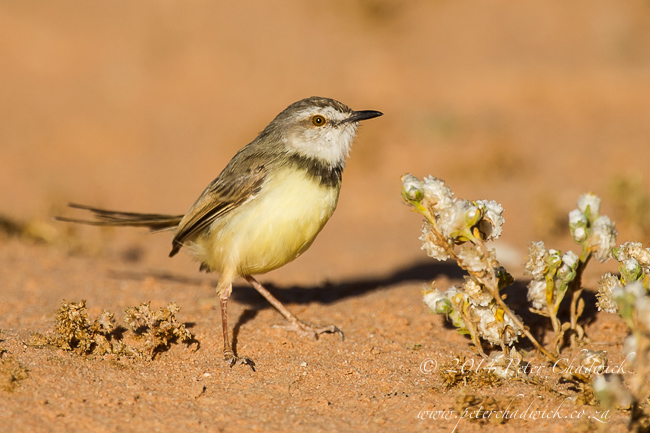 Nossob camp was finally reached in the heat of the day and at the various taps around the camp, red-headed finches, shaft-tailed whydahs and black-faced waxbills were drinking. A late afternoon drive that took me as far as Kwang waterhole was extremely productive with bathing secretary birds, tawny eagles, bateleur and a gathering of white-backed vultures that huddled around the waters edge and eyed the skulking black-backed jackals with contempt. The nervously drinking doves and sandgrouse flew up in panic as a pair of red-necked falcons and gabar goshawks swooped low over the waterhole and then landed in a nearby dead tree.

Returning back towards camp, I spent an entertaining hour before gate closing watching a pair of bushveld shengis searching for seeds and small insects below the stand of young acacia trees that grew next to the Cubitje Quap waterhole. The shengis scampered between skinks, layard’s tit-babblers, Marico flycatchers and Kalahari scrub-robins that were all feeding constantly begging chicks. 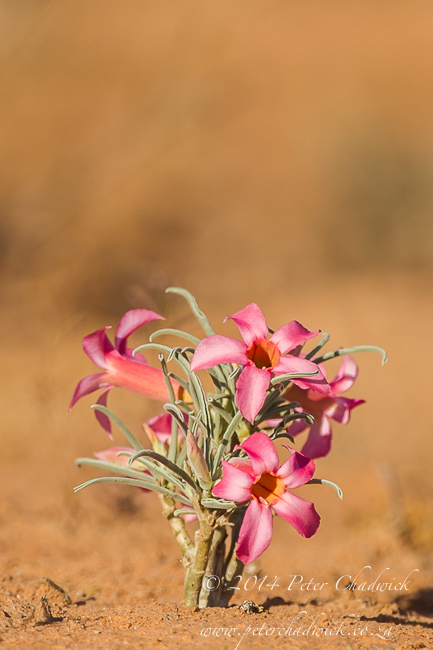 10 of 12. Desert blooms - spring brings a variety of flowers coming into bloom.

This same waterhole at Cubitje Quap was to be the location of the highlight of my Nossob trip the next morning when hundreds of Cape turtle-doves flew down to the waterhole to drink between swarms of buzzing bees and flocks of Namaqua and Burchells sandgrouse. A black-backed jackal has made this specific waterhole globally famous through it’s perfecting the hunting of these drinking birds. The jackal would lie “innocently” and apparently fast asleep next to the waterhole but always keeping half an eye open on the drinking birds.  Once enough birds had gathered to drink, the cunning jackal launched a lightening fast chase, attempting to snatch a hapless bird in mid-air. These chases often included dashes through the water, splashing it in waves high into the air and adding to the intensity of the situation. Sadly for me, but happily for the birds, and despite repeated attempts, this wily jackal was unsuccessful in catching any bird while I watched and as soon as the sandgrouse stopped arriving to drink, he trotted off elsewhere to search for food. With so much already having happened in a short 24-hour period, I was really looking forward to spending the next five days re-exploring this amazingly diverse and action-packed park. 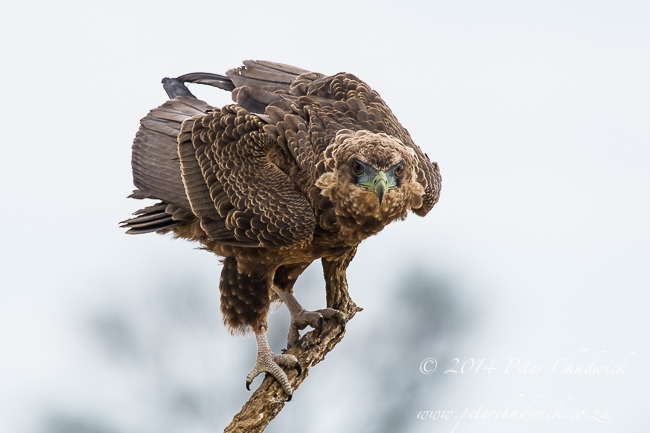 Season and weather: This is a harsh and unpredictable land where water is scarce with less than 50mm falling per year. Temperatures in summer are extremely high while nights can be chilly. Night-time temperatures in winter can fall to minus 10 degrees C. 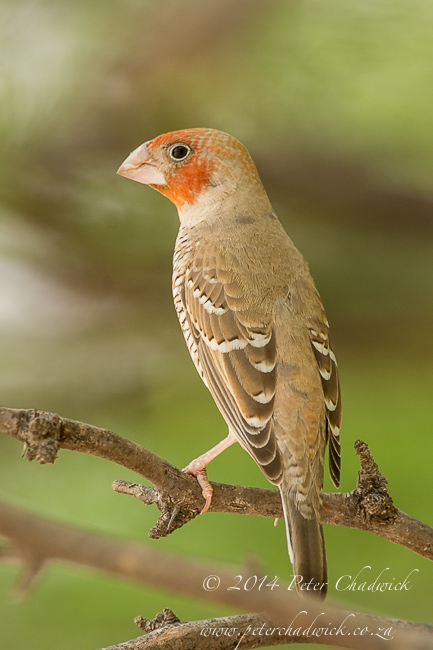 Getting There: The Kgalagadi Transfrontier Park is most easily reached from South Africa via Upington. The entrance to the park lies 260kms north of Upington and is well signposted