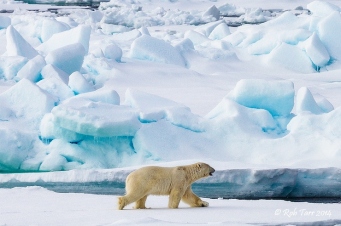 Rob is a marine biologist who has worked in the field of fisheries research for over 30 years, including over 1000 hours spent underwater during his time studying the abalone populations of the western and eastern Cape.  He presently manages a group responsible for scientific advice on a range of inshore fisheries.

“The past few years has seen my interest and commitment towards photography increasing significantly, to the extent that I could see myself pursuing this as an alternative to my present career, should the right opportunities arise. Areas that are close to my heart are, essentially, anything marine related, but in particular conservation issues – including the challenging arena of sustainable fishing. That might sound like a contradiction - but although our oceans are in serious need of conservation, they also have huge potential to provide – in many ways – and this potential needs to be managed properly.”

This portfolio was compiled during a 9-day expedition, which Rob described as the trip of a lifetime, when they explored the coastline of Spitsbergen aboard the Russian expedition vessel, the Akademik Sergey Vavilov. This was the Oryx Award, won by him in the 2013 photographic competition: Oceans of Life, organized by Birdlife South Africa. The theme of the competition was to celebrate marine life in general, to show how diverse, beautiful and inspiring marine life is, and his winning image showed a group of 3 Cape gannets in beautiful evening light. 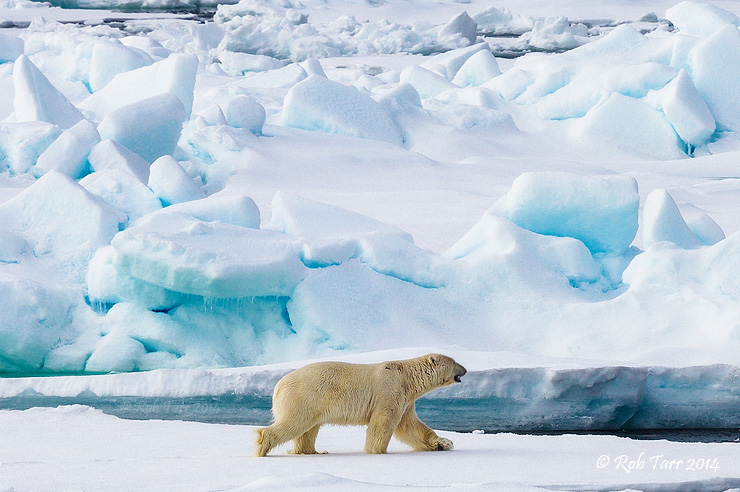 1.One of my favourite images simply shows a polar bear wandering through its environment, ever-alert for the scent of opportunity. We followed this animal from the expedition ship, which was able to manoeuvre through the ice without approaching too close to the bear. This image shows up the fairy-tale beauty of the arctic snow-scapes, with patches of blue ice in the white landscape. 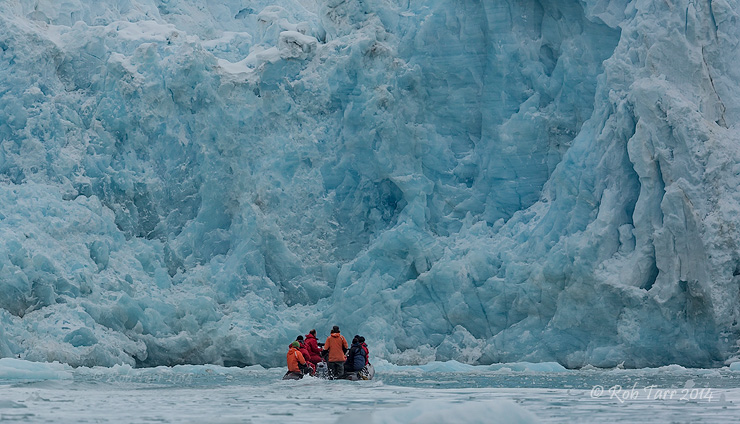 2.The glaciers of Spitsbergen are spectacular - but seeing them up close and personal like this drives home even more the fact that something so immense is also feeling the effects of global warming. 90% of the world's glaciers are receding, and contributing to global sea level rising. The optical foreshortening effect of the telephoto lens means that the zodiac boat is not as close to the glacier as it looks. A safe distance is always kept, to avoid the potential danger from large chunks of ice calving off into the ocean

3.This beautiful blue iceberg caught our attention, with its attendant group of black-legged kittiwakes.  After photographing this scene, I looked for some detail and composition – see below. 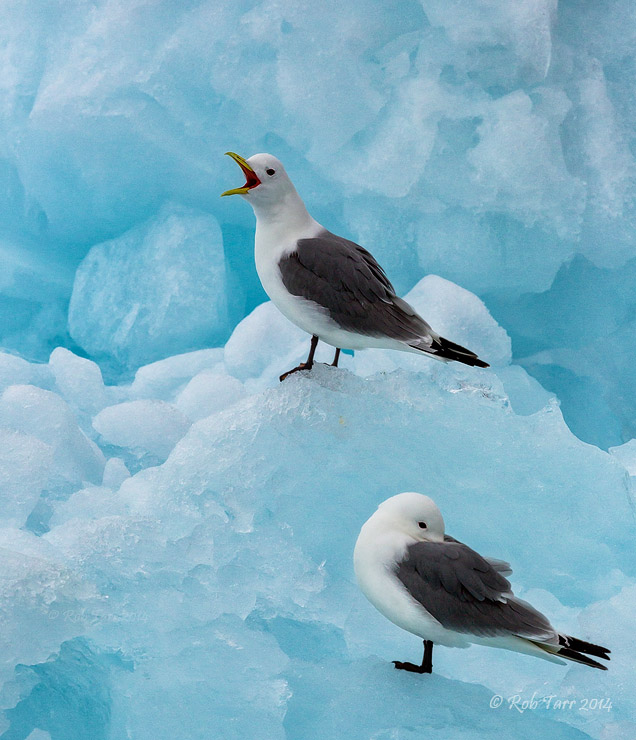 4. These two provided, for me, a comical scene, with one bird trying to catch forty winks while the other was squawking and making a noise nearby. 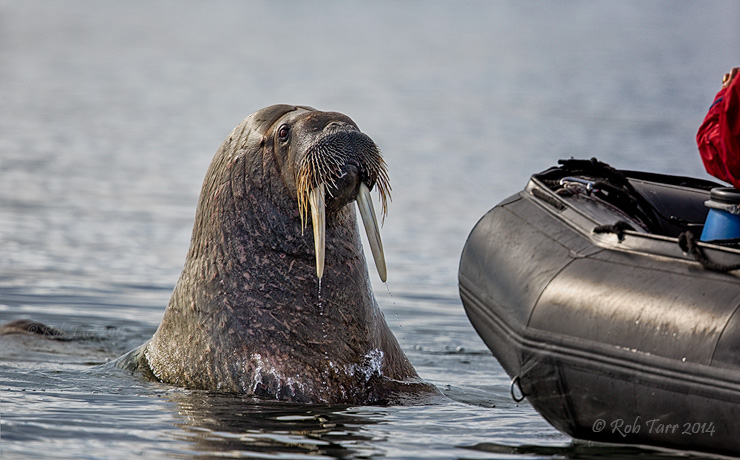 5.This was a complete show-stopper, and one of the highlights of our trip! We were waiting for a pod of feeding walruses to appear, when they suddenly surfaced right in front of an adjacent zodiac boat! Then one large fellow did a few spy-hop surges out of the water to have a good look at the occupants in the boat! What an impressive sight that was - a huge bonus for the trip! And a lovely interaction between animal and human - equally curious about the other. 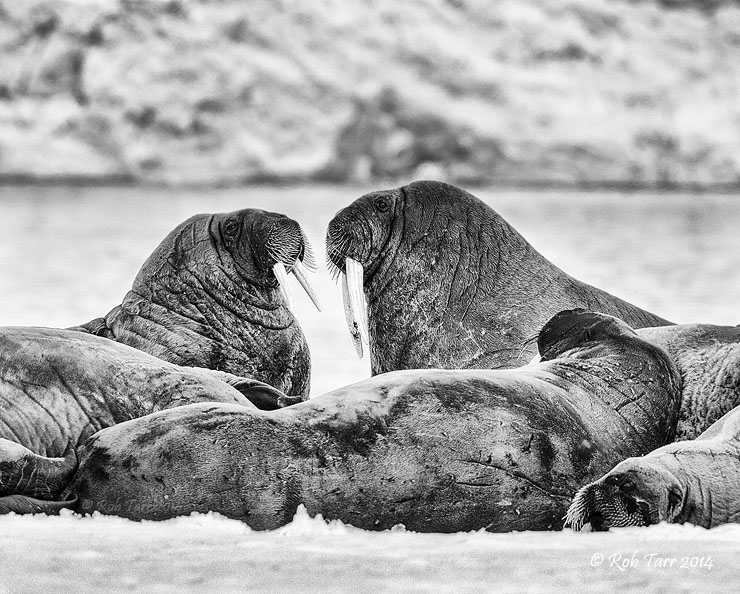 6. A pair of walrus facing off, with a glacier in the background. What made this sight even more special was the fact that the walrus were on snow, not a pebbly beach, and had a glacier as a backdrop! Converted to B&W to focus attention on the pair, and the textures of their faces and bodies. 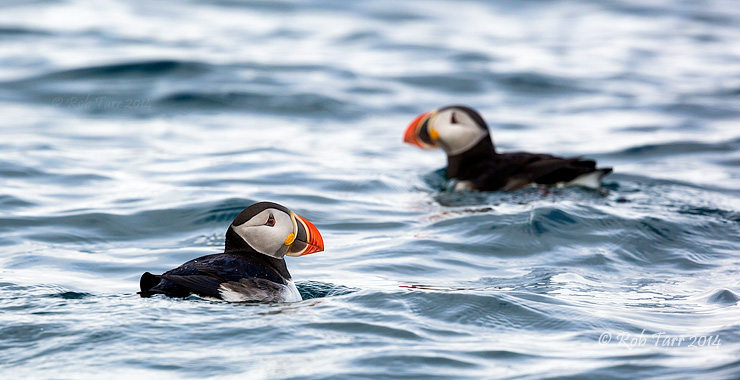 7. A pair of atlantic puffins - such a treat to get to see these iconic, comical-looking arctic birds. Also known as "clowns of the sea" 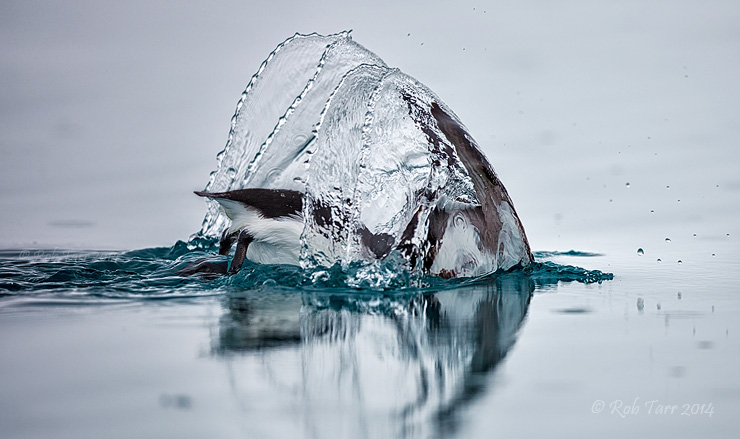 8. I lost count of the number of attempts I made to capture a diving Brunnichs guillemot in action, but all the effort was worthwhile with this one and only image that succeeded.  This frozen moment made all the effort worthwhile. 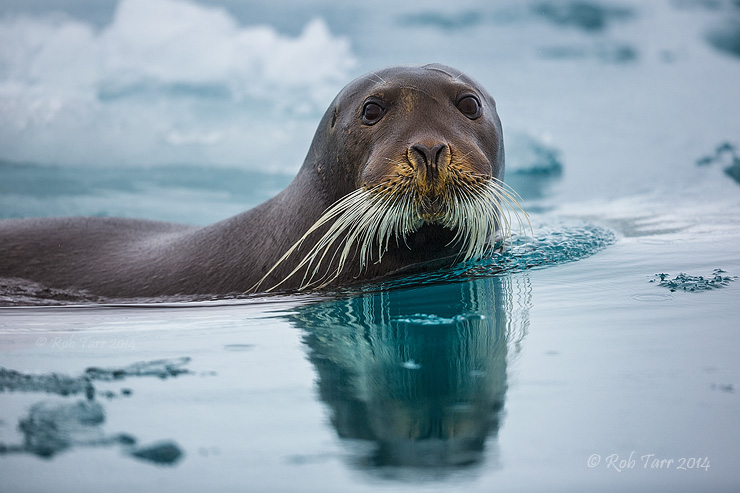 9. An absolute favourite of mine, this rather debonair looking bearded seal swam up towards us from quite a distance to have a good look, before going on his way again. The prominent whiskers are aids in locating food such as clams and squid on or near the seabed. 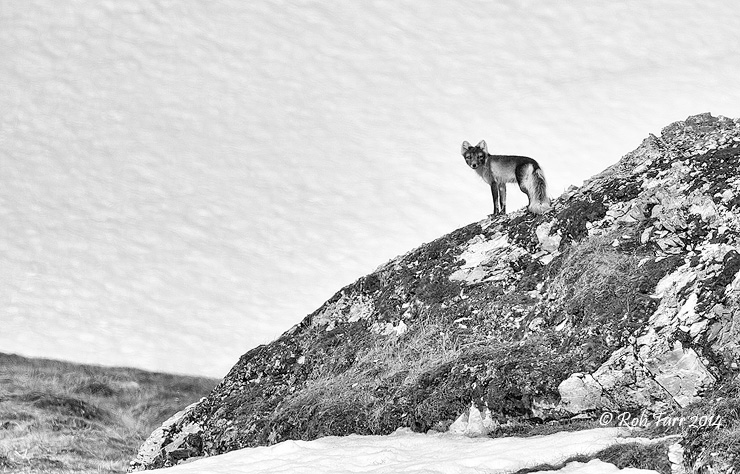 10. The arctic fox makes a living in one of the most extreme climates on the globe, and a big part of that revolves around keeping warm - their fur is even warmer than that of the polar bear! This one had set up a territory at the base of a cliff supporting thousands of nesting kittiwakes - which would provide plenty of opportunity to steal eggs and chicks. While tracking the movement of this little fellow I saw it heading up the side of a rock that would leave it nicely profiled against the snow behind, so got ready for the shot. It then very kindly stopped and looked back at just the right time! Thank you! 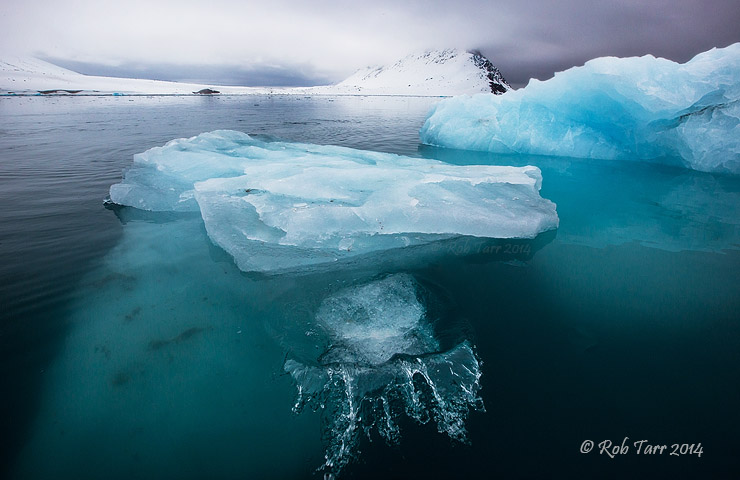 11.Sometimes, one just has to rely on luck. While I was photographing this iceberg landscape, a piece of ice broke off somewhere underwater, and popped up to the surface just as I pressed the shutter! A magical moment! 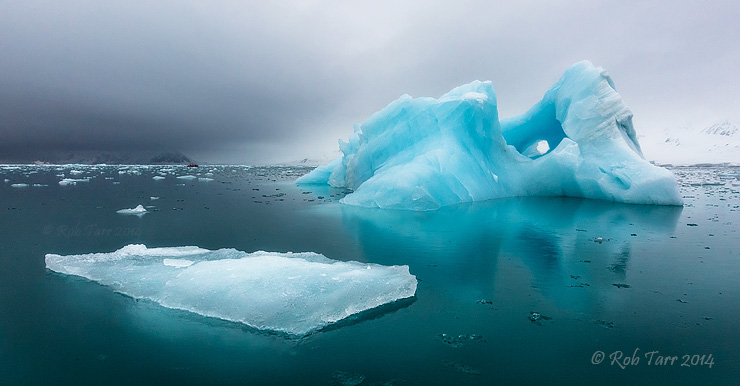 12. A beautiful iceberg produced when the glaciers calve off chunks of ice into the ocean. I chose this composition because of the contrast between the rectangular 'berg in the foreground and the curved, irregular lines of the larger blue iceberg. (The blue colour is produced over time as the pressure in the glacier squeezes the air bubbles out of the ice.) If you look carefully you can spot one of the zodiacs (inflatable boats) in the far distance, with red-jacketed fellow-explorers.

13. A stitched image combined from a sequence of 4 overlapping images, this iceberg grabbed our attention immediately. The weathered layers of accumulated snow that make up a glacier, and hence an iceberg, made for a very photogenic subject. The expedition vessel is in the distance on the right. 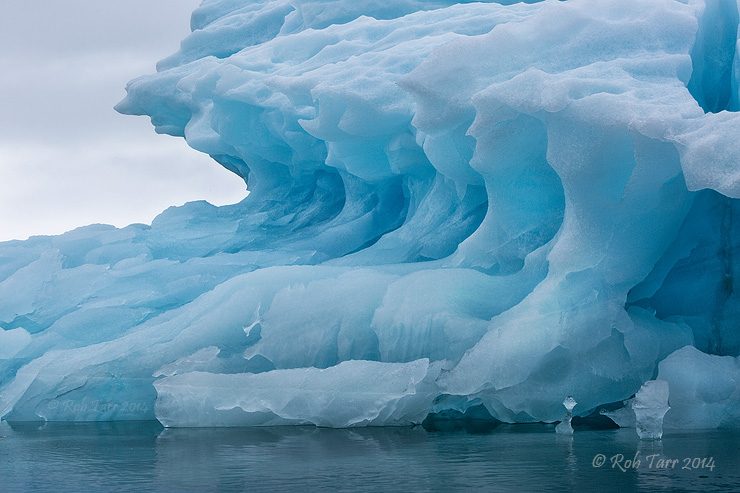 14. The previous image shows this beautiful blue 'berg as a whole, but we had the opportunity to do a few circuits around it, and look for special compositions. This repeating pattern of ridges caught my eye, and I took a series of images as we moved past, until they lined up "just right". 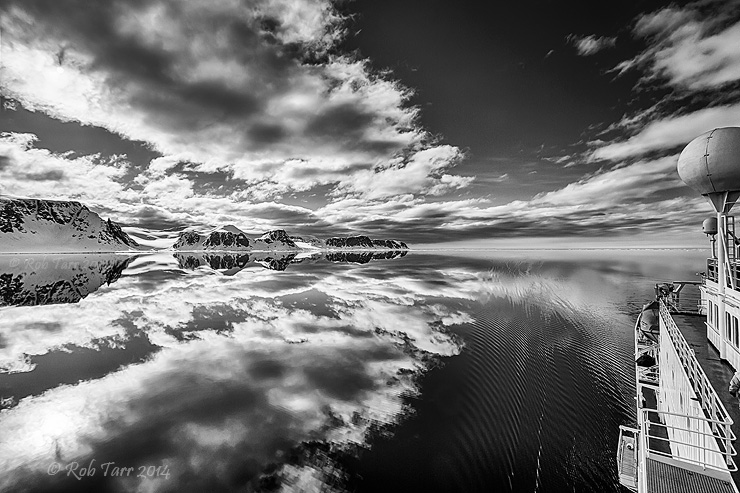 15. The landscapes in the fjords were breath-taking, especially on the few days when there was a combination of clouds and blue skies. This was one such day, when I also noticed the ripples from the ship on the glass-smooth surface as we glided slowly along, searching for the elusive polar bear. I converted this image to monochrome, emphasizing the contrasts, as this image is all about textures and patterns, and the colours were distracting.

16. On some days the weather was just perfect!  Here the mirror-like water and the clouds combined to produce a mesmerising image, where one can imagine things like an alien face in the reflections. This was stitched together from a sequence of 7 overlapping images. 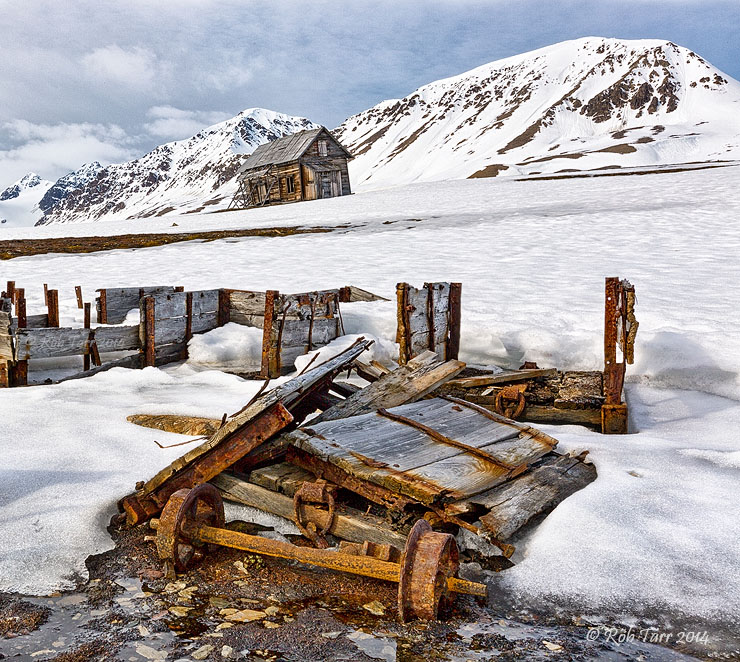 17. A landscape scene from Spitsbergen. Remnants of mining and whaling activities can be seen in some areas, such as these old rusted trolleys. The house in the background is collapsing, and being supported by poles. It is also shown in the following image. 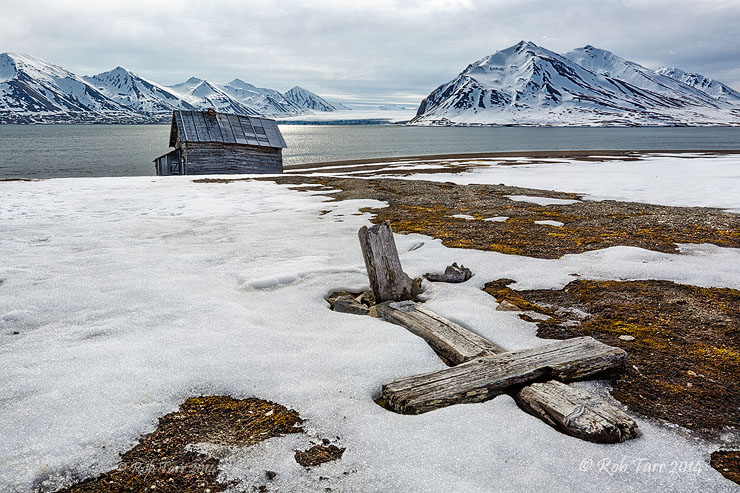 18. One of the many intriguing and beautiful landscapes we encountered during our shore hikes. Here a broken cross bears testimony to the harshness of the arctic environment – further emphasised by the run-down building slowly collapsing in the background, as it subsides down the slope – a victim of the unstable ground that freezes and thaws every year. 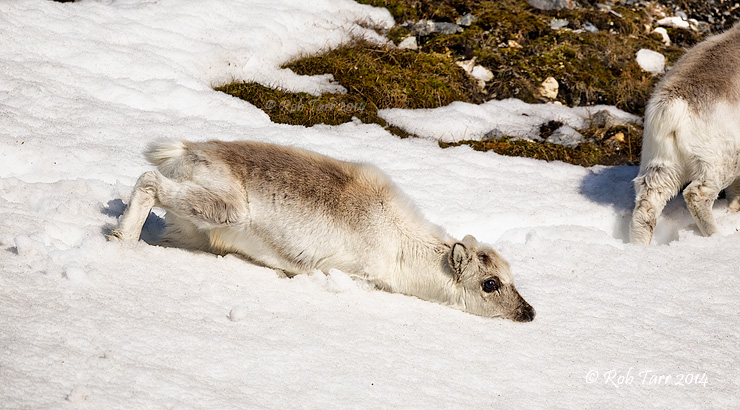 19. To finish off, some humour: It was funny watching this young svalbard reindeer crossing a stretch of snow and occasionally plunging in up to its chin! The look of surprise each time was so comical. I mean - these are REINDEER, they're supposed to be snow-savvy!

Rob qualified as a Fellow of the Photographic Society of South Africa (FPSSA), and was recently awarded the status of Artiste of the International Federation of Photographic Art (AFIAP).  His images have been published in a variety of books, magazines and scientific publications.

All text and images are © Rob Tarr and used with permission