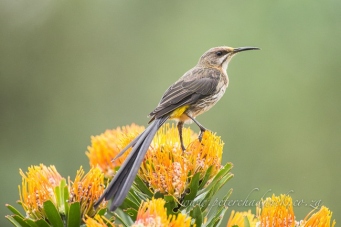 The southern tip of Africa has a lot to offer, from spectacular scenary, top birding, colorful flowers and the mystique of being at the tip of the African continent.

Flocks of Blue Crane flew overhead to land in an open field where they proceeded to prance and dance with one another for several minutes before finally settling down to feed amongst Crowned Lapwings and a large flock of over sixty Ostriches.

In the distance a pair of dainty Steenbok walked through their territory, scent marking and stopping to feed occassionally on fresh leaves growing on the numerous shrubs. A Capped Wheatear emerged from an underground rodent burrow where it must have had a nest with youngsters and flew up on to a fence post. It chirruped briefly, fluffed its feathers and continued looking for fat juicy insects that it could feed to its ravenous chicks.

A carpet of colour spread across the landscape with pinky purple from the ericas, blood red from the Brunvigia orientalis and oranges, whites and yellows from the variety of daisies and Oxallis species. Agulhas National Park at the southernmost tip of Africa was already showing off and I had barely even begun my weekend visit to this national gem. 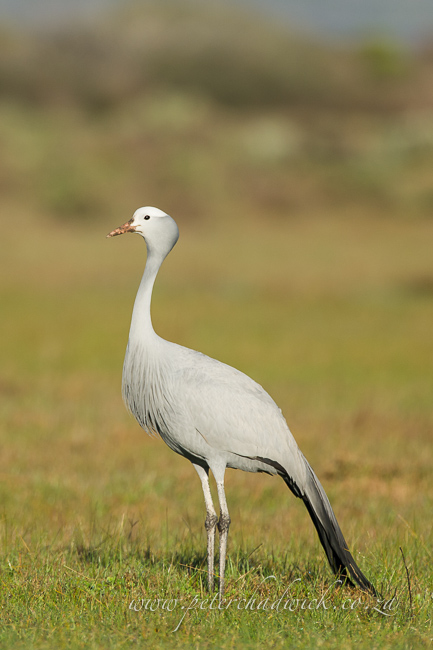 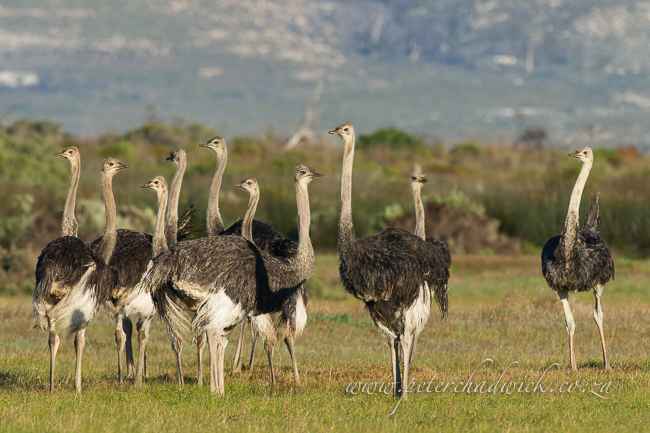 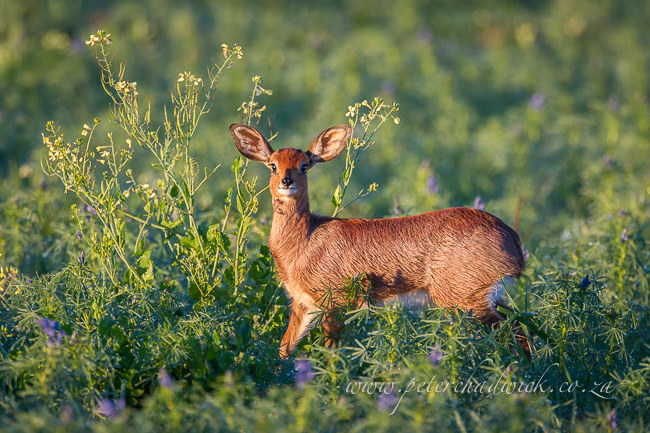 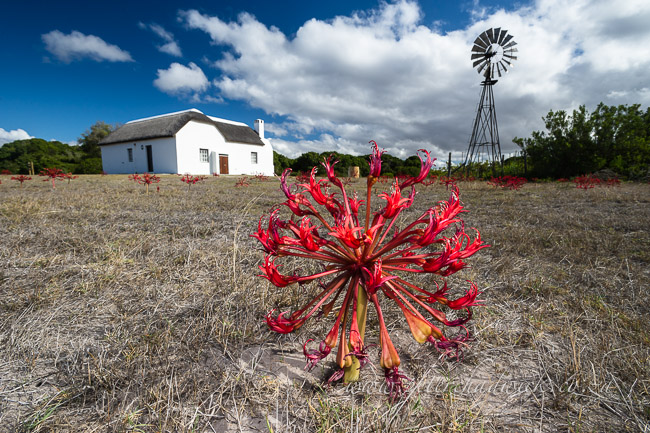 After making the mandatory stops at the Cape Agulhas lighthouse, the oldest working lighthouse in South Africa and at the shipwreck, my family and I settled into our wooden chalet in the Agulhas National Park rest camp. Stepping out onto the deck, I noticed a pile of feathers on the wooden flooring and looking up watched a Rock Kestrel as it plucked at the remains of its small bird dinner. On seeing me, it quickly flew off to a more peaceful location. Ahead of me vistas of a tranquil lagoon and long sandy pebble beach coastline enticed me to hurry the family for an evening walk alongside the breaking waves. 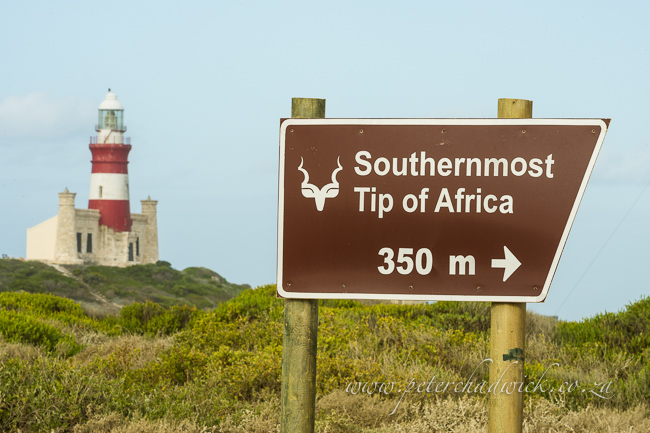 5. Southern Tip of Africa and lighthouse.

A narrow trail lead from our chalet to the coast through low coastal scrubveld where Karroo Robin, Karoo Prinia, Bar-Throated Apalis, Bokamakierie and Southern Boubou were found feeding amongst the tangled undergrowth. Shoes were flung aside as we reached the soft white beach sand and a walk along the coast ended up being extremely slow due to the constant finding of new interesting items amogst the debirs that had been washed ashore amongst – sea fans, the egg case of an endemic cat shark, sponges washed ashore from deeper waters, fingerling Mullet feeding in the shallows, a Khoi-San shellfish midden and the casings of various species of crabs. In amongst the rock-pools my daughters found sea-urchins, starfish, cushion stars, crabs, periwinkles, klipvis and an octopus that changed his colour as it moved through different pools trying to match its surroundings and camouflage itself. 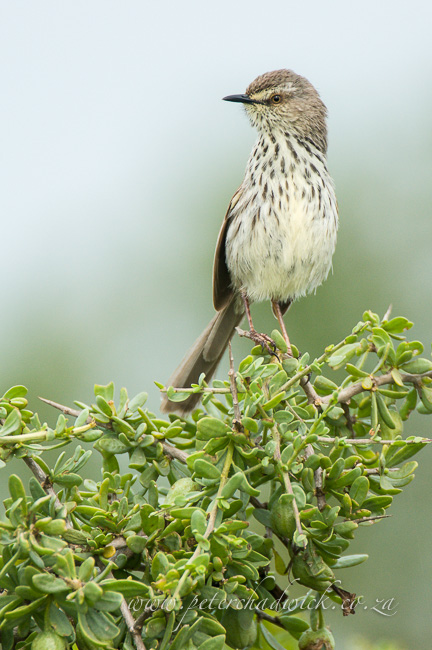 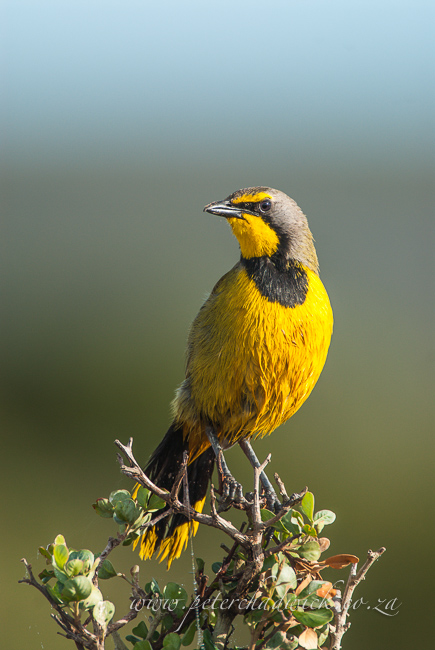 Birds were also plentiful with pairs of African Black Oystercatchers either feeding amongst the rocky boulders or in the wavebreak zone where they probed their long dagger like orange bills deep into the sand to capture buried invertebrates. White-Fronted Plovers scuttled up and down the beach front at high speed, occassionally being joined by Sanderlings and Ruddy Turnstones. On an outer rocky penninsula, a flock of Swift, Sandwich and Caspian Terns roosted together with Cape and White-breasted Cormorants as Kelp Gulls and Hartlaubs Gulls patrolled overhead. A scan far out to sea with binoculars showed White-Chinned Petrels, Sooty Shearwaters, Corys’s Shearwaters, Sub-Antarctic Skuas and a lone Shy Albatross riding the swells as trawlers hauled in catches from the rich fishing grounds. With dusk starting to settle in we pulled ourselves away from the peacfully isolated coastline and headed back to our chalet to braai on the deck and watch a glorious star-studded sky increase in brightness the darker it became. 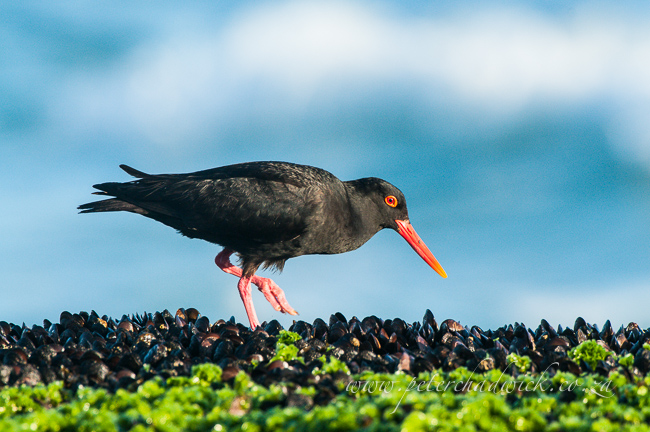 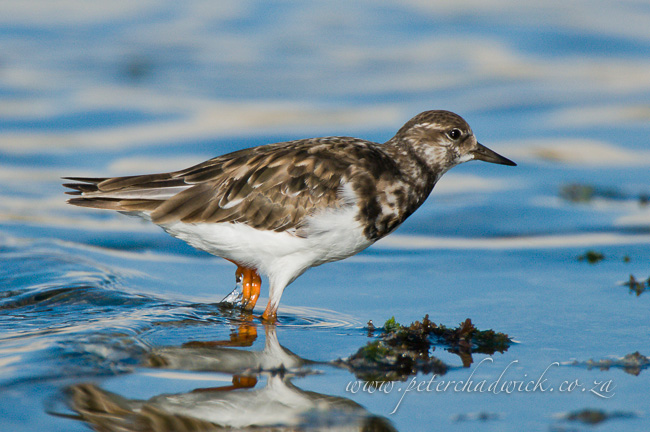 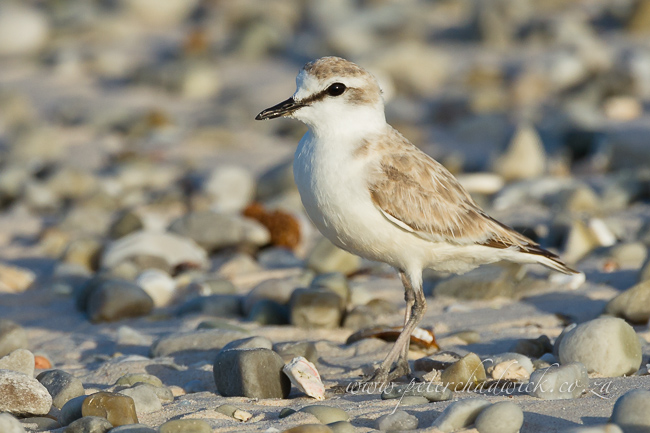 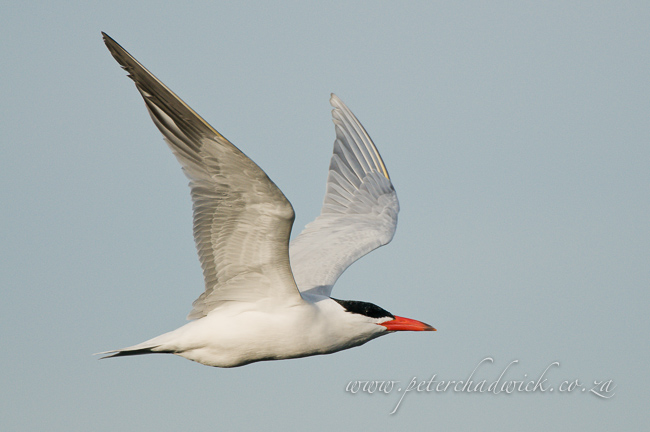 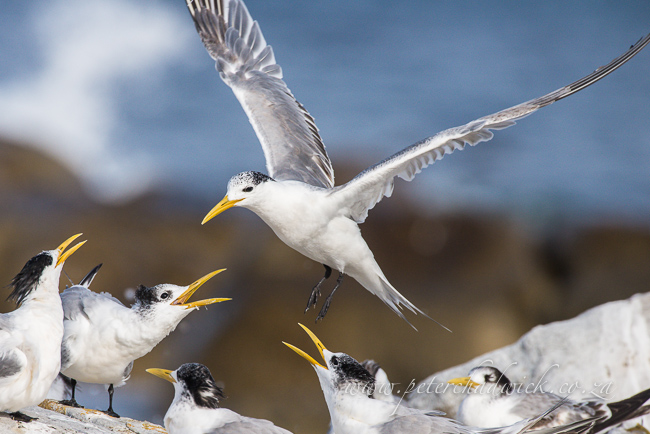 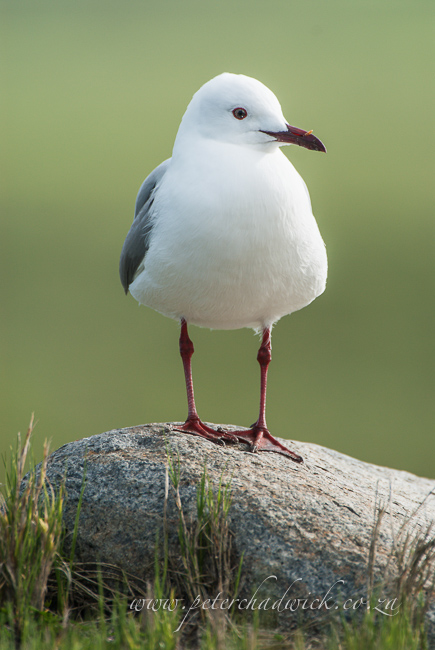 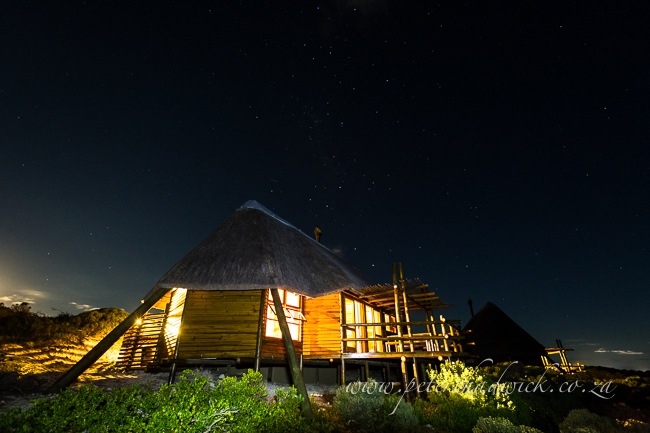 Early the next morning, the alarm clock of bird calls got us out of our comfortable beds and a cup of coffee on the deck allowed us to watch Cape Bulbuls, Cape Robin-Chats, a pair of Cape Grassbirds, Speckled Mousebirds, a Grey-Backed Cisticola and a family of Cape Spurfowls in the dune vegetation. Pandemonium errupted when a Small Grey Mongoose decided to show itself and the birds immediately went into mobbing mode with the spurfowl leading a charge against the surprised mongoose who quickly disapeared again into the thicket. 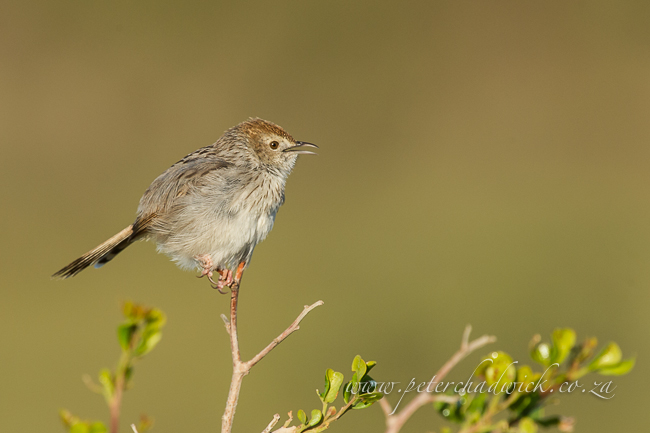 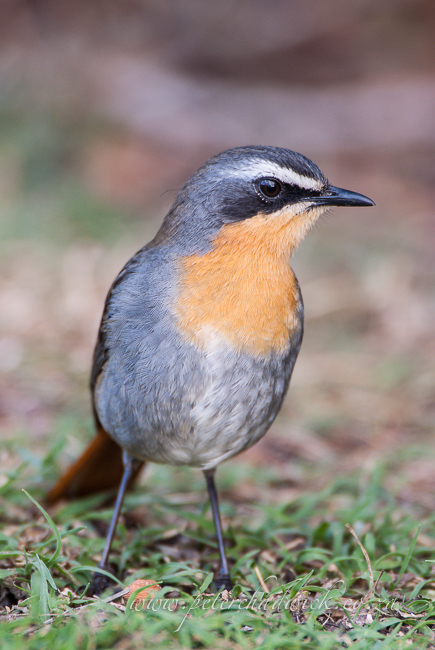 Driving out to explore the rest of the Park, we drove through farmland where Red-Capped Larks, Pied Starlings, Southern Red Bishops, African Pipits, Yellow Canaries, Large-Billed Larks and endemic Agulahs Long-Billed Larks all made use of the fence posts to warm themselves in the early sunlight and also proclaim their territories through repeated singing. At Renosterkop, the silence was only interspersed with wind rustling through the tall grasses and through the leaves of knarled Milkwood trees. Cape Robin-Chats and Sombre Greenbuls called from deep within the Milkwood trees and high above an African Fish Eagle called out along its journey between the wetlands of Soetendaals Vlei. Malachite Sunbirds, Cape White-eyes and Bully Canaries fed amongst the orange Leonotis flowers. 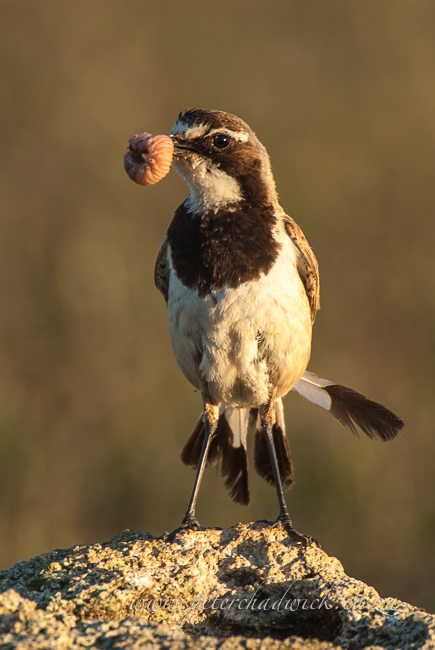 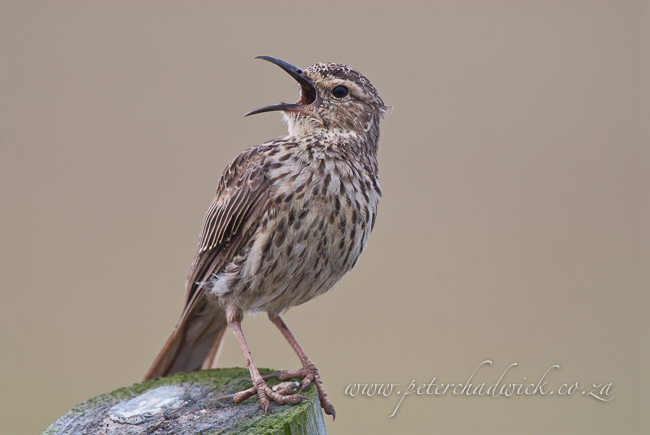 The drive between Renosterkop and Bergplaas took us through herds of beef cattle, flocks of sheep with new born lambs and herds of nervous Springbok. Denham’s Bustards were also common but extremely shy amongst more relaxed flocks of feeding Sacred Ibis and Black-Headed Herons. At Bergplaas the vehicle track took us up through spectacular fynbos where countless flowers were in full bloom from proteas through to erica’s, mimetes, cone bushes and vygies. It was extremely hard to believe that a devestating fire had ravaged this now beautiful landscape only a few years previously. Cape Sugarbird, Nedicky, Orange-Breasted Sunbirds, Lesser Double-Sunbirds, Cape Buntings and Cape Weavers all now fed amongst the floral delight as Rock Agamas sat on the highest points of boulders and spider-hunting wasps buzzed backwards and forwards. In the air above, a pair of Jackal Buzzards had a mid-air duel with a mobbing pair of Black-Shouldered Kites and White-Necked Ravens. 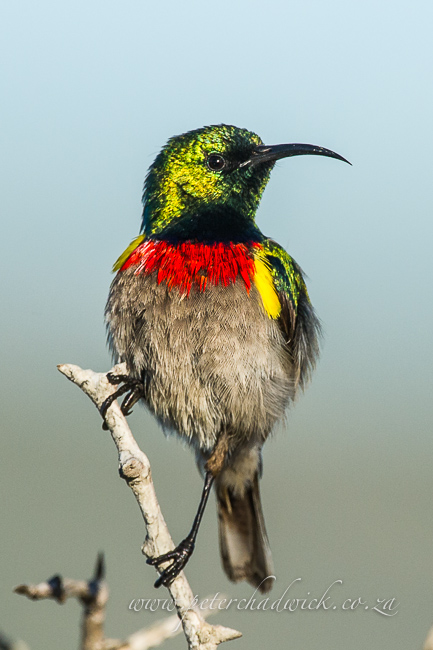 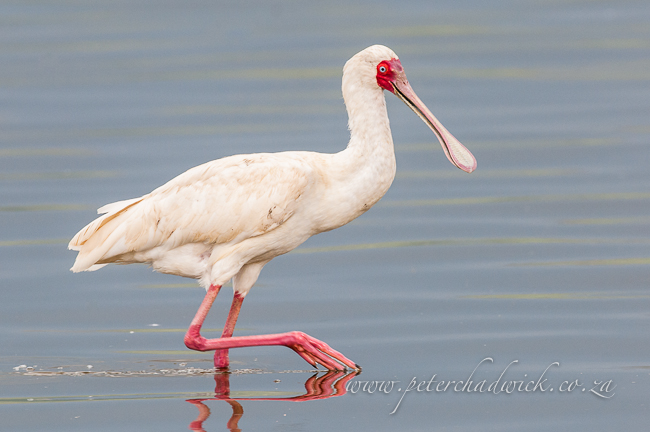 Next on our journery was the lowland areas of Rietfontein where the old farm buildings were being finalised as future visitor accomodation. A herd of Springbok fed amongst the buildings as Familiar Chats fluttered between their hooves, snatching up insects that had been disturbed by the Springbok. In the reed-bed Cape Widow males displayed to dull coloured females and Clicking Stream Frogs and Cape River Frogs basked in the sunlight. Bright pink Amaryllus flowers grew around the edges of the buildings and up on the mountain slopes Cape Sugarbirds fed amongst the protea stands.

Heading back towards the rest camp, late afternoon was now upon us without a realisation at just how quickly the day had passed by given all the excitement and diversity that we had encountered. A different route took us past sections of the Soetendaals Vlei where Red Hot Poker plants grew in the wetlands. Birds were extremely plentiful with Black-Winged Stilts, Pied Avocets, Kittlitz’s Plovers, Yellow-Billed Duck, Red-Billed and Cape Teals and African Spoonbills all being present. A real treat at one of the wetlands was a flock of well over two hundred Greater Flamingo’s that glistened pink in the late afternoon light. Reaching our chalet as dusk fell we watched a pair of Spotted Eagle-Owls fly out from a thicket to perch on one of the chalet rooves and begin their night time of hunting. A fitting end indeed to a spectacular day!

jrHidden 0/the-southern-tip-of-africa-birding.html0
Please enter the security code.
450com_contentcom_content52detail
I enjoyed that. I have to pay a good visit before my camera only develops blanks. The birdlife is truly wonderful. nLIThank you. Commented byDoug MortonJuly 28, 2013

I enjoyed that. I have to pay a good visit before my camera only develops blanks. The birdlife is truly wonderful. nLIThank you.