There is something extremely special about waking up in the heart of the Zululand bushveld just before the dawn! It is the sounds of stirring life that make this experience so memorable and as I lazed in my comfortable bed, with windows wide open, my sleep was positively disturbed by the beautifully liquid calls of a pair of White-Browed Robin-Chats that were singing in duet from a nearby thicket.

For me, there cannot be any other sound that so well depicts the dawn-chorus and excites me sufficiently enough to want to rush out to explore the new day. The Lesser Masked Weaver colony that had their nests hanging high in the crown of a large Fever Tree, soon joined the calls of the robin-chats and as the orange orb of the sun popped over the horizon, I was already up and waiting in eager anticipation of joining Bheki Jobe on a bird walk through the gardens and surrounds of the Ghost Mountain Inn that lies on the outskirts of Mkuze in Northern KwaZulu Natal. 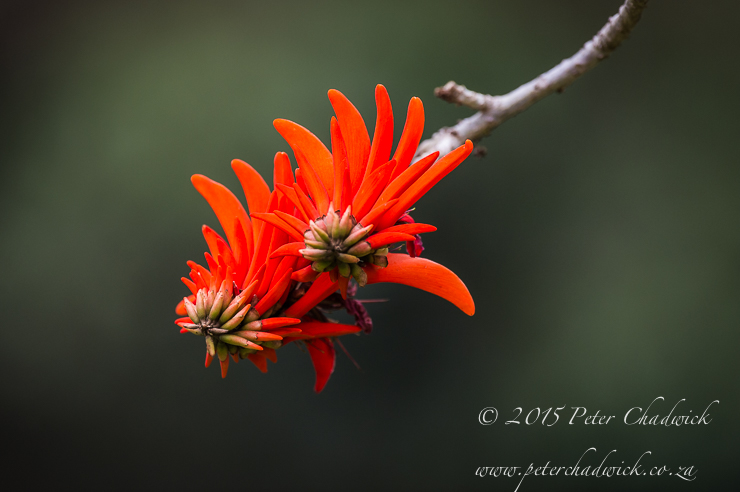 Bheki greeted me with a warm and friendly smile that was accompanied by the typical Zulu handshake of friendship and with binoculars at the ready, we headed immediately out into the expansive gardens of the lodge, where countless species of indigenous trees and shrubs lay scattered across the grounds. There were the Dichrostacus trees, with the pink and yellow “Chinese lantern flowers as well as red flowering Bauhinias, aloes, Strelitziers – commonly known as Crane Flowers, Natal Mahogany trees and the strange looking “Padda-boom” with their large low-hanging fruits.

2 of 9: Bheki Jobe on the lookout for birds in the thicket vegetation surrounding Ghost Mountain Inn.

It is however the massive fig trees that take center stage within the gardens and with ripening fruits in their crowns, they were already a hive of activity with Purple Crested Turaco’s, African Green Pigeons, Trumpeter Hornbills, Black-Collared Barbets and White-Eared Barbets clambering around in the canopy feeding. As we wandered, Bheki explained that he had been based at the Inn and guiding in Zululand since 2006 and that his area covered Mkuze, Phongola, Hluhluwe and the iSimangaliso Wetland Park. He mentioned that his special passion was leading school groups, adding “it is the youth of today that are so important in determining the future of tomorrow. Zululand is deeply etched in history and wilderness. My role as a guide is therefore important in ensuring that the children understand the significance of preserving our Zulu culture and conserving our wildlife heritage”. 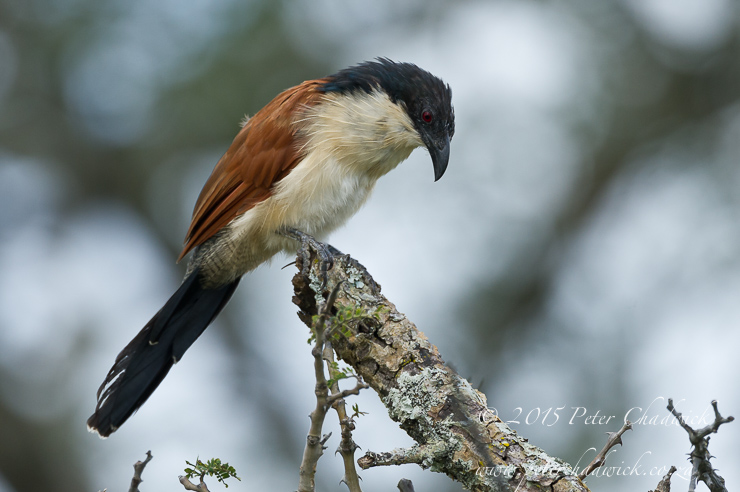 Leaving the fig trees and the grounds of the Inn behind us, we walked along a trail that led through a quite suburb of houses where Kurrichane Thrushes flicked leaves about in search of insects and Red-Capped Robin-Chats made fleeting appearances as they flew from thicket to thicket. African Firefinches, Blue Waxbills, Bronze Mannikins and Common Waxbills clung to long wavy stems of grasses that were heavily laden with seed and in the larger grassy patches African Stonechat, Red-Billed Queleas, White-winged Widowbirds, Long-tailed Widowbirds, Red-collared Widowbirds and Pin-Tailed Whydahs were also sighted.

Walking quickly past a patch where sugarcane bordered the road, we were soon dropping down into a moist wetland area where pale yellow Fever Trees towered above us. “ When European explorers first visited Zululand, they were convinced that it was the powdery bark of the Fever Trees that caused malaria” said Bheki as he rubbed his hand across the trunk of a large tree and that came away yellow and covered in fine dust. “Although we all now know that it is not the trees that cause the malaria, those explorers were not far wrong as the Fever Trees grow in the moist wetland areas where the malaria mosquito is common”.

5 of 9: A large fever tree overhangs one of the birding routes around Ghost Mountain Inn.

A flutter of movement above us drew our thoughts away from horrible blood sucking insects and back to the birds. A Pale Flycatcher had just caught a small moth that it was now swallowing and near to it, a Brown-Hooded Kingfisher sat motionless at the end of a branch. With the heat of the day already rising rapidly, butterflies, dragonflies, damselflies and numerous other insects started to emerge all around us and a highlight was watching a rather bizarre looking grasshopper laying her eggs in the damp soil. Southern Yellow-Billed Hornbills fed happily on the ground below a small troop of Vervet Monkeys that were carelessly dropping fruits and a passing birding party kept us enthralled for several minutes. Bheki quickly showed me and rattled off the names of African Paradise flycatcher, Southern Black Tit, Green Wood-Hoopoe, Fork-Tailed Drongo, Tawny-Flanked Prinia, Speckled Mousebirds, Grey-Headed Bush-Shrike and Bearded Scrub-Robins and with a little bit of extra searching we were also able to add Brubru, Black-Backed Puffback and Striped Kingfisher. 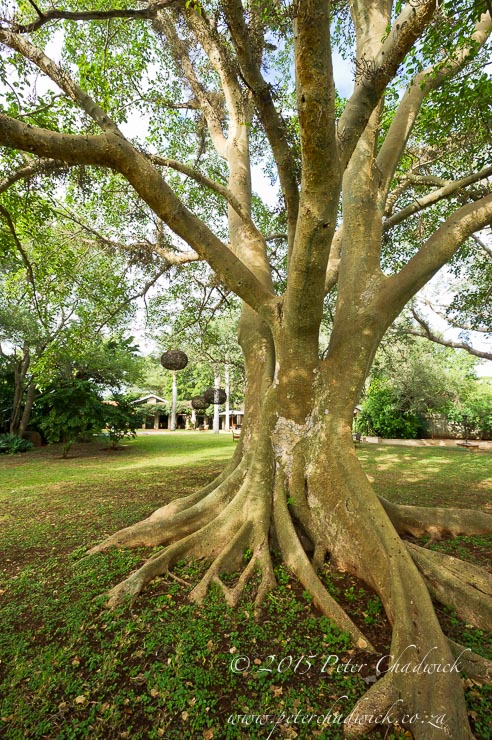 6 of 9: Large fig-trees in the Ghost Mountain Inn gardens are a hive of birding activity.

As we crossed a small causeway, Bheki pointed out a Little Sparrowhawk that was being chased by several Black-Saw-Wings and this pandemonium startled to flight a Grey Heron that had been quietly hunting on the edge of a reed-bed. Burchells Coucals called from deep within the reeds and their bubbling call added to the sound of the water flowing under the causeway, creating a feeling of peace and tranquility. “In really moist years, this is one of my favorite birding spots and I have had excellent sightings of Black Coucal and Great Reed Warbler here and as you can imagine, these caused quite a stir amongst birders and kept me busy for a long while as I led birding groups to see these elusive birds” said Bheki proudly.

Following the small rivulet back up on to the ridge, it opened out onto a large expanse of water where White-Fronted and Little Bee-Eaters swooped low, hawking the numerous midges that were emerging from the dams waters. Far off in one corner, a pair of African Fish Eagles sat perched in a dead tree and a scan with binoculars showed Little Egret, African Jacana, Reed Cormorant, White-Backed Ducks, Pied Kingfishers and a Malachite Kingfisher. Large barbell gulped air from the waters surface and in amongst the protective reed stems, schools of Tilapia sheltered. Bheki excitedly called me to show me several Pygmy Geese that were well camouflaged amongst water lilies. “These have to be one of my favorites and though I do see them elsewhere, we do not often see them here on this dam” he said.

Although not far in distance, the walk had taken us a couple of hours given all of the exciting diversity of birds and insects that we had encountered and we now found ourselves back in the grounds of the Inn again and wandering over to the coral trees with their bright red flowers. Sunbirds were in abundance, feeding on the energy rich nectar provided by the flowers. Scarlet-Chested Sunbirds, as the largest species dominated the rest and aggressively chased away Olive, Collared, White-Bellied and Marico Sunbirds. Spectacled Weavers, Speckled Mousebirds, Cape Glossy and Black-Bellied Starlings were also in attendance and high in the crown of one of the trees, a Black-Headed Oriole began to call together with a much rougher sounding Crested Barbet.

As a closing and fitting end to our amazing walk, Bheki and I found the White-Browed Robin-Chats that had awoken me earlier that morning and were now bathing and splashing in a shallow birdbath. Birding in Zululand and at the Ghost Mountain Inn is indeed something special! Season and weather: Summer months can be extremely hot and humid and afternoon thundershowers can be expected. Winter weather is more pleasant with cool temperatures and more stable weather patterns.

Habitats: The large garden and grounds around the hotel contain numerous indigenous trees and plants that have attracted over 420 bird species. A large lake lies on the edge of the hotel and indigenous Zululand bushveld is found along the bird walking routes.

Accommodation & Activities: A variety of accommodation options are available and vary from the standard room through to the private suite. All rooms are air-conditioned with private patios. A swimming pool, tennis court, dinning area and small curio shop are available. Activities include game drives to Pongola, Mkhuze and Hluhluwe Game Reserves as well as cultural and scenic safaris and bird watching walks.

Contact Information: Tel: 035 5731025 Email: This email address is being protected from spambots. You need JavaScript enabled to view it. Web: www.ghostmountaininn.co.za

Closest Town
Mkhuze
Getting There
Ghost Mountain Inn is situated in the town of Mkuze and just off the N2 highway. After turning off the N2, pass through the town to the T-Junction and turn left. After about 400m, the hotel lies on the right hand side. It lies 300kms north of Durban and 500km south east of Johannesburg. Signage in Mkuze town leads to the Inn.