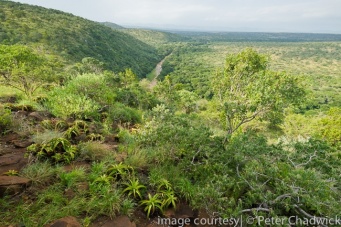 Lush, waist-high green- grassed hillsides dotted with acacia trees and shrubs drape the landscape of the Zululand Rhino Reserve and it is hard to believe that this area was heavily grazed cattle ranches in the not so distant past.

In 2004, 17 visionary landowners dropped their internal fences to create the “Big Five” reserve that is home to 70 mammal species and a large diversity of birdlife. The reserve has obviously been well managed since that time given the quality of the veld and the healthy glistening herds of Impala, Burchelles Zebra, Nyala, Blue Wildebeest and Giraffe.

The Zululand Rhino Reserve is also part of the WWF Black Rhino Range Expansion Project and is also home to other endangered species. A number of luxury lodges are scattered throughout the reserve and knowledgeable guides lead morning and afternoon game drives as well as guided walks.

Best Time to Photograph
Morning and afternoon guided game drives are provided and this coincides both with the best photographic lighting as well as the most active periods of the day for the variety of animals and birds that can be encountered on the reserve.
Type of Photography
Best Time of Year
Throughout the year
Photographic Tips
Given that space is often limited on game drive vehicles, where other guests may also be present, the use of a monopod for stabilizing the camera is a must. Speak to your guide before departure and request to sit either next to or directly behind the driver. This will allow you to constantly communicate your photographic needs to him/her. Apart from the game drives, there are usually bird baths at the various lodges and these can be excellent for bird photography through the middle of the day as birds come down to drink and bathe.
Recommended Gear
With limited space available on game drive vehicles, I would suggest taking a 24 – 70mm zoom lens for landscape images, a 70 – 200 mm zoom lens for relaxed game species and a large telephoto lens for bird photography. A monopod, bean bag and tripod are all necessary items of equipment

Season and Weather
Summer months can be extremely hot and humid and afternoon thundershowers can be expected. Winter weather is more pleasant with cool temperatures and more stable weather patterns.
Habitats
Other Activities