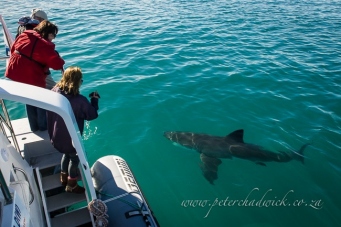 Crystal clear warm tropical waters filled with teaming life and color. Healthy coral reefs frequented by high paying scuba divers is what we first conjure up when we think of eco-tourism around our Marine Protected Areas (MPAs).

However, when we consider the huge diversity and location of our MPAs, this then is not always a viable proposition and with many communities and governments calling for MPAs to provide tourism benefit, we need to consider other options. 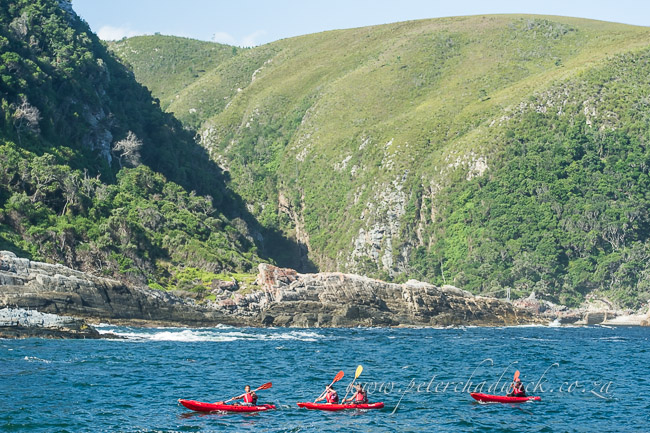 1 of 10. Kayaking at Storms River Mouth in Tsitsikamma MPA.

With conservation being at the lower end of receiving governmental funding, more and more pressure is being placed on MPAs to start generating their own incomes. Tourism is often seen as the “golden egg” that will allow this. However, is increasing the number of people undertaking a variety of activities (both consumptive and non-consumptive) within a MPA necessarily the best option and will this not place further pressures on already stressed ecosystems that were proclaimed to protect what few intact and healthy areas remain? We need to think carefully about opening a floodgate of activities within our MPAs. 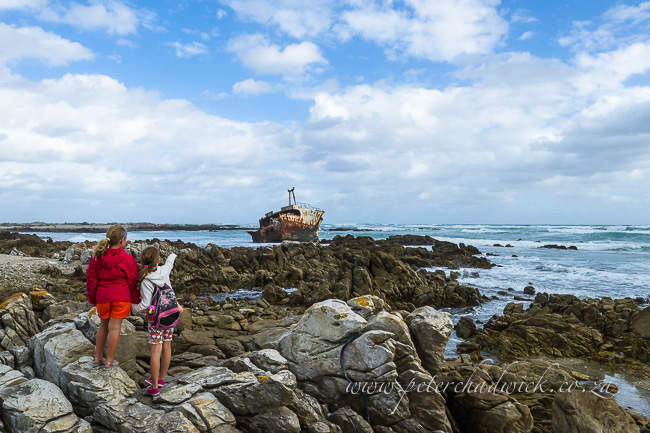 2 of 10. The Ship Wreck trail at Agulhas National Park.

Should MPAs be expected to generate tourism income or do their other benefits to fisheries and ecosystem functioning  suitably justify their existence? These are the questions as conservationists and managers that we should constantly be asking ourselves. Sadly, where we are often not good communicators and salespersons to the outside world, we get pushed into a corner and loose the delicate balance of allowing tourism while still ensuring protection. As a result, we increase human use and in particular the number of paying tourists to our MPAs. 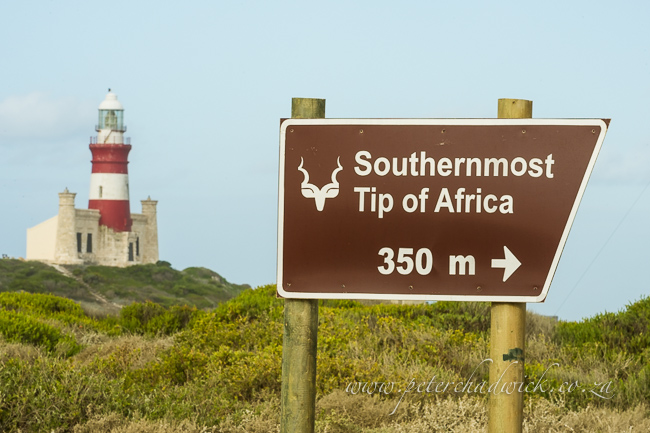 3 of 10. The Southern most tip of Africa lies within Agulhas National Park.

There is also the misperception that many of the so-called non-consumptive uses, such as scuba-diving, kite-surfing, marine mammal watching etc. have no negative impact on the environment and yet, there is increasing evidence that if these activities are uncontrolled and unsupervised they can be very destructive through their disturbance values. A prime example of this is the recently published article in National Geographic magazine (April, 2013) where the Florida manatee has become so popular with tourists that authorities now have to seriously limit numbers of visitors due to the level of disturbance by these visitors to the manatees. At the end of the day, it is all about balance and ensuring that the original objectives for which an MPA was proclaimed are not compromised. We need to have good scientific-based evidence of the value that our tourism can play and also understand the impacts of this tourism on the environment. 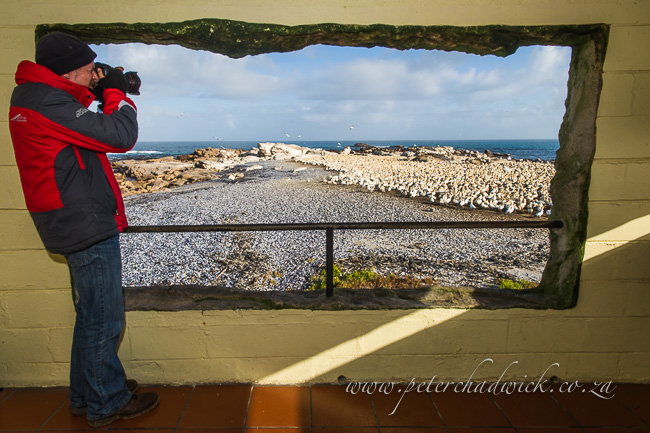 4 of 10. Visitors are able to photograph Cape Gannets at their breeding colony at Bird Island in Lamberts Bay.

On the other hand, sustainable and non-consumptive tourism does play an extremely important role in providing socio-economic opportunities and is often the better option to consumptive use. In 2006, WWF-SA, commissioned a study within the three MPAs that lie within Garden Route region A focus was given to the Tsitsikamma National Park in South Africa that was under threat of being re-opened to fishing due to political pressure. The Tsitsikamma National Park is South Africa’s oldest marine protected area and is a priceless national asset, having enjoyed total protection since 1964. It is the marine equivalent of the Kruger National Park and is a major tourist draw card. 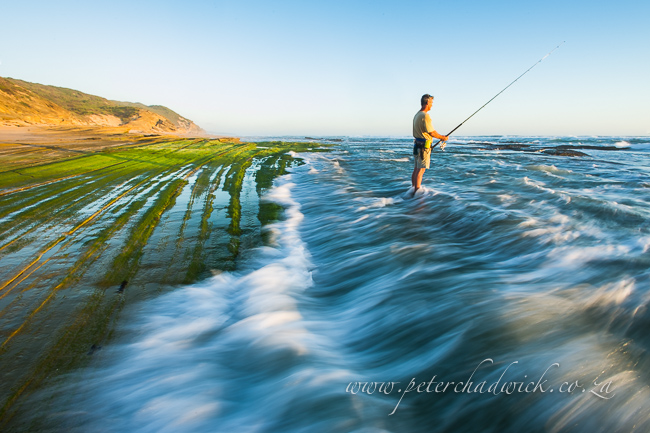 5 of 10. Recreational fishing is possible in many of South Africa's MPAs but needs to be responsibly managed.

The report was called for to better understand the socio-economic value of these MPAs and the economic implications of changes in protection. This study estimated that the total economic value of the MPAs in the garden route was R421 million (US$ 46million). Most importantly, however, the study estimated that opening of parts of Tsitsikamma will result in an overall nett economic loss of R31 million (US$3.39 million). Based on interviews in the park, it is estimated that relaxation of protection will result in a 16% decrease in visitation, or a direct economic loss of R4,7 million (US$ 510 000) per annum. Conversely the value of fish extracted from these previously closed areas was only likely to yield a once off value of R4 million (US$ 440 000), before fish stocks are degraded to the same levels as outside the park. These benefits would also be extremely short lived, and it is estimated that the natural capital built up in these MPAs since 1964 would be fished down in approximately 33 fishing days. 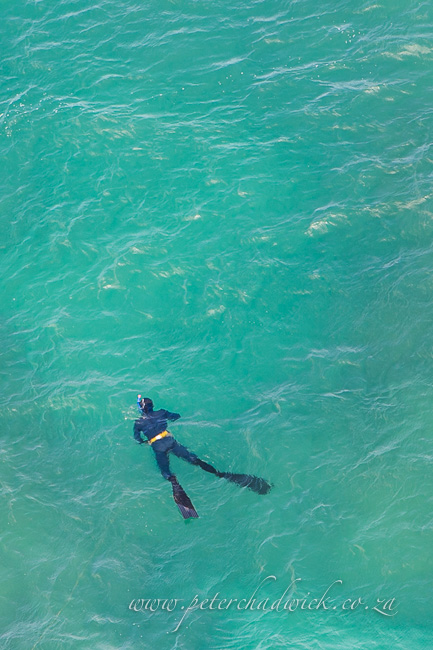 6 of 10. Spearfishing is one of the consumptive marine recreational activities and unless properly managed can cause negative impacts on biodiversity functioning.

In a similar study undertaken in 2008 in the Kogelberg along the southern Cape Coast of South Africa, the recreational expenditure attributed to the marine environment by land-based visitors was estimated to be in the range of R191 to 235 million (US$ 20.9 – 25.7 million) per annum. Boat-based whale-watching in the area is worth an additional R1.39 million (US$ 150 000). These are huge numbers that are important drivers of the local economy and clearly show the value of not opening these critical biodiversity hotspots to fishing practices, but rather following sustainable tourism practices. 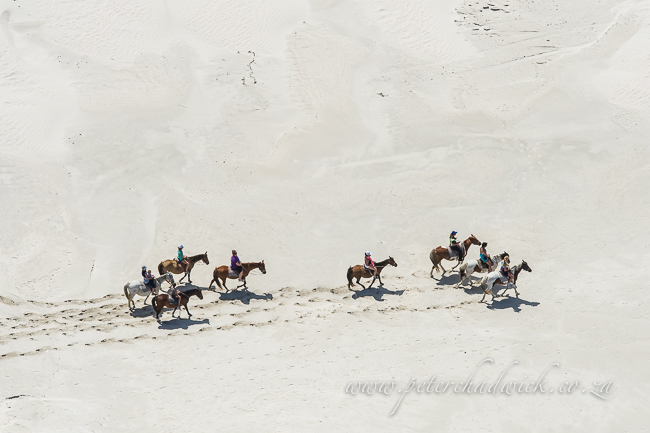 7 of 10. A group of riders partaking in horse riding along a beach front.

To further promote non-consumptive tourism and to try and encourage job creation within South African MPAs, a marine guides training course was developed by WWF-SA and the Field Guides Association of South Africa in 2010. Since inception of the training, over 120 persons have been trained and many are now working within MPAs where they lead tourists on guided marine trails. Dalfrenzo Laing, is one such example and who despite having a university exemption was only able to find employment as a petrol-pump attendant with little opportunity for the future. He was one of the first to have successfully completed the training course and has been employed at the De Hoop MPA since that time. Not only has tourism created long-term and well paying employment for Dalfrenzo, but also importantly, he has become an incredible ambassador for MPAs. He leads on average 2500 – 3500 persons on these guided trails per annum, educating them on the importance of our MPAs and why they need to be conserved. 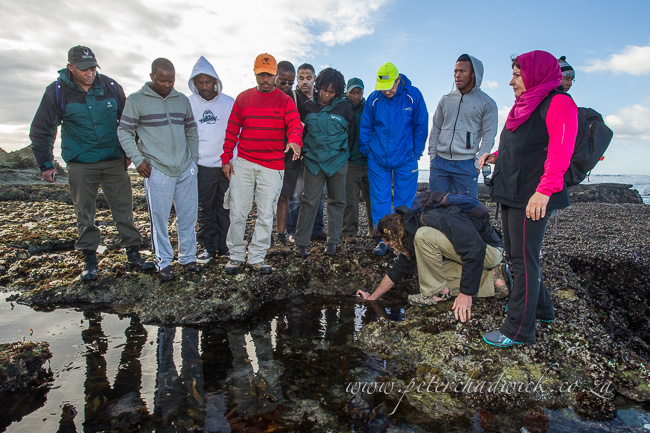 8 of 10. Dalfrenzo Laing leads a marine guided walk within the De Hoop MPA.

Given the very isolated location of a number of South African MPAs, popular three to five day hiking trails have been developed along the coastline. These trails follow breathtaking beautiful coastlines where dolphins, whales and otters play in the surf-line. Their isolated nature is vital in terms of finding our sense of place and allowing for relaxing from our stressful lives. They also provide critical work opportunities through trail maintenance, transportation and the cleaning of the facilities for neighboring communities who are often impoverished and seldom have other employment opportunities. 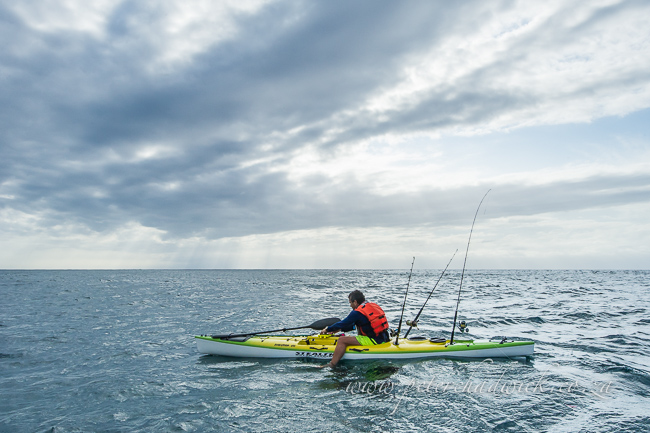 9 of 10. Fishing from a sea kayak is becoming increasingly popular in the vicinity of Aliwal Shoal MPA.

The above are just a few examples of the value that MPAs can play in socio-economic development but for tourism to ultimately succeed within our MPAs we need to be creative and think beyond just the norm of perceived activities. More importantly we need to ensure that any such activities are truly sustainable and are managed in such a way that we do not just “chase the money”. We must safeguard that ecological integrity is maintained and that any visitor also carries home with them the message of the value of these critical areas that need support and protection. Lastly, we must enable the funds that are generated to benefit the very communities who live adjacent to these critical life and ecosystem support services and have often had to compromise other rights for the proclamation of the MPA. 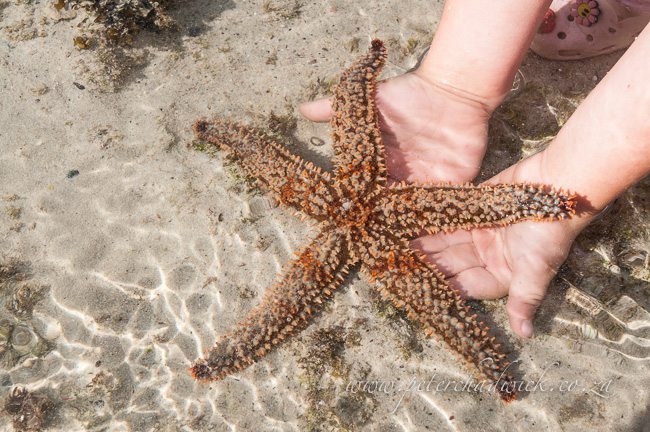 10 of 10. MPAs play a crucial role in educating the youth about biodiversity.