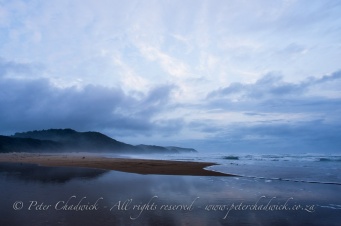 With a mixture of coastal forest, coastal grasslands, numerous estuaries and a rugged coastline, Dwesa-Cwebe Nature Reserve creates the feeling of being deep within the wilderness.

Crocodiles may be found basking on the banks of the estuaries and Cape buffalo, Burchells Zebra and Red Hartebeest roam the grasslands. The reserve is a haven for birdlife and also has an extremely high diversity of insects and in particular butterflies that can be seen in the forest canopy and eco-tones.

Hiking trails meander through the lush forests and along the coastline where magnificent views can be had with dolphins frolicking in the waves below and whales cruising along the coast. Walks along the coastline cross numerous estuaries that are teaming with birdlife and the large black slabs of rocks that are exposed at low tide host African Black Oystercatcher and other migrant waders. At dawn and dusk swarms of Ghost Crabs and Ploughshare snails scour the beach in search of detritus washed in by the waves.

Best Time to Photograph
Landscape and coastal photography is best undertaken at either dawn or dusk, while the birds and insects become most active from about an hour after sunrise through to midday.
Type of Photography
Best Time of Year
Throughout the year
Photographic Tips
At low tide, large slabs of symmetrical black rock become exposed and if the low tide is timed to coincide with dusk or dawn, excellent opportunities exist for landscape photography. The small estuary that lies close to the campsite is another excellent landscape photographic location. Butterflies and forest birds may be photographed within the canopy from the decks of the cleverly placed chalets that overlook the dense forest. Hiking towards the Cwebe section of the park also provides a plethora of photographic opportunities with vast vistas of the coastline possible from the high points.
Recommended Gear
Dwesa-Cwebe Nature Reserve provides a wide range of photographic opportunities that maximize the full range of lenses right from wide-angled through to large telephoto lenses. Stable tripods and cable releases for landscape photography is suggested.

Season and Weather
The area has a relatively high rainfall within the summer season and temperatures are warm and pleasant. The winters are mild.
Habitats
Other Activities
Guide/s Available
Vuyani Jamce
Contact Number (cell)
0825393283 or 0713443986
Featured Guide/s
Vuyani Jamce

Closest Town
Idutya
Getting There
Dwesa is best reached via the N2 through the town of Idutya in the Eastern Cape. The turn off is well signposted. Note that the access roads are gravel and can be extremely rough so always allow for extra time to cover the distance.
Address
Dwesa-Cwebe Nature Reserve
Tweet