In search of the Atlantic Puffin - Photographing Fowlsheugh Hot 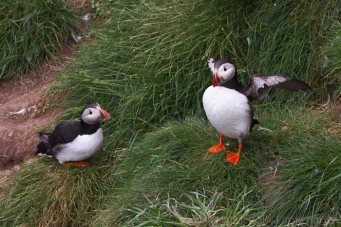 Fowlsheugh is a small coastal nature reserve, adjacent to the hamlet of Crawton in Kincardineshare, northeast Scotland. It is a good spot for coastal bird photography, specially the Atlantic Puffin.

Departing south from Aberdeen along the A90, we stopped at the small town of Stonehaven. It was from here that we planned to make our way to the bird colony at Fowlsheugh after a hearty late lunch and a pint of ale.

Taking the A90 south out of Stonehaven, exit east on the A95 towards Crawton along the narrow, windy road until you reach a small parking area and the access point for Fowelsheugh.

My growing eagerness was driven by the chance that there may be breeding puffins on the cliffs. Fowlsheugh is a coastal nature reserve, managed by the Royal Society for the Protection of Birds. It is an IBA (important bird area) and protects the nesting seabirds from egg collectors and bird hunters. It is a relatively small stretch of sea cliff, but the actual surface area is quite large due to the height of the cliffs. The breeding season is short and sea cliffs come alive with activity in Spring through to Summer, with the cliffs supporting one of the highest densities of breeding seabirds in Europe. 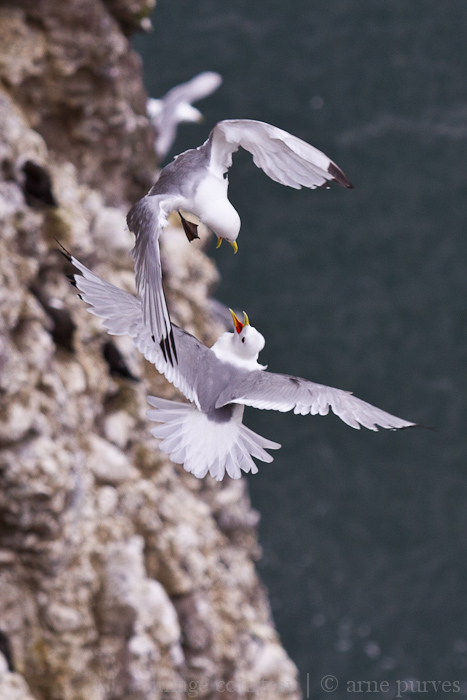 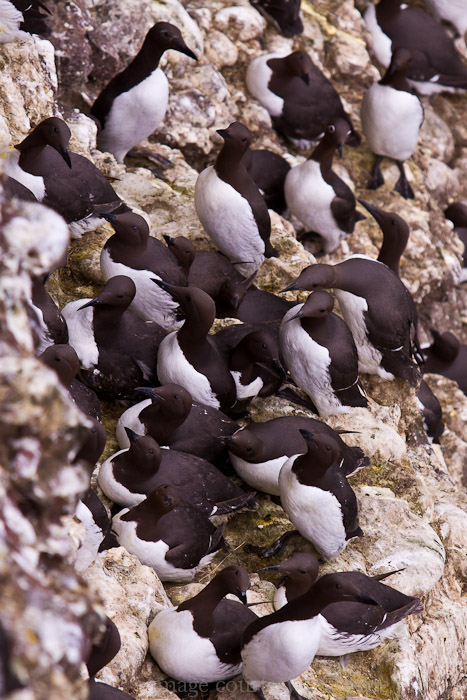 The sea cliffs are really impressive, but are extremely dangerous places to walk around, especially when you are trying to photographs birds in flight. The edge is grassed and slippery and is often undercut. The geology is a mix of old red sandstone, conglomerate (locally know as pudding stone) and irregular volcanic extrusions. There are numerous sea caves at the base of the cliffs, formed by wave action.

Our first evening was really just a recce as I did not know what to expect. The sky was a rather grey and the light was rather dull, but had moments when the natural diffuse light made for some really good photography, especially for nesting/stationary birds. 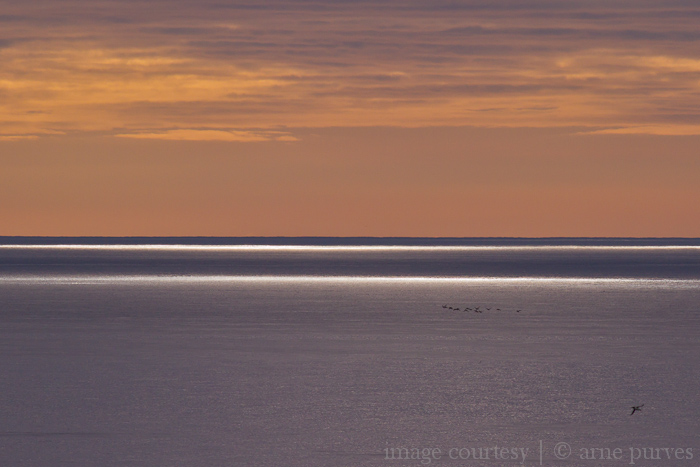 There is a network of paths that makes its way along the top of the cliffs. On the southern end of the path (close to the Puffins) there is a small hide/interpretation centre. Interpretation boards are dotted along the pathway and provide some insight into the bird species, ecology and history of the area.

I slowly made my way along the edge of the cliffs, looking for subjects to photograph, the choice was impressive. Razorbills, herring gulls, fulmars, grey backed gulls and guillemots were in abundance. The cliffs were a hive of activity with the razorbills, screaming past as the gulls and fulmars glided gracefully along the cliffs. The usual cacophony that one associates with seabird colonies was ever present, which really adds to the excitement.

On our first evening we only ventured half way down the path as it was late and the evening light was starting to get really dull and grey.

We returned to Fowlsheugh the following day, but this time I had a plan and we headed straight to the end of the path, to the point were we had been assured there were nesting Puffins. After a brief look in at the hide we slowly made our way along the cliff edge keeping an eye out for the elusive little birds, but twenty minutes of scouring the cliffs did not produce anything. Rather despondently I sat down and started to photograph the fulmars and herring gulls in flight.

My despondency was suddenly shattered with my fiance, Cecile, pointing at the cliff face shouting, “look, look, the orange feet”. I strained my eyes along the cliff, but for the life of me could not see what she was looking at. “The red feet, looook”. And there they were, a pair of unmistakably orange feet, which as you might expect belonged to an Atlantic Puffin. My excitement almost had me scrambling over the edge to get a closer look, but the 70m drop brought me sharply back to reality. 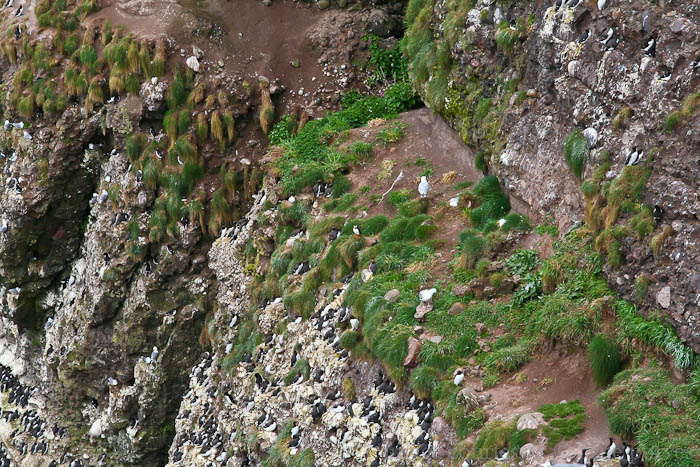 I managed to work my way to a point were I had a clear view of the puffin, as I sat down to get some images, another puffin made its way out of the burrow they were using as a nesting site. Although the birds were a fair distance away I managed to get some great shots of the little birds interacting as they prepared to take off for their feeding grounds in the North Sea. 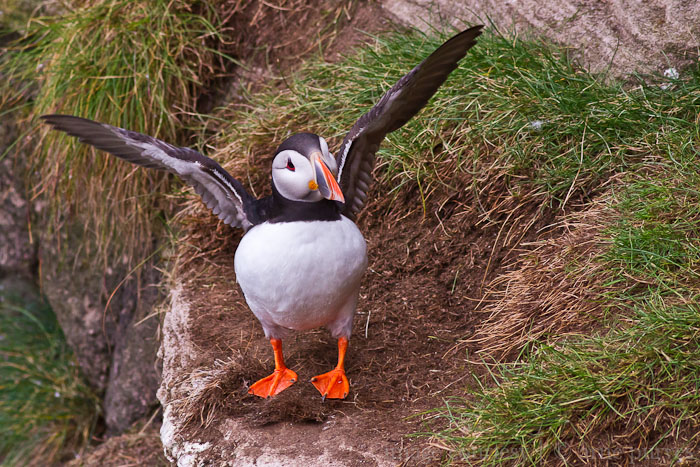 Over the next hour another two pairs of puffins made an appearance. I managed to shoot a bit of shaky video, but with a monopod, this was not too successful with a 400mm lens. The low light and really dull background meant that there were to be no awesome images but, you make the best of every opportunity and enjoy the experience for what it is, regardless. 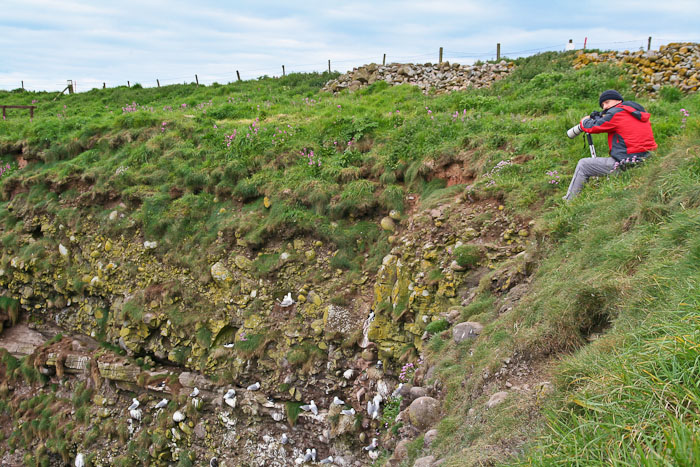 As the skies darkened, to that late evening northern hemisphere grey, it was time to head home. Although I still had that iconic shot of a puffin with sand eels in its beak, in my mind, the sea cliffs are not the spot for that image. I was content with just seeing the puffins in their natural habitat and all the other sea bird species that were new to me.

On our walk back I was struck by the beauty of the cliff tops, with all the spring flowers out in full bloom. I had been so focused on the walk in I had hardly noticed. We strolled back along the grassy path, stopping to capture the colors and some of the nesting birds, a pair of hairs, and the farm fields in full bloom. 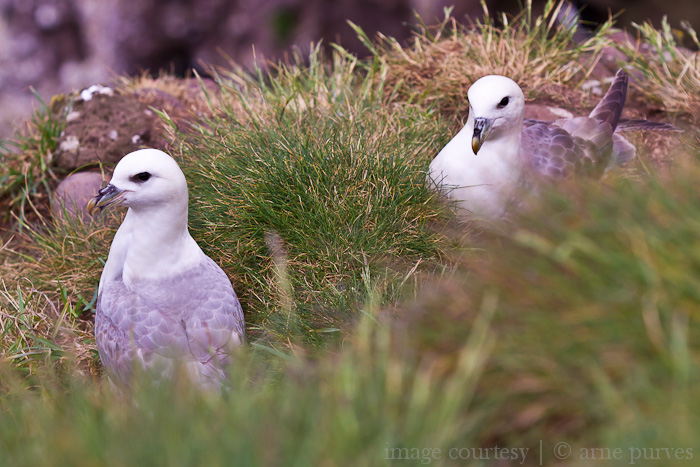