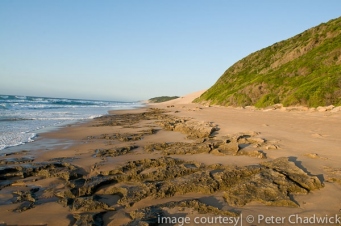 Lying in the far northern reaches of Zululand , Kosi Bay is best known for its series of fish traps that lies across the network of freshwater lakes.

Kozi Bay comprising of a network of freshwater lakes and lush vegetation is a birdwatchers paradise with many of the countries special birds being found in this area. Nearby, Bhanga Nek is also the prime location for nesting Loggerhead and Leatherback Turtles during the summer months.

Best Time to Photograph
Birds are best photographed early in the mornings, while turtles can only be photographed with a guide at night. Fish traps are best photographed during the late afternoons.
Type of Photography
Best Time of Year
Photographic Tips
Before photographing any people or the fish traps, always obtain permission first. Local communities are very sensitive to the photographing of the fish traps. Booking a turtle tour with local registered guides is the only way to be able to photograph the nesting turtles. Bird watching is often good from a small boat traveling along the edges of the lakes.
Recommended Gear
A full range of lenses is needed for this extremely diverse area. Good covers for camera gear are needed along the coastline and beaches at night. Small head torches are also useful for turtle tours.

Season and Weather
Summer months are extremely hot and humid and afternoon thundershowers can be expected. Note that this is a malaria area. Winter weather is more pleasant with cool temperatures and more stable weather patterns.
Habitats
Other Activities

Closest Town
Emanguzi
Getting There
Kozi Bay lies in the far northern reaches of the iSimangaliso Wetland Park en-route to the Ponta do Ouro border post with Mozambique.
Address
Kozi Bay