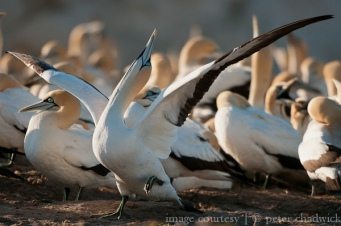 Best known for Bird Island and the thousands of breeding Cape Cormorant, Lamberts Bay offers a variety of photographic opportunities.

Lamberts Bay is home to several seabird species and even at night, you can easily hear the flocks of calling gannets, gulls and terns that are on nearby Bird Island.  Driving into the harbor at sunrise, huge flocks in their thousands, of Hartlaubs Gulls and Swift, Sandwich, Common and Arctic Terns adorn the factory roves or wheel in the skies above constantly calling.

Cape Cormorants build their nests on platforms that have been provided for them or nest amongst the masts of abandoned fishing vessels. After having paid your entrance fee to the CapeNature official and having wandered across the harbor breakwater to the island you will be entranced for several hours watching the Cape Gannet colony. Cape Gannets wheel into land and then shuffle forward to their designated spaces, where they settle and preen.

Any deviation from the set path results in angry pecks from territory holding birds. It is worth scanning out to sea to watch the flocks of Cape Cormorant heading off to the feeding grounds with the hope of a lucky sighting of the endemic Heavisides Dolphin which is regularly seen in the area.

Best Time to Photograph
It is worth making two separate trips to the island that cover both the early morning and late evening as activities and angles of light differ greatly.
Type of Photography
Best Time of Year
Throughout the year
Photographic Tips
Photographing of the Cape Gannets usually is undertaken from within the viewing building. Although the upper deck is good for photographing the gannets in flight it is best to set up a tripod just on the outside of the building and next to the small wall. This allows you to get at eye-level with the gannets.
Recommended Gear
With this being a coastal destination always be prepared for sudden weather changes and always carry protective clothing. A range of lenses is needed from wide-angled through to full telephoto lenses to maximize the opportunities at this site

Season and Weather
The climate is Mediterranean with warm summers and mild winters. Wind is present throughout the year with rain falling mainly in the winter months. Always be prepared for sudden changes in the weather. The summers are the dry and dusty months, whilst winter is the time when the fynbos is lush, green and in flower. The best months to visit are April and September.
Habitats
Other Activities

Closest Town
Lamberts Bay
Getting There
Lamberts Bay is best reached off the N7 that runs north of Cape Town. Follow the R364 and the signs to Lamberts Bay. The entrance to the harbor is easily found once in the town.
Address
Lamberts Bay: Bird Island