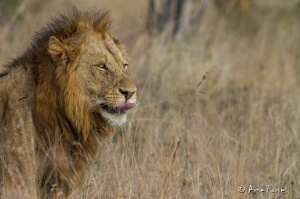 A male lion looks on as other members of the pride interact, in the Kruger National Park.

Lions are classified as vulnerable (likely to become Endangered unless the circumstances threatening its survival and reproduction improve) on the IUCN red list. Habitat loss and conflict with humans are two main causes. Lions in Africa are dependent on nature reserves and National Parks for their long term survival.

A mostly nocturnal animal, lions hunt predominantly at night and spend their days sleeping and lazing about. A Male lions mane is a defining characteristic and makes the animal appear much larger and more intimidating to potential foes and other male lions competing for dominance in the pride.