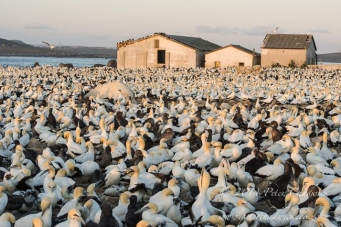 South Africa’s suite of offshore islands that lie between Lamberts Bay and Algoa Bay are largely unknown beyond their managing authorities. They are critical biodiversity hotspots protecting unique habitats and species and are in many cases the last breeding strongholds for our endemic seabirds that include the African Penguin, Cape Gannet, cormorants and terns.

The islands that include Dassen, Malgas, Robben, Deyer, and Bird were first known to the western world over 500 years ago when Bartholomew Diaz rounded our shores in 1487. Since that time, the islands became regular stopovers for ships companies that plundered them for the seals and seabirds as a ready source of meat and eggs for ships larders and as fuel for ships boilers. 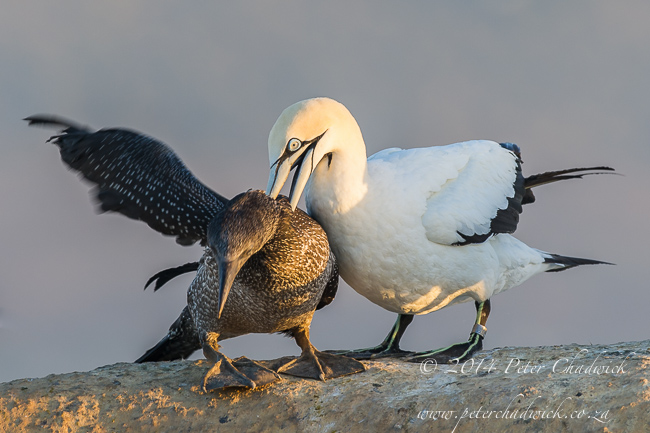 1 of 14. An adult Cape Gannet attacks a recently fledged juvenile, pecking it on the back of the neck and forcing it into submission.

In the 1840s, the “white gold” rush then rocketed the islands to instant fame as thousands sped to them to get a share at scrapping the islands clean of the meter high piles of guano. This guano was collected and transformed into nutrient rich agricultural fertiliser, leaving bare rock behind and destroying suitable seabird nesting sites that had been built up over thousands of years. 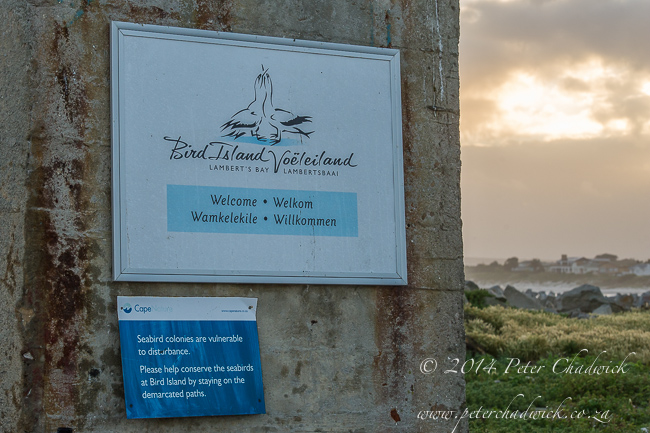 2 of 14. The signage at Bird island in Lamberts Bay where visitors may view the Cape Gannet colony together with other seabird species.

At the beginning of the 20th century an additional threat emerged with the wholesale collection of penguin eggs for food. The eggs were initially collected as a cheap source of protein for the poor and over time, as the eggs became increasingly scarce, they became a luxury food item. Luckily today, any form of disturbance is illegal and access to the islands is strictly controlled.  Sadly, the threats still continue for the islands seabirds with the over-harvesting of their main food source by fishing fleets. It is estimated that the Cape Gannet population is decreasing at one percent per annum and the African Penguin may be extinct by 2025. 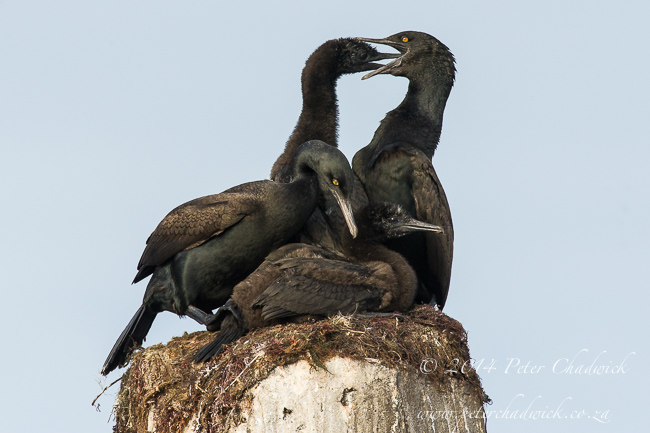 3 of 14. A Bank Cormorant feeds a ravenous chick as the rest of the brood balances precariously on the limited nesting space.

With South Africa also lying on one of the worlds major shipping lanes, the seabirds are also at high risk to oil pollution. In June 2000, the bulk oil carrier MV Treasure ran aground between Robben and Dassen Islands. 20 000 African Penguins were oiled in this disaster and of these between 6000 and 6500 died. 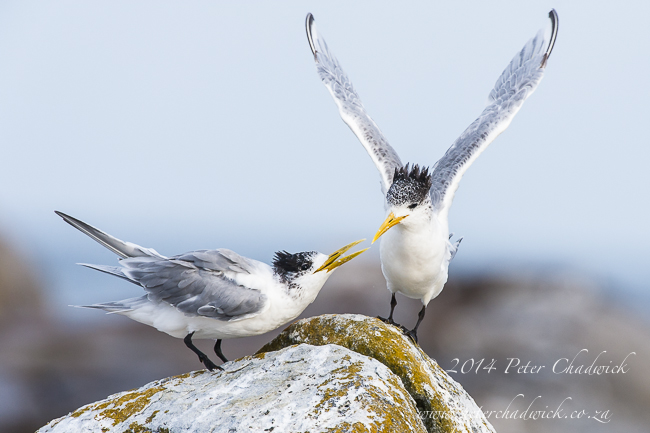 4 of 14. Swift Terns greet one another on landing on a small rocky outcrop.

My first introduction to the islands was through a visit to Bird Island at Lamberts Bay on our west coast. The island is connected to the mainland by a short harbour wall and attracts thousands of visitors to the well-designed viewing centre that overlooks the 10 000 strong colony. During the 2005/2006 breeding season, more than 200 adult gannets were predated upon by Cape Fur Seals and as a result, the rest of the colony abandoned their nesting attempts. Through conservation intervention, the responsible seals were removed and decoy gannets were placed on the breeding site to try and attract the gannets back. Fortunately in 2007 the colony returned to breed successfully. 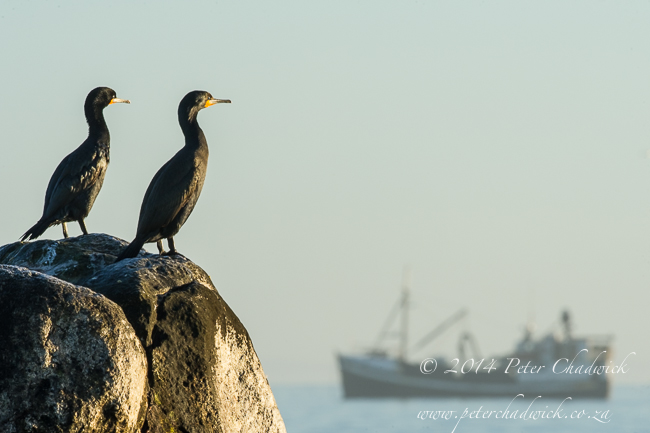 5 of 14. Cape Gannets roost on Dassen Island as a purse-sein trawler passes in the distance.

With the iconic shape of Table Mountain lying in the distance, Dassen Island is home to amongst others rabbits, angulate tortoises, fresh water pans, shipwrecks and breeding colonies of Great White Pelicans. A mass of buildings greets one’s arrival on the island and it turns out many of these were built to house the staff of the guano harvesters and egg collectors. The rabbits were imported from England as an additional food source and now thrive in large numbers. Less certain, is how the tortoises arrived but in lean times they have learnt to feed on the droppings of the rabbits. A low concrete wall encircles the island, apparently originally being built to exclude African Penguins from gaining access to the centre of the island. Today the buildings house the resident conservation personnel and visiting researchers. One of the rooms is set-aside as a “Seabird Sick Bay” and is a constant reminder that all of the islands are prepared to deal with any disaster or disease outbreak that threatens the seabirds. 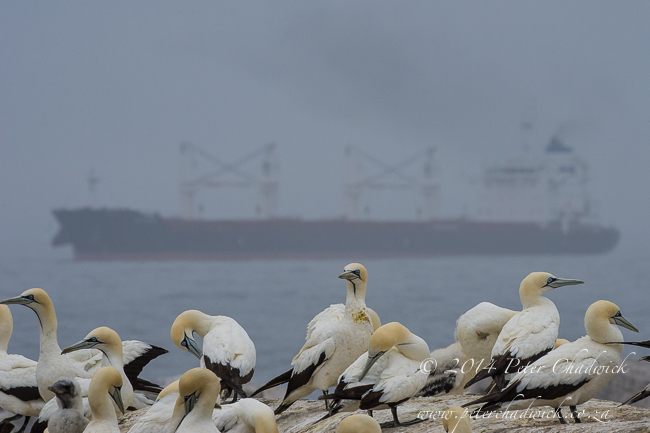 6 of 14. An iron-ore tanker passes close by to Malgas Island where thousands of Cape Gannets and other seabirds breed.

The Great White Pelicans that breed on Dassen Island are one of only two breeding colonies in South Africa and the adult birds cover vast distances each day to feed. Unfortunately, they have also taken to flying to Malgas Island to scoop up and swallow unattended Cape Gannet chicks and this has caused managing authorities to employ “pelican chasers” during the main breeding season of the gannets. 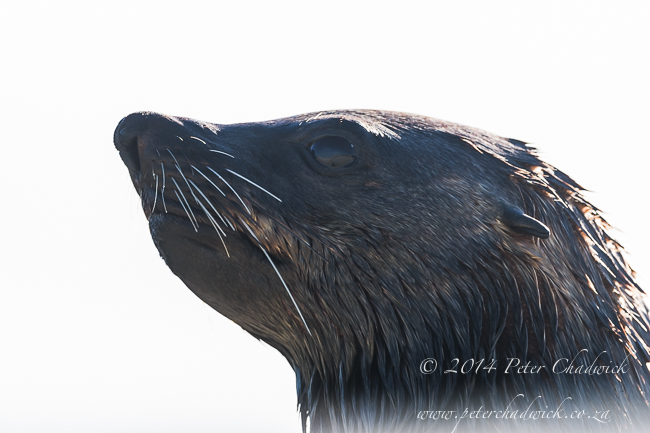 Malgas Island, lies next to the main shipping lanes accessing Saldanha Port and this places the island at risk from a shipping disaster. Interestingly one or two Australian Gannets roost amongst the breeding Cape Gannets and hybrid gannets from the two species have also been recorded. It is however believed that the hybrid birds come from a small colony where Cape and Australian Gannets interbreed in the southern ocean. Some of the densest populations of African Black Oystercatchers are found here and this is good news for a species that is slowly recovering from the threat of extinction through conservation effort. 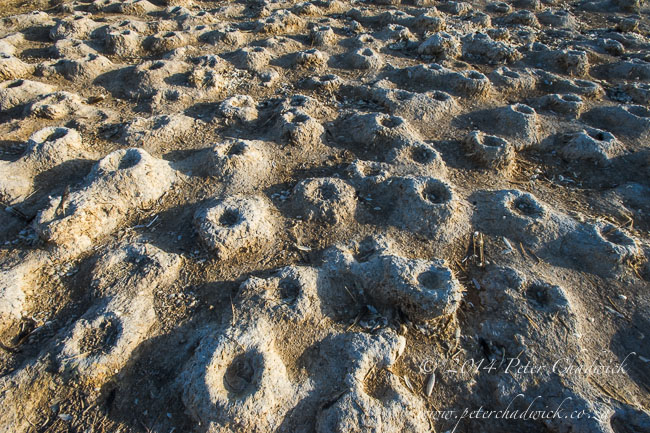 8 of 14. Empty Cape Gannets are a harsh reminder that the majority of our seabird colonies are declining rapidly with Cape Gannets, Bank Cormorants and African Penguins all risking extinction.

With a well-known history as a leper colony and of course political prison, Robben Island is also an extremely important breeding island for African Penguins that are now carefully monitored and researched. Researchers are able to track individual penguins through the unique spot patterns on the front of each bird. Some of the birds have also been fitted with small satellite transmitters so as to determine their main feeding grounds. This information will help identify critical areas that need to be protected from commercial fishing and enable the penguins to catch enough food. 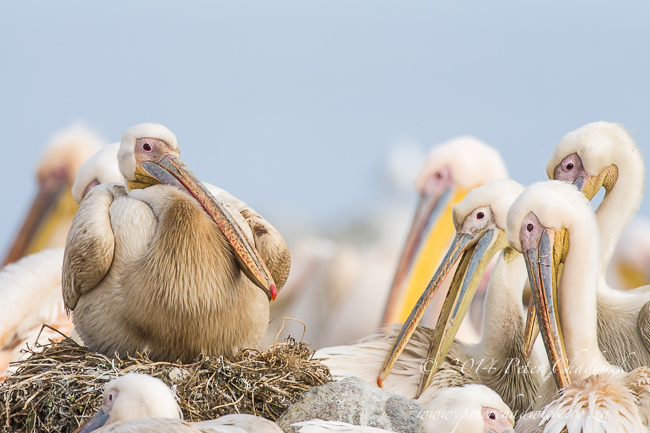 Swift Terns and Hartlaub’s Gulls also breed in large colonies and Robben Island is one of the last strongholds for the endemic Bank Cormorant. It is thought that the crash of the population of Bank Cormorants has been as a result of over-harvesting of West Coast Rock Lobster, which is the birds main prey. Sadly, there is rampant poaching of abalone in waters around Robben Island and the island shoreline is littered with piles of abalone shells. Despite intensive efforts by authorities, the poaching continues and is a major threat around several of the islands. 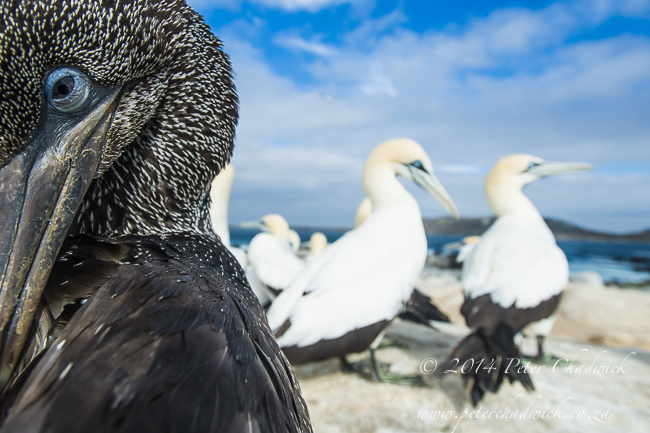 10 of 14. A juvenile Cape Gannet preens as adult gannets stand nearby.

At Deyer Island, The Deyer Island Conservation Trust supports conservation and in particular the African Penguin. The Trust has initiated garnering public support by asking them to purchase penguin-nesting boxes. Carefully manufactured, the nest boxes are placed on the island and have now increased the number of nesting sites for the penguins considerably. African Penguin conservation is taken extremely seriously on the island and when it appears that chicks have been abandoned or are malnourished they are carefully collected and with the support of SANCOB are fed and cared for until they are old enough to be released. 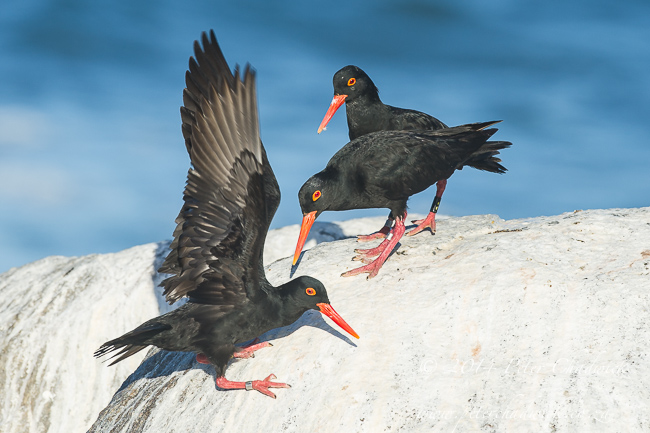 11 of 14. African Black Oystercatchers squabble for space on top of a large boulder.

Algoa Bay near Port Elizabeth is home to both Bird Island and St Croix. This bay is also the only area where both Cape Gannet and African Penguin numbers have been increasing and although not fully understood it is thought that this may be due to the eastward shift of the two birds main prey source. St Croix, like Malgas, lies extremely close to the shipping lanes to Coega Harbour and there is also talk about setting up sea cages for mariculture nearby. 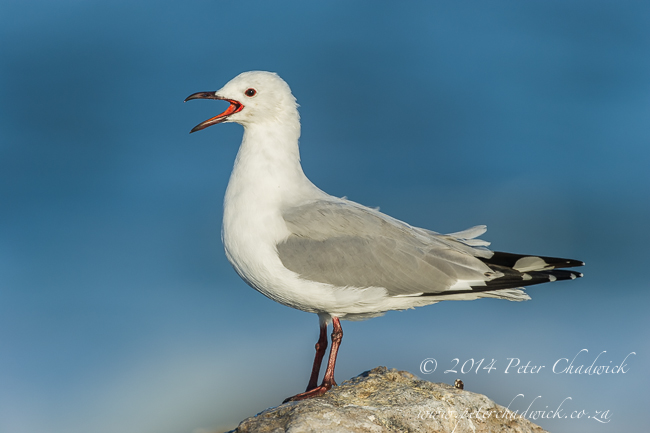 12 of 14. The endemic Hartlaubs Gull calling at its roost site on Malgas Island.

Bird Island is home to the world’s largest Cape Gannet colony as well as a small breeding colony of Rosette Terns and African Penguins. Over the last few years, a lone Wedge-Tailed Shearwater that is more at home in the Pacific has made the island its roosting site during the summer months. During my most recent visit last summer, there was a week where temperatures exceeded 40 degrees Celsius and heavy rains left pools of standing water on the flat island. This combination of factors increases the likelihood of avian malaria and avian cholera and the high temperatures also reduce the nesting success as birds are forced to abandon the nests and seek shelter. 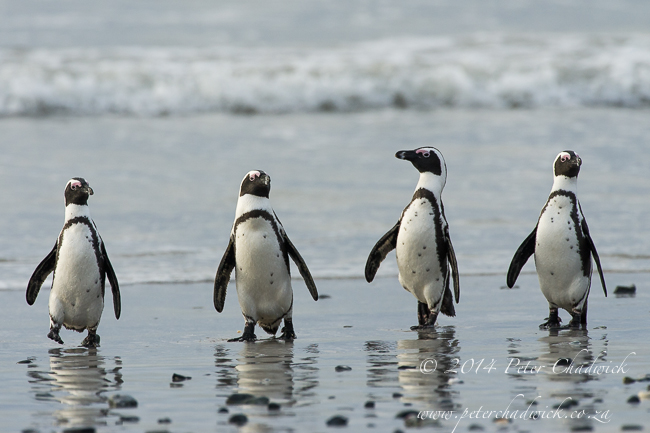 13 of 14. Four African Penguins walk up the beach on Robben Island and after spending a day at sea feeding.

With the acknowledgement of the important role that South Africa’s islands play in the protection of our dwindling seabird species, conservation authorities are working hard to ensure their protection, including them in marine protected areas and trialling fishing exclusion zones around the main seabird feeding grounds. Public and industry support is also vital to ensuring that these amazing wild places continue their important role in biodiversity and seabird conservation. 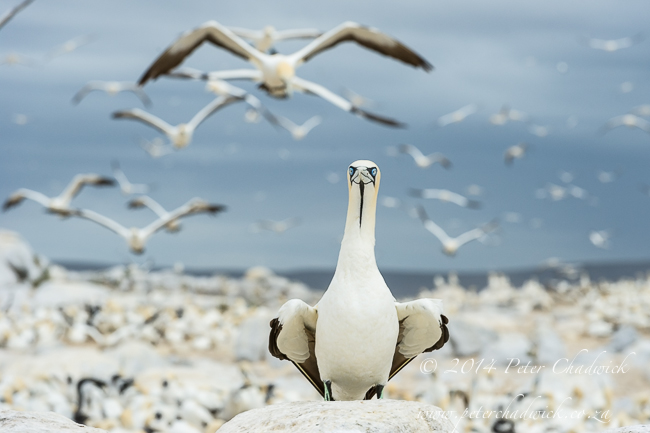 14 of 14. A Cape Gannet prepares to take to flight as a storm approaches its colony at Malgas Island.