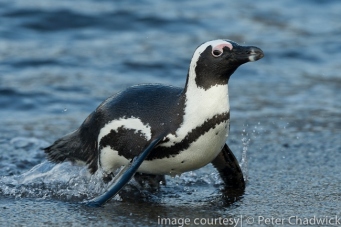 The African Penguin is the only penguin species to breed on African shores and it is largely found along the cold waters of the southwestern coastline.

Mostly breeding on the scattered offshore islands of South Africa and Namibia, there are also two mainland breeding colonies at Boulders Beach in Simonstown and at Stony Point at Bettys Bay.  Today the population stands at around 175 000 birds and populations are still sadly decreasing with the bird now been listed within the Red Data Book.

First known to the western world over 500 years ago, the African Penguin was a common species.  With the arrival of Bartholemeu Diaz in 1487, the penguin became a ready source of meat and eggs for ships larders. The carcasses were also rendered down for both fat and as fuel for ships boilers.  In the 1840s, the South African guano rush started. The seabird droppings were known as “white gold” and this was scrapped from all the breeding islands to be transformed into nutrient rich agricultural fertilizer. This stripping of the guano left bare rock behind and stripped the islands of suitable nesting sites for the penguins. It was these harvests that left the biggest negative impacts on the African Penguins. Then at the beginning of the 20th centaury, another threat developed with the wholesale collection of penguin eggs for museum collections and for food. The eggs were initially collected as a cheap source of protein for the poor and over time as the eggs became increasingly scarce they became a luxury food. 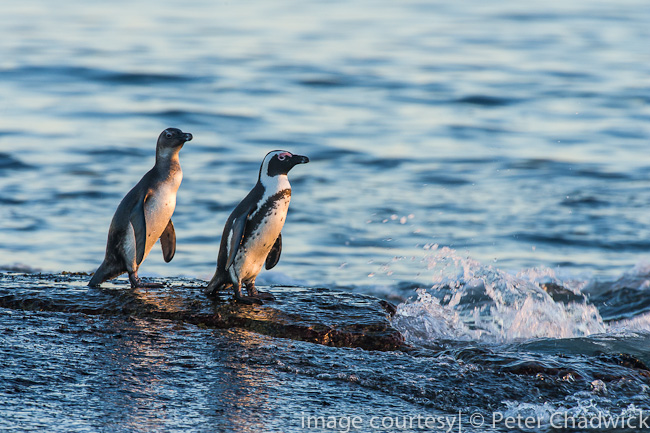 Today, egg collection and guano harvesting is illegal and the largest threats facing the penguins are the overharvesting of small pelagic fish which is their main food source. With South Africa also lying on one of the worlds major shipping lanes, the birds are also at high risk to oil pollution. In June 2000, the bulk oil carrier MV Treasure ran aground between Robben and Dassen Islands. 20 000 African Penguins were oiled in this disaster.  Intensive efforts are now thankfully underway to conserve this endemic species and conservation agencies and NGOs are working hard to halt the decline in numbers. 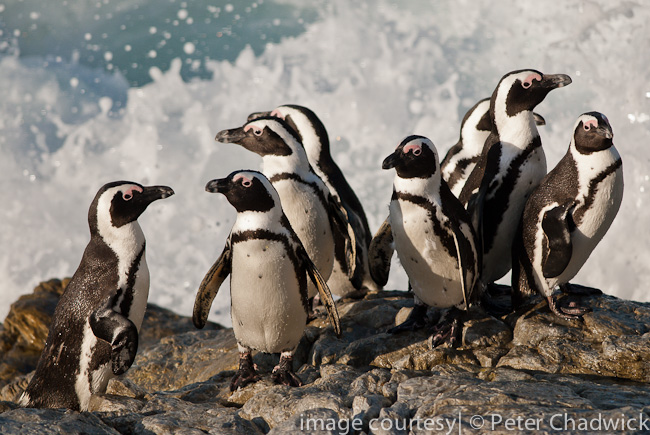 1. A small group of African Penguins rest on the rocky shoreline as waves break just behind them. 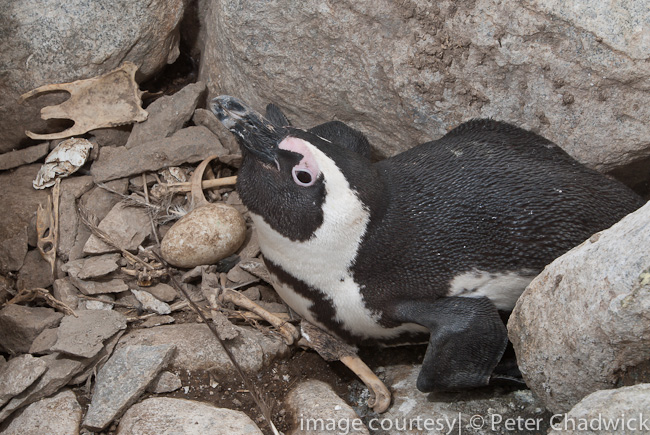 2. An African Penguin sits next to her nest. Usually one or two pale blue eggs are laid. 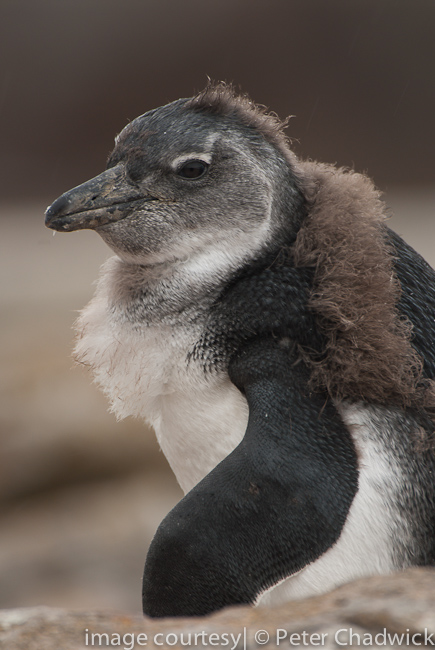 3. A juvenile penguin undergoes its final molt before leaving the nest to go off and fend for itself 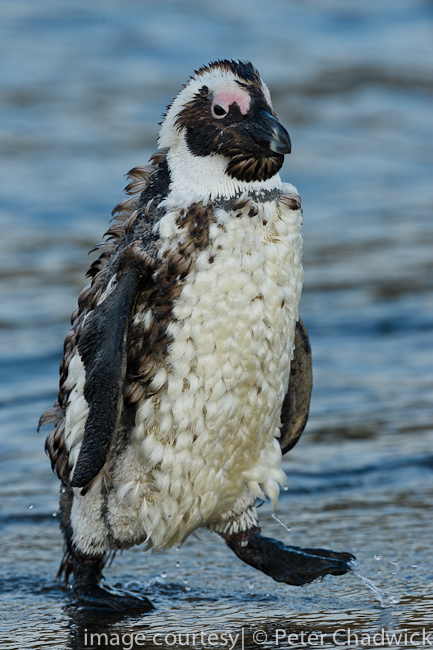 4. An adult African Penguin, with heavily ruffled feathers at the start of its molt. While molting, the birds will not go to sea of feed. 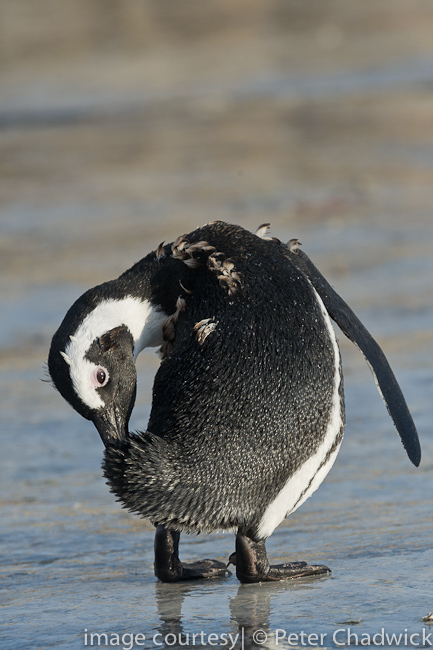 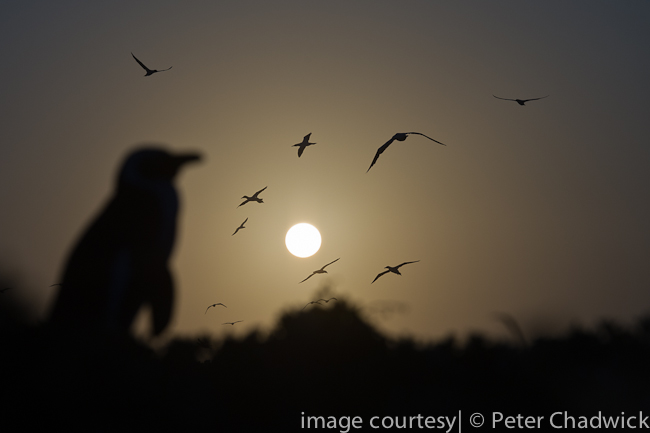 6. An African Penguin sits silhouetted against the evening sky as Cape Gannets come to roost at their breeding island. 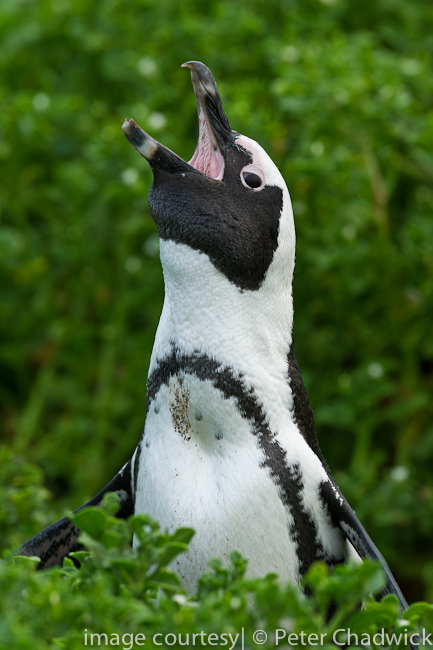 7. An African Penguin adult brays loudly at dawn from the entrance to its breeding burrow. 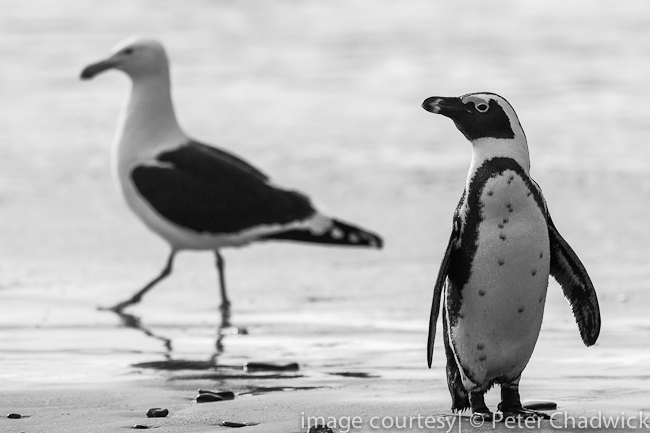 8. An African Penguin watches as a Kelp Gull wanders past along the beach front. 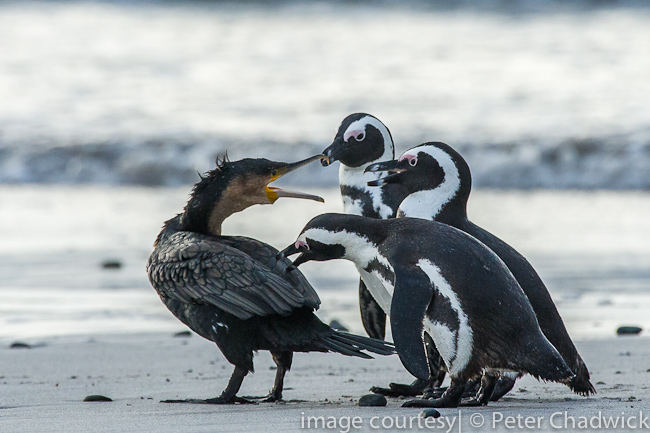 9. Three African Penguins gang up to investigate a White-Breasted Cormorant that has come onto the beach to rest. 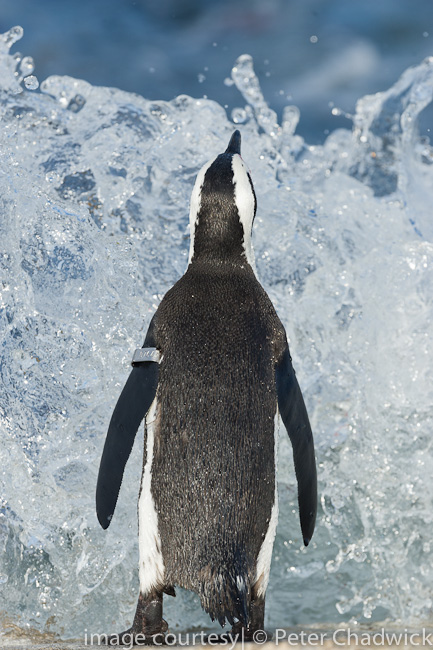 10. An African penguin with a flipper band braces itself against a wave that is breaking on the shoreline. 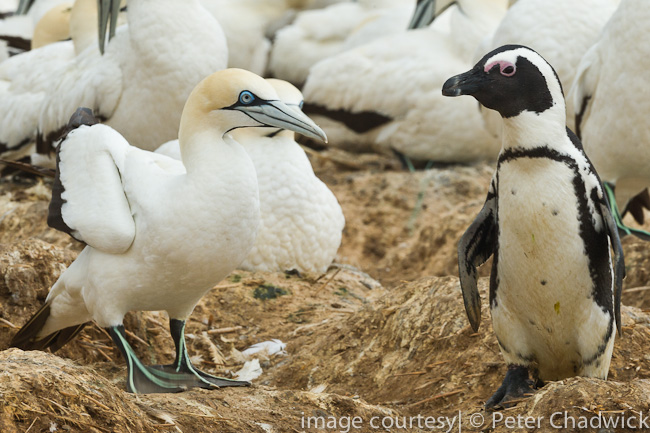 11. An African Penguin wanders past the nest of a Cape Gannet on Bird Island in Algoa Bay. 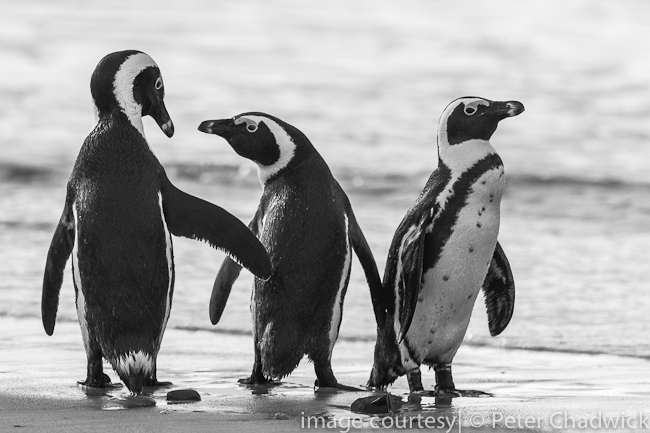 12. Two African Penguins squabble briefly after emerging from the water on Robben Island. 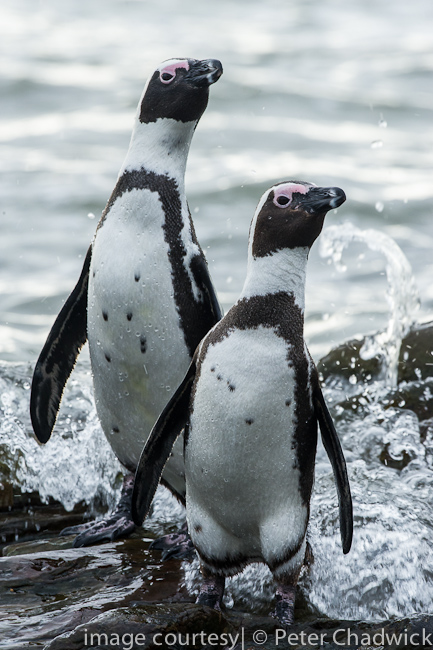 13. Two African Penguins that have just landed ashore after a days feeding look around cautiously before venturing further inland. 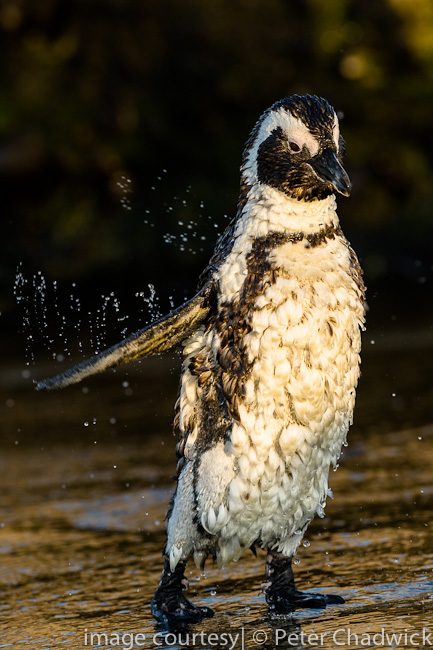 14. An African penguin shakes itself free of water as it emerges in the evening to roost at its breeding island. 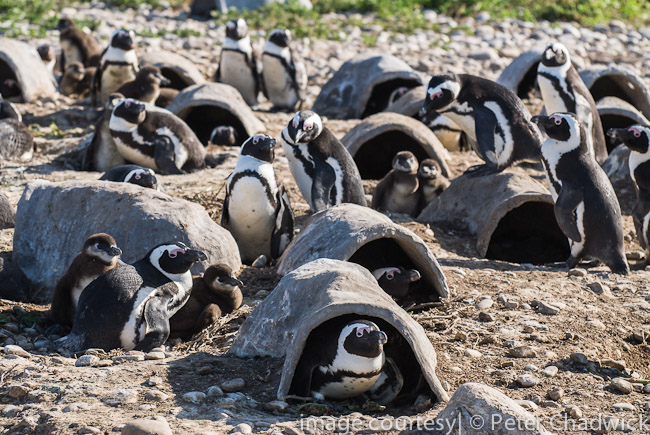 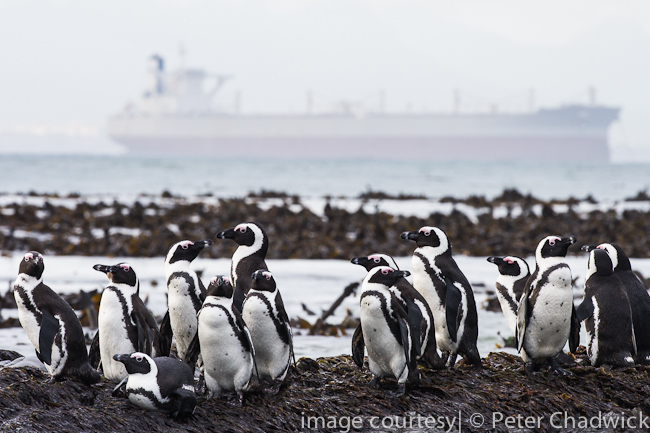 16. Large bulk tankers that pass close to the African Penguins breeding islands are a major potential threat should they wreck and dislodge their oil into the sea.

Text and Images by Wildlife and Conservation Photographer Peter Chadwick