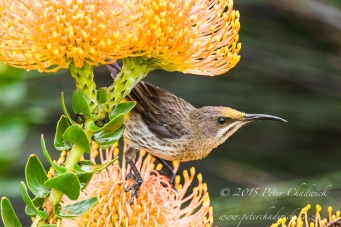 Kirstenbosch Botanical Gardens, lying at the base of the Table Mountain chain and within the suburbs of Cape Town is world-renowned for its floral displays of the fynbos of the Cape Floristic Kingdom. This incredible diversity of plant life, in turn attracts the best of the Western Cape birds, including many of the highly sought after endemics and makes it one of South Africas top birding destinations.

The mist whirled and swirled, enveloping the mountains above and only providing brief glimpses of the rugged cliffs above me, while below me the vast expanses of the Cape Flats stretched far before being contained by the Hottentots Holland Mountain range that lay about 35 kilometers distant. A gentle drizzle began to fall, but this in no way hampered the constant birding activity around me and it almost seemed to act as an additional stimulant to entice even more birds to sing and display. A sudden silencing of the birds marked the path of a Black Sparrowhawk that flew fast and determined towards a dense patch of trees on the forest edge. On its landing, a small flock of Olive Pigeons erupted from the tree tops to fly away in panic to a safer location away from the voracious raptor. All of this sent my mind into overdrive, with all of my senses lapping up the sheer mood of the place and it was extremely hard for me to believe that I was standing close to the heart of one of the countries busiest cities.

Kirstenbosch Botanical Gardens is one of Cape Towns most well known treasures and is a popular destination for any visiting tourist, both local and international and to me it is one of my favourite places to view many of the Cape Floristic Kingdoms endemic bird species. As an additional bonus and because of the constant flow of people many of the birds are fairly relaxed allowing for close approaches and great photographic opportunities. The well maintained gardens that were formally established in May 1913, provide a rich diversity of habitats from open green lawns through to stands of flowering proteas and ericas to forest patches with fast running streams in them and all of these are in turn home to their own suite of bird species.

Arriving at the entrance as the gates opened to the public, I eagerly purchased my ticket and wandered along the still quite pathways towards the protea gardens, where I hoped to find displaying Cape Sugarbirds and sunbirds.  Passing below an ancient and knarled tree, a pair of Egyptian Geese looked down at me, honking softly as I passed by. Cape Canaries sung in the high branches and in the distance a heavily flapping African Harrier Hawk flew with a pair of White-Necked Ravens constantly dive-bombing and harassing it.

3 of 11: Stunningly beautiful landscapes of the Kirstenbosch Botanical Gardens.

On the lush green lawns, small flocks of Helmeted Guineafowls ran around chasing one another and Hadedahs probed their long decurved bills deep into the soil to pull out fat wriggling earth-worms that were quickly swallowed. Olive Thrushes made short forays onto the lawns from dense shrubbery and a Cape Spurfowl clucked around her batch of what must have been just hatched chicks. On seeing me, she herded her uncooperative bevy to the base of a large protea bush where she settled, allowing the chicks to sit below her warm and protecting feathers. Long, waving grasses attracted a flock of Common Waxbills and I was delighted to also see five delicate looking Swee Waxbills feeding on the lawn nearby and with the two male birds being easily distinguished form the females by their black masks.

4 of 11: Cape Spurfowl chick hiding within its mothers feathers.

Having reached my intended first destination, I was well rewarded with proteas, pincushions and erica species in full bloom and that provided a kaleidoscope of colour from deep reds, through to oranges, yellows, pinks and purples. It was here that the Cape Sugarbirds were in abundance and male birds hovered and displayed their long flowing tails to females that were far more interested in feeding than accepting advances from flirtatious males. Explosions of metallic colour showed the male Malachite, Lesser-Double Collared and Orange-Breasted Sunbirds that darted between flowers, pausing briefly to sip at the rich nectar on tap before flashing their dazzling feathers and singing loudly from prominent perches. 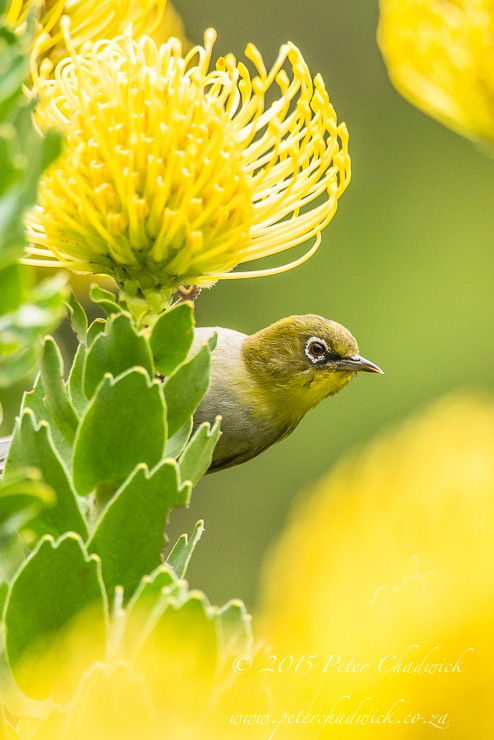 Spending nearly an hour amongst the sugarbirds and sunbirds, I was soon joined by throngs of foreign groups of tourists that snapped away with their cameras, all the while uttering appreciative oooh’s and aaah’s as their local guides spun off reams of information about the floral display before them. Leaving these eager but rather noisy groups behind me, I searched for quieter areas on the edges of the forest and was well rewarded with sightings of Cape Batis, Cape White-eye and Southern Boubou’s as they searched for insect prey amongst the leafy branches. Red-Eyed Turtle Doves emerged from the undergrowth to land on the lawns where the male birds puffed themselves up and bowed and cooed in display to the females. An added surprise for me was when a wild looking rabbit hopped out of the undergrowth and began to nibble on the short green grass. 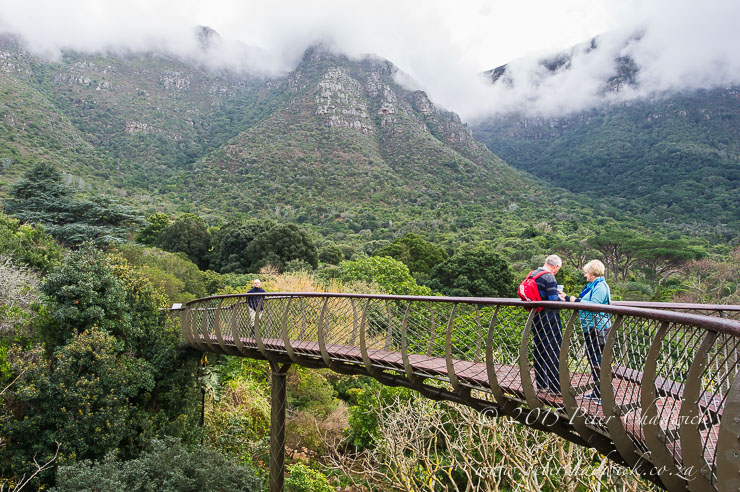 6 of 11: The Boomslang aerial boardwalk.

Scanning the skies above me with binoculars for several minutes I was well pleased to sight both African Goshawk and Rufous-Breasted Sparrowhawk as well as Black, Little and White-Rumped Swifts that wheeled and turned at speed as they fed on the aerial plankton of minute insects. A brief opening of the cloud cover along the cliff faces gave the gap for a Rock Kestrel to leave its roost and fly out over the city landscape below. Turning back from the forested slopes, I wandered downwards again to find a patch of flowering yellow and white daisies where Spotted Prinia pairs hopped through the leafy cover and small family flocks of Cape Canaries plucked at the flower petals. Cape Bulbuls and Cape Robin-Chats were a little shyer, sticking to the edges of woody shrubbery where they paused to preen and ruffle their feathers. 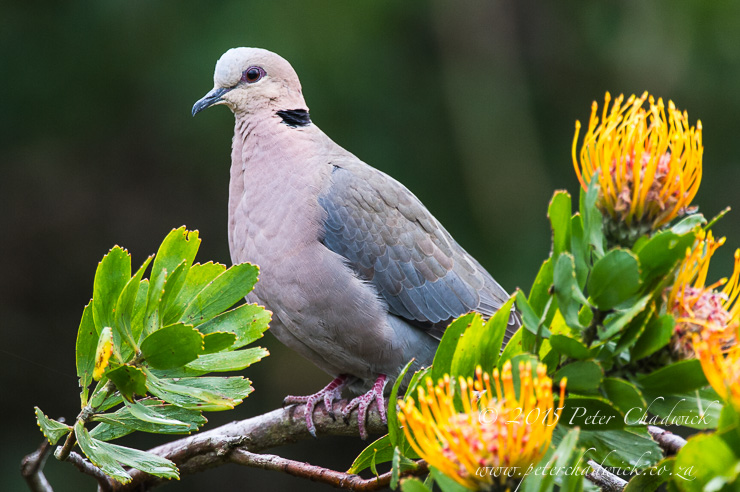 Passing the cycad gardens, I followed the signs to the newly erected aerial boardwalk that was aptly named the “Boomslang” after the manner that it sinuously wound its way through the treetop canopy and its supporting arches had been designed to replicate the ribs of the reptile.  The twists and turns along the walkways route gave different views and perspectives of the gardens and at one point I could also view the not too distant waters of False Bay that shimmered a silvery-blue in the overcast haze. Well-placed information boards provided great insight to the workings of the forest and highlighted bird species that may be encountered along its route and although I did see many birds it was only the Red-Winged Starlings that were perched high in the canopy that were a new species to my days viewing.

As I wandered slowly back towards the entrance gate and to my vehicle after an amazing number of hours bird and flower watching, I had deliberately left the one last birding highlight for last. I soon found the stony walkway that I was looking for and followed its route to the base of a large tree that grew from within a pile of granite boulders. The white splashes of droppings showed that I was to be successful in my quest and looking into the trees canopy, I soon found the camouflaged shapes of two snoozing adult Spotted Eagle-Owls. Satisfied that they were indeed there, I then changed my search to the boulders below and was thrilled to find two fluffy owl chicks peering out at me with huge yellow eyes. These owls have been breeding in the gardens for years and each year the chicks attract scores of admiring onlookers providing an additional memorable experience from these truly amazing botanical gardens.

9 of 11: Tannin-filled stream running through the gardens. 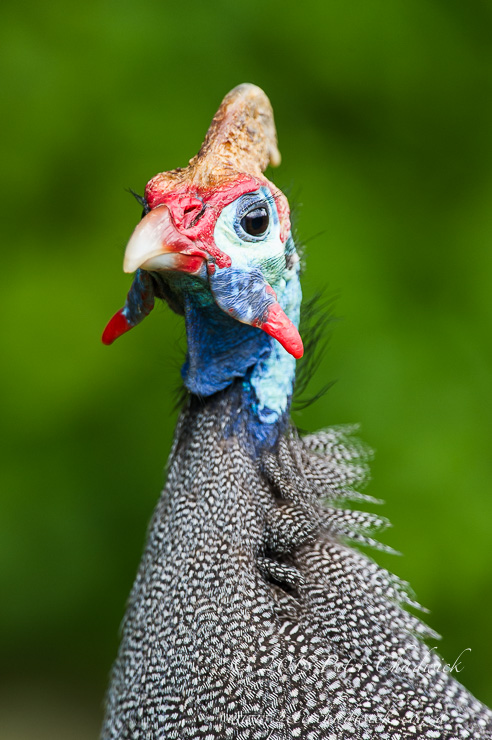 Getting There:
Kirstenbosch lies 13 km from Cape Town's city center and is well signposted on all major roads. From the city, take De Waal Drive (M3) in the direction of Muizenberg, at the Rhodes Drive (M63) traffic light intersection turn right (west/towards the mountain) and follow the signs to Kirstenbosch. 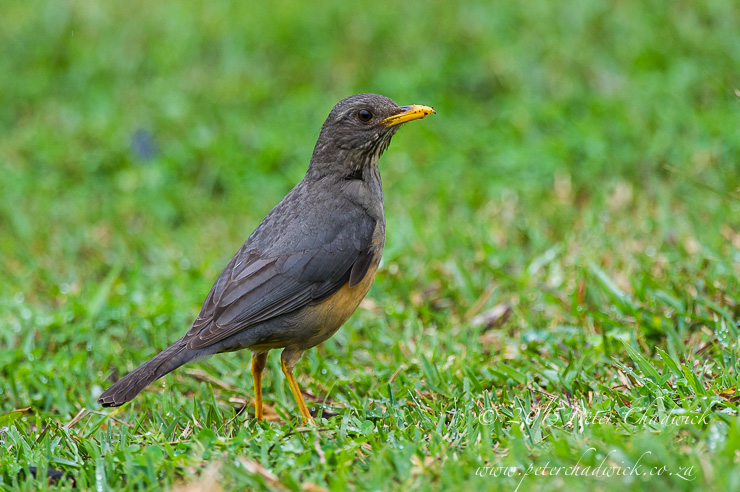