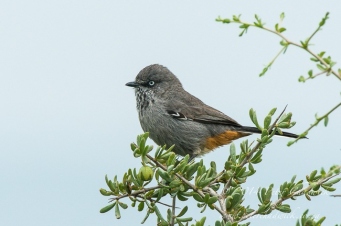 To me Lamberts Bay is the epitome of the west coast where the cold nutrient rich waters of the Atlantic drive the daily life-cycles in this partially arid yet bio-diverse landscape. Take this together with the numerous small interspaced coastal towns, each with its own endless character and you have the makings of a really great birding adventure.

My favorite west-coast birding route is to head from Cape Town along the N7 as far north as Lamberts Bay and then work southwards, following the network of roads that run parallel to the coastline and pass through a wide range of habitats.

After a leisurely trip up from Cape Town I drove into Lamberts Bay during mid-afternoon on a Friday. My timing was not great as my arrival coincided with the rolling fog bank that moved in from the sea and covered Bird Island, where I was hoping to observe the Cape Gannet colony at close range. 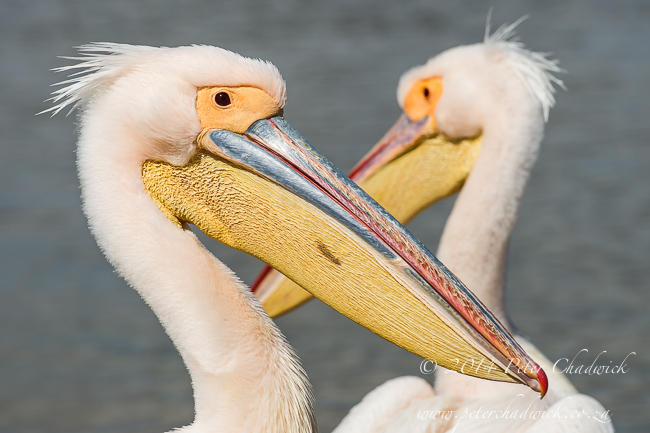 This colony recently made headlines after rogue Cape Fur Seals harassed the birds to such an extent that they abandoned the island all together for an entire season. Fortunately these seals have now moved on and with the help of a few man-made replica gannets who acted as decoys, the colony is now back in full force. Even though there were no photographic opportunities amongst the mist, it was still fantastic to watch as hundreds of returning birds wheeled and turned hard to land in just the right spot and thus avoid being attacked by irritable and noisy neighbours. 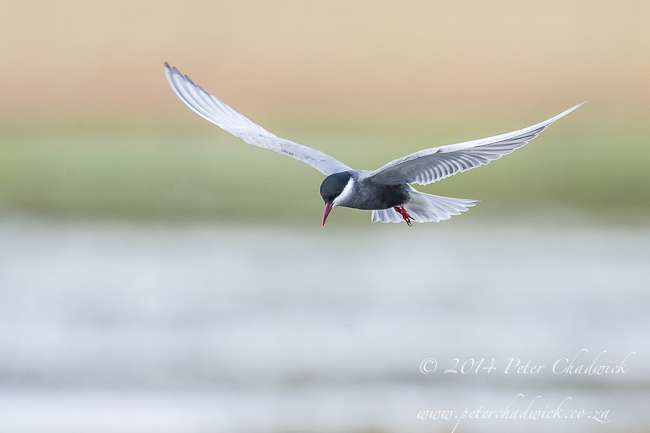 After realising that the coastal fog had put a serious damper on my Lamberts Bay birding, I worked my way south along the R365 and back towards Velddrif. The coastal strandveld was soon producing Southern Double-Collared and Orange-Breasted Sunbirds and Yellow and White-Throated Canaries amongst the more common Cape Sparrows. On top of fence posts Large-Billed Larks sang, heralding in the late afternoon and Capped Wheatear and Cape Longclaw scurried around with beaks filled to overflowing with insects that were destined to be fed to ravenous chicks. Raptors were particularly active with Lanner Falcon streaking across the skies in search of flocking birds, while Steppe and Jackal Buzzards, Rock Kestrels and Black-Shouldered Kites hunted in a more sedate fashion from any elevated perch, waiting for their intended prey to show itself, whereupon they launched with speed and precision. 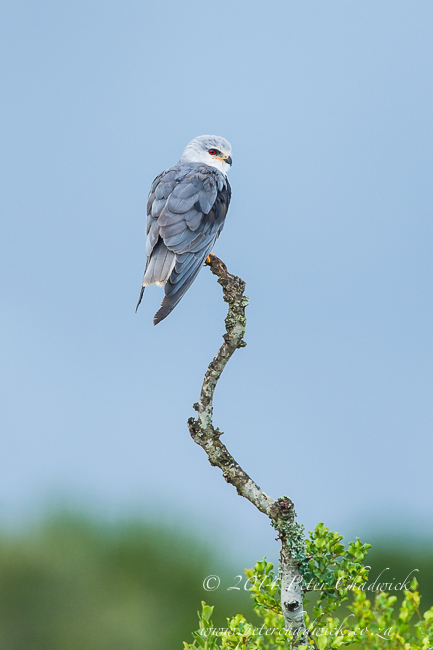 In the fading evening light, the bridge over the Berg River gave tantalising glimpses of Black-Winged Stilts, Pied Avocets and Greater Flamingo but unfortunately these would have to wait as I headed for an overnight campsite on the outskirts of Langebaan. Setting up my campsite the sounds of Spotted & Water Thick-Knees echoed across the still air, occasionally being interspersed with the haunting calls of both Barn and Spotted Eagle-Owls and the harsh calls of Black-Crowned Night-Herons. 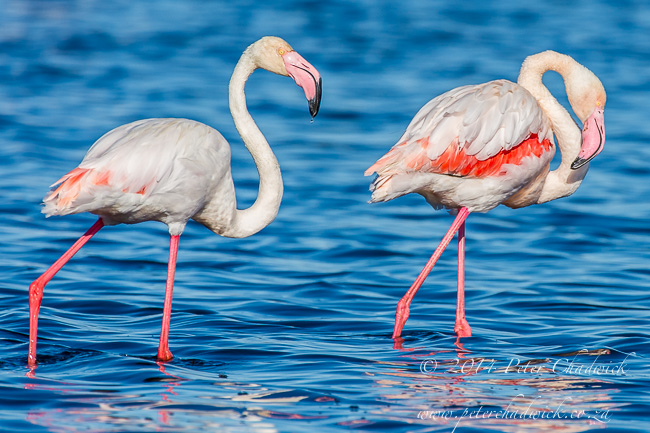 Rising early the next morning, I was in time to hear the last of the nocturnal Fiery-Necked Nightjar’s as flocks of African Sacred Ibis’s cut large wedge shaped V’s through the orange dawn light. I quickly headed back to Velddrif and the Berg River and was relived to see that the Greater Flamingoes of the previous evening were still there and had been joined by a small number of Lesser Flamingoes. Great White Pelicans drifted across the river in the distance and Cape Shovellers, Cape Teals and South African Shelducks dabbled in the shallows. White-Winged and Caspian Terns hovered in the skies above the river, occasionally plunge-diving into the murky fast flowing waters. Driving down to the harbour at the Berg River estuary, Grey Heron, Little Egret and Kelp and Hartlaubs Gulls sat in huddled groups along the various jetties. Pied and Giant Kingfishers used the elevated riggings of the numerous harboured pilchard boats as perches from which to attack small fish swimming in the estuary. In the skies above Little, White-Rumped and African Black Swift wheeled and screamed constantly. 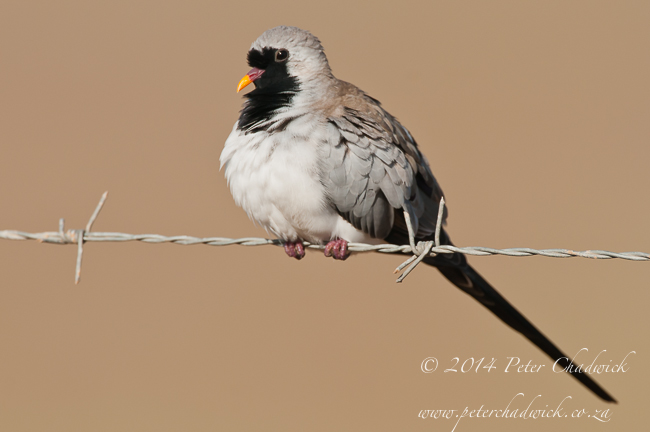 From the Berg River estuary I made a northward detour to Rocherpan. After passing through the reserve entrance gate I sighted Grey-Backed Cisticola, Neddicky, Karoo Prinia and White-Backed Mousebirds feeding amongst the shrubbery, while a small family of Karoo Scrub-Robins ran around on the ground, stopping to snatch at an unlucky insect. In a wooded thicket an Acacia Pied Barbet drummed into a dead log, preparing a hole that would act as its nesting site. Visits to the two hides that overlooked the water produced the occasional Great-Crested and Little Grebe amongst thousands of Red-Knobbed Coots. Efficient parent Egyptian Geese manoeuvred their brood of goslings through sleeping African Spoonbills who quickly had to get out of the way of the scolding geese. A circuitous gravel road back towards the Berg River was a real bonus with Yellow and Small Grey Mongoose sightings amongst the stubble lands covered in feeding Pied Starling and Southern Red Bishops. At one point, a juvenile Cape Cobra sailed across the road stopping to raise its hood as I halted to have a closer inspection of it and at another, a Common Duiker bounded off in a zigzagging run until out of sight. A large shallow pan on one of the farms was surrounded by numerous waders including Chestnut-Fronted Plovers, Marsh Sandpipers, Greenshanks and Ruffs. Three-Banded and Kittlitz’s Plovers both had newly hatched young which they hurried away from my disturbance. Further along the road, a flock of about 10 European Bee-Eaters was a real treat, with me having last seen these colourful birds in the lowveld many years previously. Blue Crane pairs stood around cattle feeding points and Grey-Winged Francolins and Southern Black Korhaans walked slowly through the lands as bright yellow and black Bokmakierie’s sang in duet from the tops of the feeding troughs. 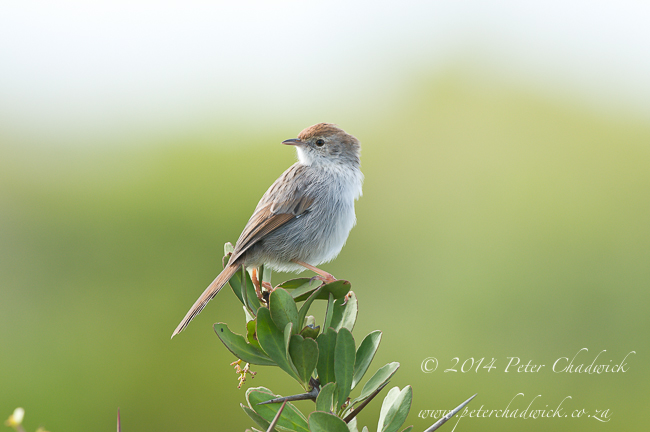 As the day wore on, I meandered my way towards St Helena Bay, stopping in at the harbour where hundreds of Kelp Gulls squabbled amongst seals for the fish offal that was being pumped into the sea. Further out, an abandoned trawler provided the ideal platform for nesting Crowned, Cape and White-Breasted Cormorants. On the nearby beach Swift, Sandwich and Common Terns roosted amongst a pair of African Black Oystercatchers, who idled the time away on one leg and with bills tucked deep into their backs. Ruddy Turnstones poked amongst the small rocks exposed by the low tides and White-Fronted and Grey Plovers, Whimbrels and Curlew Sandpipers ran rapidly to and fro as the waves exposed marine invertebrates along the shoreline to fill their insatiable appetites. 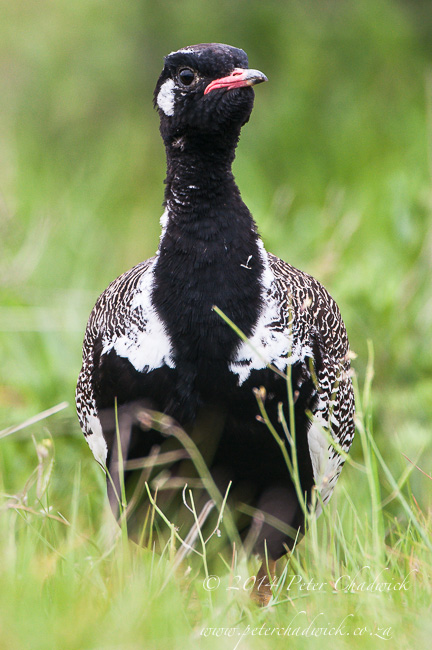 My final trip for the day took me along another gravel road between St Helena Bay and Paternoster. Banded Martins and Barn Swallows flew in mixed flocks together with the much smaller Brown-Throated Martins. Familiar Chats perched alongside pairs of their darker relative the Anteating Chat. As the sun began to set behind wispy clouds, the privilege of adding a lifer to my bird list presented itself as a pair of Cape Clapper Larks flew in to feed on the roadside. 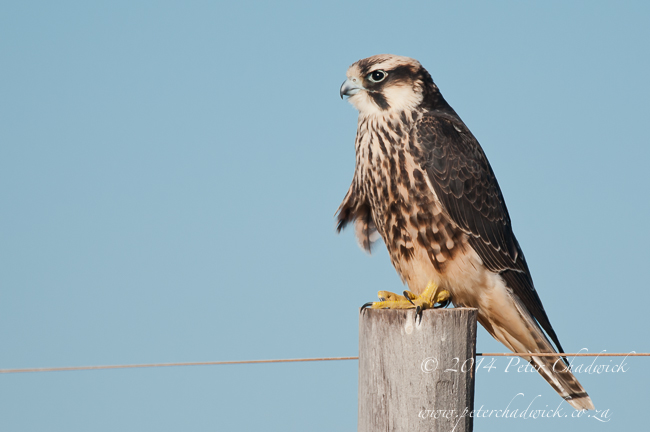 Overnighting at Paternoster, I spent the next day with the West Coast Rock Lobster fishers of this small town and whose characters are about as weathered, worn and colourful as their small fishing boat fleet. Heading slowly back to Cape Town my journey of this stretch of coastline took me through the West Coast National Park that in its own right is a fantastic birding destination. 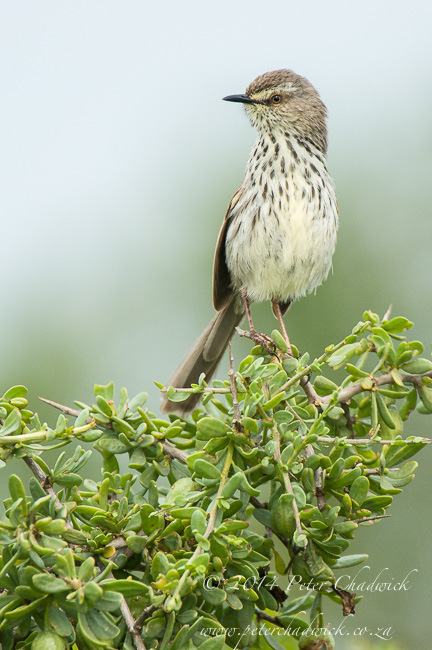 Season and weather: The climate is Mediterranean with warm summers and mild winters. Wind is present throughout the year with rain falling mainly in the winter months. Coastal mists and fog is a regular feature of the coastline. Always be prepared for sudden changes in the weather. The summers are the dry and dusty months, whilst winter is the time when the fynbos is lush, green and in flower. The best months to visit are April and September.

Habitats: The West Coast has a great diversity of habitats. Coastal Sandveld dominates with a variety of smaller habitats interspersed between. On the coast, rocky and sandy shorelines occur. The area is particularly well known for its vast fields of spring flowers.

Accommodation & Activities: A variety of accommodation is available in the towns of Lamberts Bay, Paternoster and Langebaan. A selection of water sports can be undertaken in zone A & B of the Langebaan Lagoon and in the Paternoster bay. Mountain biking is also possible throughout the area. There are a number of hiking trails and day walks. Whale and dolphin watching is possible all along this stretch of coast.

Getting There: To reach Lamberts Bay from Cape Town, follow the N7 to Clanwilliam and then follow the R364 to the coastline. Various gravel roads head southwards from Lamberts Bay towards Velddrif. The West Coast National Park is situated approximately 90km’s north from Cape Town along the R27.

South African National Park:
Tel: +27(0) 22 772 2144
Email: This email address is being protected from spambots. You need JavaScript enabled to view it.
Web: www.sanparks.org

For Bookings in Paternoster contact:-
This email address is being protected from spambots. You need JavaScript enabled to view it. or visit www.stayinpaternoster.co.za