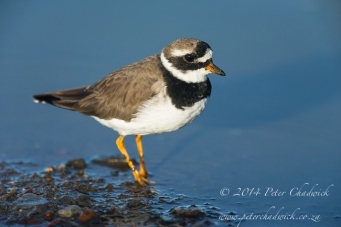 Baden-Powel drive is one of the many roads that runs along the spectacular False Bay coastline and links various parts of the Cape Town metropole. The road which runs right next to the sandy beach front and crashing waves will often produce views of Cape Cormorants flying in their characteristic V-shaped skeins as well as endangered African Black Oystercatchers foraging amongst the kelp debris together with White-Fronted Plovers.

What most people do not realise is that just behind the dunes on the inland side of this road lies one of the best birding locations in the entire Cape Peninsula and on hearing the name of this location will be both surprised and also perhaps slightly shocked with a subconscious turning up of the nose. Strandfontein Sewage Works can produce more than 80 species in a single morning and is an ideal destination for both beginner birdwatchers and serious twitchers to test their birding skills from the comfort of their vehicles. The sewage works comprises numerous filtration ponds surrounded by reed beds that attract huge numbers of waterfowl. The road ways between the ponds are verged by lush grasses, shrubs and coastal thicket that also attract a fair share of fynbos specials. 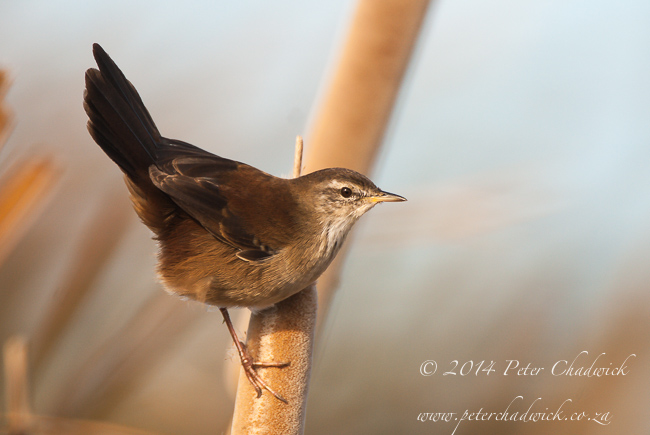 I had long last visited this birding hotspot and it was only when seeing the numerous Swift Terns flying inland from False Bay with beak-fills of silver bait fish that I remembered that the sewage works were just over the dunes. Vowing to return and make a full days visit to the sewage works with my camera and binoculars, I was back the next weekend and arrived in the pre-dawn light with a gusty south-easter wind blowing.  As I waited for the sun to rise over the distant mountains, I watched as mermaid-tail cloud formations changed from a subtle pink colour to dark oranges and angry reds before the sun popped over the mountain peaks and revealed Swift and Caspian Terns and Kelp and Hartlaubs Gulls being buffeted about and being blown out to sea where they would feed. Purple Herons battled, flying into the wind before plummeting down into the reed beds and cover. Near the entrance gates to the sewage works White-Breasted Cormorants and African Darters preened and stretched their wings while sitting on the artificially built nesting platforms. 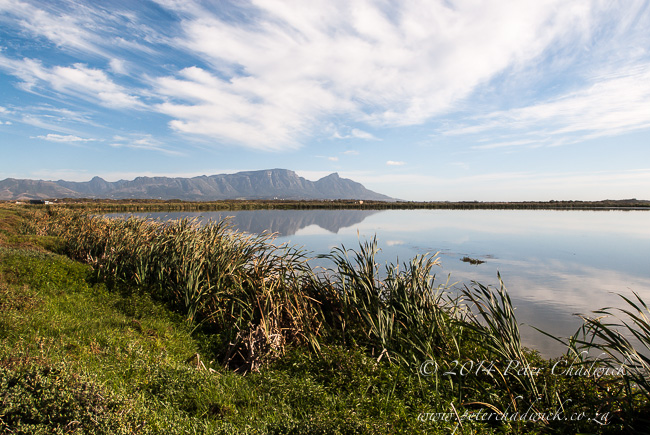 As the sun rose higher with reflections of pinks, yellows and oranges from the clouds on the pans, a lonely Black-Crowned Night-Heron headed to its roost and numerous pink flocks of Greater Flamingo became apparent in the middle of the water-bodies, shifting in a constant cackling mass as they fed with heads inverted into the water. Occasionally, the flocks would panic at some unseen danger and take to the skies with flashes of vivid pink and black that was exposed as their wings opened. Masses of ducks lay in small groupings across the pans and mainly comprised of Cape Shoveller, Red-Billed Teal and Yellow-Billed Duck. Also present where Little, Great–Crested and Black-Necked Grebes. Careful searching amongst these flocks revealed smaller numbers of Cape Teal, diminutive Hottentot Teals and even a few Southern Pochard’s and Maccoa Ducks. 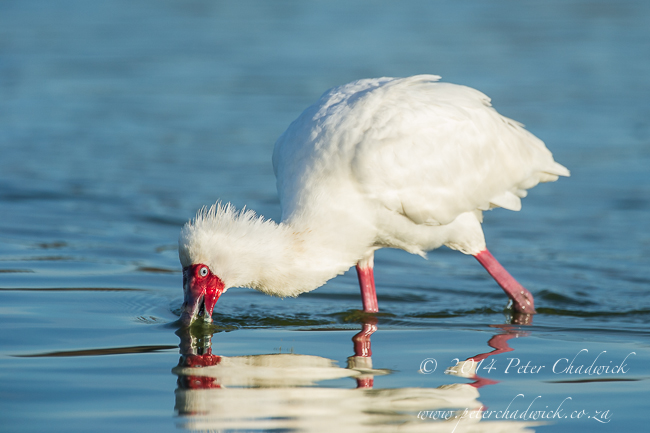 From the reedbeds that lined the pans Cape Bulbuls sat tall on the tops of the reed-beds while Lesser Swamp-Warblers called from within together with Clicking Stream Frogs and Arum-Lilly Frogs. Le-Valliant’s Cisticola pairs showed themselves for brief periods and called from the reed tops before disappearing again into the thickets below and at one point a Little Rush-Warbler sat still long enough for me to photograph it. In the roadways, Kitlitz Plovers, Cape Wagtails, Cape Longclaws, African Pipits and Red-Capped Larks all searched for insects amongst the short grasses. Bokmakierie’s flew between stands of bushes and Common Fiscal sat aggressively on top of prominent perches. The sewage ponds are well known for their waders but as it was already late summer and most of these birds had already headed northwards, I was lucky to view a single Little Stint and a Common Ringed Plover that were in full breeding plumage and clearly would soon on their way back to northern climes. 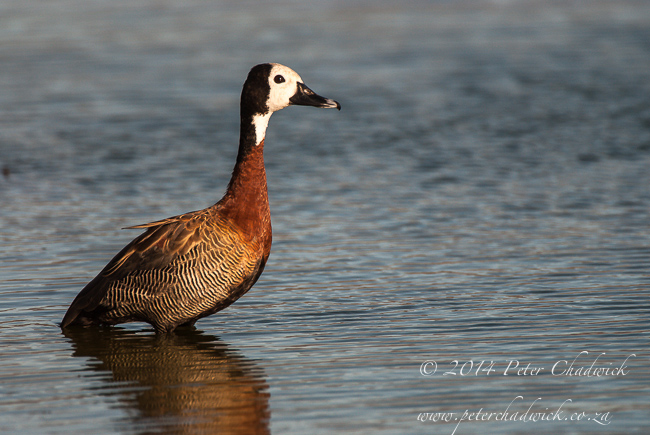 Adjacent to some of the pans were deep channels filled with flowing water. This provided ideal foraging grounds for Glossy and African Sacred Ibis, Spur-winged and Egyptian Geese, Cattle Egrets and bathing Hartlaubs Gulls that ducked and splashed with much vigour. In the quieter back waters of these channels Red-Knobbed Coots and Common Moorhens fed on water weeds as Black Crake and African Purple Swamphens skulked along the edges of the waterlogged vegetation. In the skies above these channels large swarms of insects attracted huge swooping flocks of Barn, White-Throated and Greater-Striped Swallows and Brown-Throated Martins§ together with Little, Alpine, African Black and White-Rumped Swifts. As I sat watching one channel a Peregrine Falcon swooped below the skyline down the length of one of these channels and shattered the peace where a small group of Little Grebes and Common Moorhens were feeding. The Little Grebes dived under water in panic and one of the Moorhen’s was not so lucky as the falcon swiftly latched onto it in an explosion of feathers before quickly disappearing with its quarry. 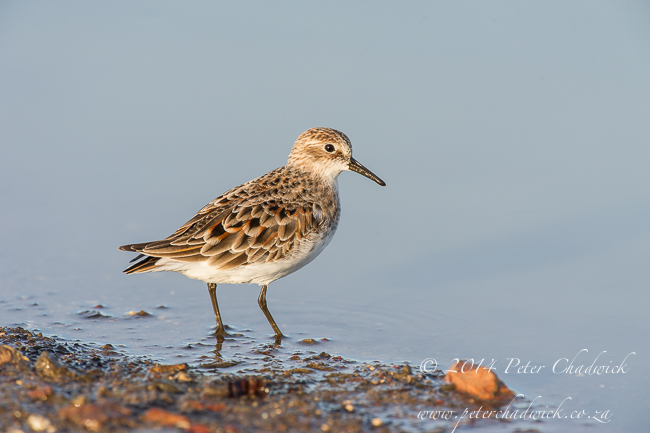 Continuing to drive around the pans and down towards the coastline, I watched as two African Marsh Harriers quartered backwards and forwards low over the reedbeds, making occasional stoop-drops after a prey item. Close by, a Black-Shouldered Kite sat on a tall pole whilst above it a Rock Kestrel screamed loudly and made half-hearted stoops of antagonism at the unconcerned Kite. The pans closer to the coast were shallower and also had larger areas of exposed mudflats. These attracted Blacksmith Lapwings and smaller Three-Banded Plovers. Pied Avocets with their strange looking upturned bills sifted the water for food with sideways sweeping motions of their heads and equally strange looking Black-Winged Stilts on their exceedingly long legs fed in slightly deeper water, pecking at unseen morsels. On the far banks and away from disturbance, Great White Pelicans sat with half-open wings, occasionally flapping them to get rid of any lingering water. Reed Cormorants sat in a similar pose alongside them and had to occasionally duck out the way as the pelicans flapped their heavy wings dangerously close by. For me, a surprise was a flock of ten White-Faced Duck. I am not accustomed to seeing these birds as far west as on the peninsula but on reading up later on, I see that this is one of the species that is extending its range in a westerly direction and this is probably due to the large proliferation of dams that have been built throughout the country. 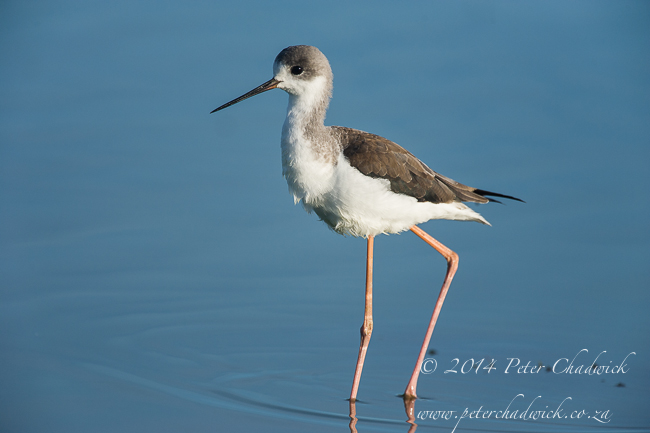 Making a last turn around the pans, I found one that was being overrun by the invasive water hyacinth and although this plant is a huge problem it provided the ideal spot for Yellow-Billed and Little Egrets and Grey and Purple Herons to hunt for prey. Black-Headed Herons stood motionless near by on the dry banks as Common Waxbills, Pin-tailed Whydahs and Cape Canaries fed amongst the seed laden grasses. 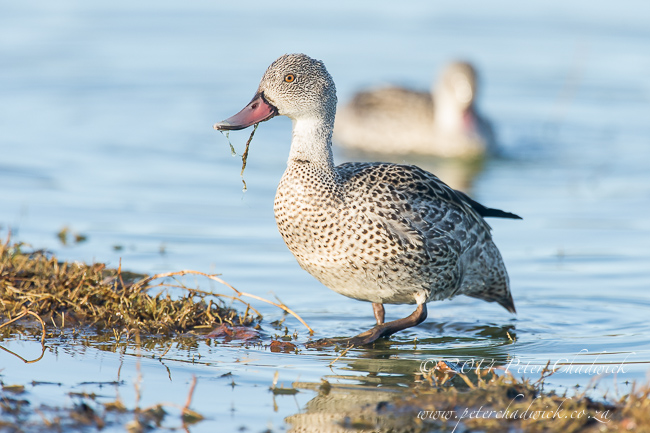 During a mornings birding, I had tallied numerous species, seen some amazing interactions and had easily photographed 26 species of bird which confirmed beyond a doubt that despite its dubious sounding name this birding location would be seeing a lot more of me in the near future. 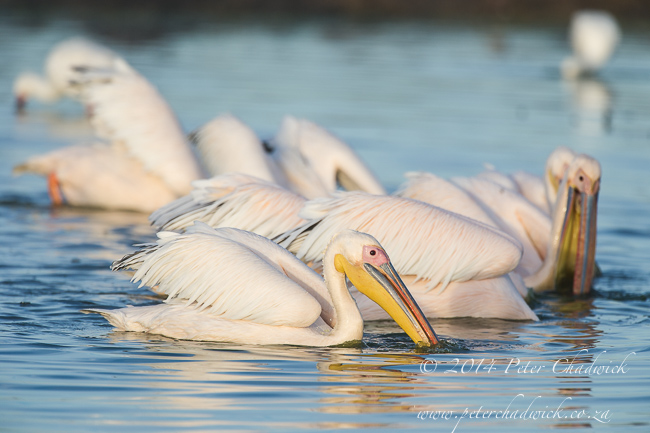 Season and weather: Summers are warm often with South-Easter winds blowing in from the sea. Winters are cool and light rain can often be expected.

Habitats: Open pans of water that fluctuate in levels and surrounded by extensive reedbeds and a few patches of coastal fynbos and thicket

Getting There: To enter the Sewage Works from the False Bay side follow the R310 along Baden Powel Drive. Turn inland at the Strandfontein T-Junction (M17) and follow this road for approximately 4 kilometers. The turnoff to Zeekoeivlei and the sewage works is poorly marked amongst a stand of blue gum trees. Follow this road to the entrance of the works.