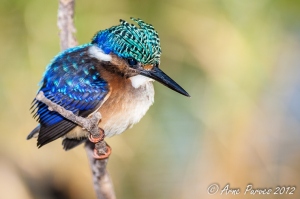 This young Malachite Kingfisher was fishing under a bush that was hanging over the Orange River in the Richtersveld National Park. It tolerated my close presence and went about learning how to fish. As he gets older his bill will become red.

In the Richtersveld temperatures quickly reach 40+ degs in summer. This shot was taken mid-summer (30+ degs) at 07h30 in the morning. By about 8am most bird activity had stopped until the cooler afternoon hours set in. This little guy spent the day under his bush and I even went back and photographed him later in the day. Being observant and paying attention to animal behaviour will often pay dividends if you are prepared to put in the effort.