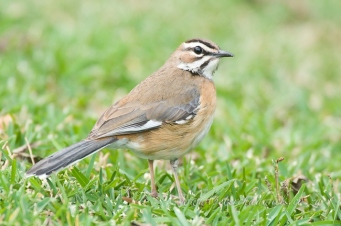 Nestled in the Zululand bushveld just a short distance away from the town of Hluhluwe, lies Bonamanzi Game Reserve, which is well known for its excellent birding. I had checked into the reserve a short while earlier and was now relaxing in a comfortable lounge chair and overlooking a picturesque pan. The pan narrowed in front of my lodge and African Jacanas trotted about, lifting their legs high with each stride so that their long toes would lift off the lilly pads that they were walking on. A more typical and tranquil African setting would be hard to find and I felt myself immediately relaxing with my soul starting to recharge itself after the drive up the N2 from Durban.

Somewhere close by an African Fish Eagle gave its characteristic call and a Southern-Banded Snake-Eagle landed in a dead tree. On the banks of the pan, a mixed herd of Nyala and Impala fed peacefully as Vervet Monkeys chattered and played in the trees above them and a pair of Yellow-Throated Longclaws wandered at their feet. As I continued watching, Red Duikers emerged from the dense undergrowth and a pair of Egyptian Geese disturbed a Grey Heron that had been standing motionless in the water. 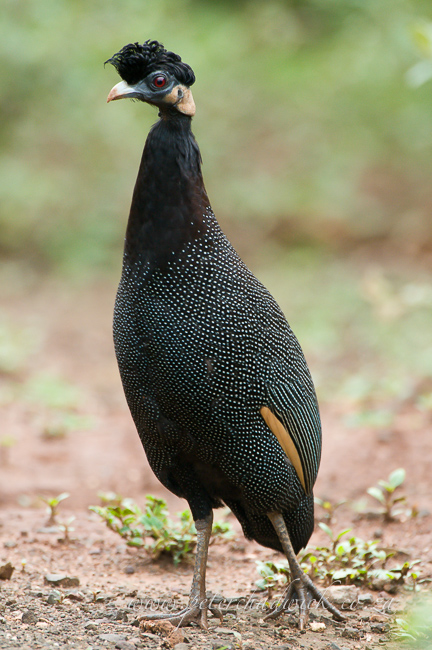 1 of 7. Crested Guineafowl are regularly sighted at Bonomanzi

In the openings around the lodge a flock of Crested Guineafowls, with their Afro hairstyles, scratched in the hard ground, occasionally breaking away from searching for food to chase one another around with much cackling calling. Purple-Crested Turacos hopped around in the treetops flashing their crimson wings. A bird party then also passed through, comprising of an African Paradise Flycatcher pair, Ashy Flycatchers, Chin-Spot Batis's, Spectacled Weavers, a Fork Tailed Drongo, a Cardinal Woodpecker and a pair of Brubru's. 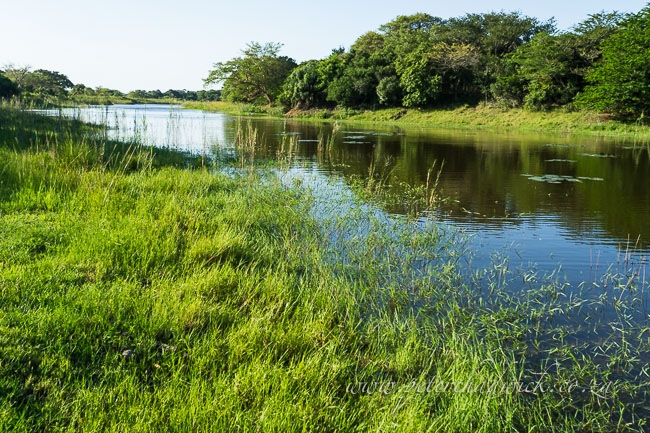 2 of 7. An extensive wetland system crosses Bonamanzi and hosts a plethora of waterbirds

After having lapped up the fantastic scenery around me, I finally decided to drive out into the reserve as the late afternoon headed towards evening. My first bit of excitement was when I found Dark-Capped Bulbuls and White-Bellied Sunbirds mobbing a well camouflaged and by now highly agitated Vine Snake that puffed out its throat in anger. In the dense undergrowth, Yellow-Bellied Bulbuls chatted constantly to one another and White-Throated Robin Chats and Red-Capped Robin Chats showed themselves briefly in openings in the vegetation. At a seasonal pan deep in the bush, hordes of Cape Turtle Doves, Violet-Backed Starlings and Cape Glossy Starlings came down to drink and a walk around the pan showed me warthog, impala, nyala, kudu, genet, mongoose and porcupine spoor in the drying mud. Thousands of tiny frogs that had just changed from being tadpoles swam in the shallows giving the pan a thick black writhing edge of life. Returning to camp a beautiful Verraux's Eagle-Owl with its pink eyelids sat on the bough of an ancient tree before flying off with heavy wing beats. Darkness brought a cacophony of frog calls from many different species and the wailing cries of Thick-Tailed Bushbabies as well as the calls of Water Thick-Knees and a distant African Wood Owl. Around the outside lights of the lodge Tropical House Geckos circled the lights like an armada of battleships waiting to strike at any insect that ventured too close. 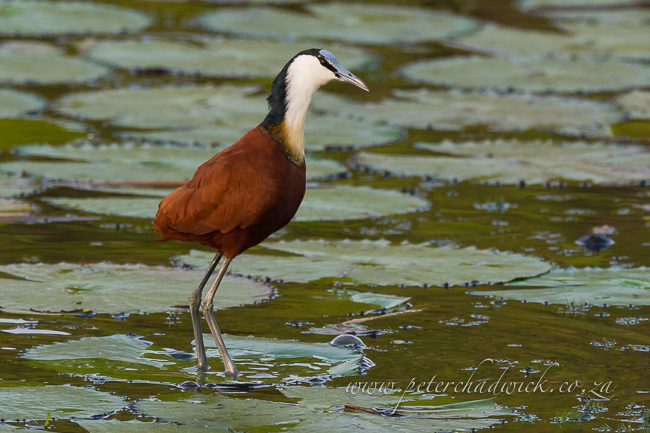 3 of 7. African Jacanas wander the lilly-pads in front of the main lodge

Early the next morning, I walked the “Salmon Nogoma” trail that first skirted a series of pans, then ventured into Acacia and Dichrostacus thickets and finally returned through sandveld forest to the camp. On the lilly covered pans a frantic African Jacana adult tried to protect its two young from huge catfish that were attempting to swallow the young birds in their gaping mouths. Bravery won the day and the jacana managed to steer his young away to safety. In the trees, dainty Yellow-Breasted Apalis’s gleaned minute insects from amongst the bark and leaves. Standing quietly with my eyes closed, I was able to identify the sea-saw calls of Red-Capped Robin Chats, the scolding of Yellow-Bellied Bulbuls, the echoing gwara-gwara of Purple Crested Turacos, complaining Egyptian Geese, the monotonous call of Yellow-Fronted Tinker-Barbets and the calls of Kurrichane Thrushes, Red Eyed Doves, Bennett’s Woodpecker, Green Backed Camaroptera, Hammerkop, Lesser-Striped Swallows, Fork-Tailed Drongos and the mournful call of Emerald-Spotted Wood-Doves. Opening my eyes again, I was in time to see a blue arrow shoot past as a Malachite Kingfisher flew to a stand of reeds standing in the shallow water. A Slender Mongoose then ran down the path ahead of me and startled a family of Crested Francolin that erupted into a panicked flight. 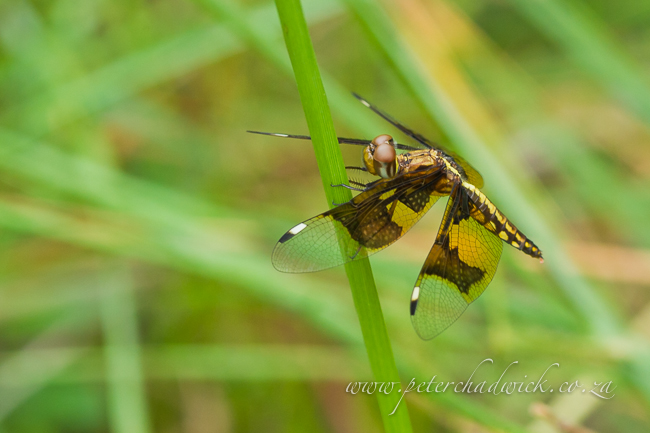 4 of 7. The wetlands at Bonamanzi attract a large diversity fo Dragonflies and the surrounding bushveld is host to countless butterflies

In the Dichrostacus woodland, I ticked off Eastern Nicator, Sombre Greenbuls, Grey-Headed Bush-Shrike, Black-Backed Puffback and Orange-Breasted Bush-Shrike. A Vervet Monkey troop that was feeding nearby quickly dashed into a tree and started alarm calling vociferously while starting into a dense thicket where perhaps a leopard hid itself as I wandered the trail. Butterflies where plentiful in the early morning sun, with Green-Veined Charaxy, Citrus and Blue-Veined Swallowtails, Orange and Lemons, Blue Pansies and Red Tips. In a stand of Tamboti Trees, a large water monitor hauled itself heavily through the soft sand and I could see where porcupines had chewed away the bark at the bases of the trees. In the pathway, an army of inch-long Matablele Ants marched purposefully with their massive mandibles and giving off a heavy smell of formic acid. 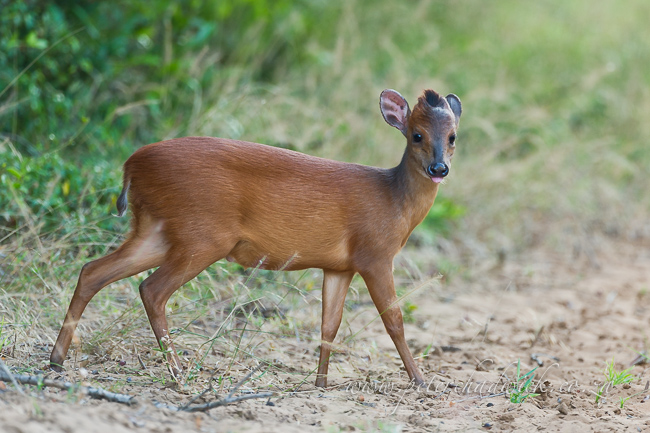 5 of 7. A Red Duiker cautiously crosses a sandy track as dusk falls

Crossing over into the Sandveld Forest, I was fortunate to find another birding party with Dark-Backed Weavers, Olive Sunbird, Southern Black Tits, Rudd’s Apalis, Golden-Tailed Woodpecker, Scimitarbill and a pair of Black-backed Puffbacks with two soliciting youngsters. By stopping to listen occasionally, I eventually managed to find Pink-Throated Twinspots feeding on the edge of a thicket and an additional bonus was a tiny Suni that showed itself briefly before dashing away into the impenetrable undergrowth. A Grey Sunbird and a pair of Gorgeous Bush-Shrikes were my final rewards for walking this worthwhile trail. 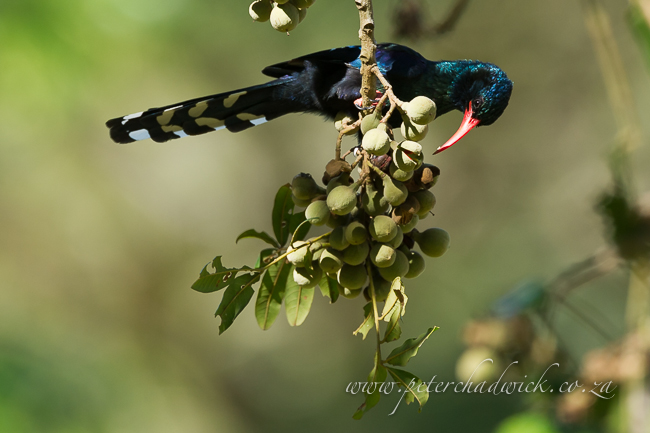 6 of 7. A Green Wood-Hoopoe searches for insects

By this time I had worked up a good appetite and treated myself to a large well-prepared breakfast with all the trimmings and glasses full of fresh fruit juice to quench my thirst at the dining hall. On the lawns adjacent to the dinning hall, Bearded Scrub-Robins fed alongside Pied Wagtails and a family of Warthog that grazed the green grasses. After a quick shower, I reluctantly checked out and took a slow drive towards the gate where I found a large flock of Black-Bellied Starlings all singing simultaneously from the top of a Flat Crowned Albizia. At the gate itself, a final birding party added Black Cuckoo-Shrike, African Golden Oriole, Speckled Mousebird Southern Black Flycatcher, Black-Collared Barbet and Long-Billed Crombec to an impressive 24 hours in a place that definitely lived up to its fine reputation as one of the premier birding locations in the country! 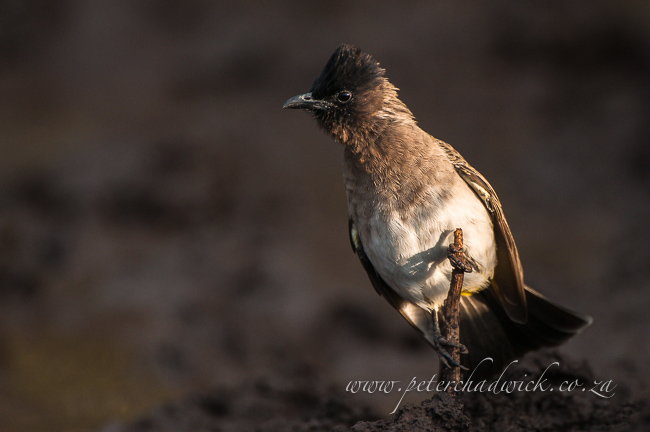 7 of 7. A Dark-Capped Bulbul perches next to a muddy waterhole before drinking and bathing.