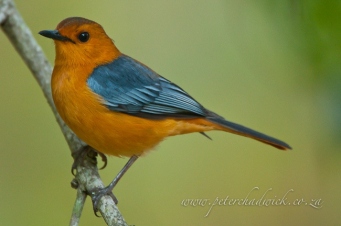 Zululand in northern KwaZulu Natal is well known for its extensive game reserves covered with teaming wildlife, but en-route to these large wild areas lie a suite of smaller reserves that are at least equally but often more exciting in the small creatures and birds that can be viewed within their boundaries. These small reserves, in many cases, have become island refuges amongst large tracts of transformed land and are home for some of the countries most sought after bird species that need to be added to any twitchers list.

One of the most well known of these is the aerial boardwalk at Dlinza Forest in Eshowe. The reserve itself is only 250 hectares in size but is host to at least 65 bird species and is also home to shy forest animals such as the Blue Duiker and Bushpig. What really makes bird viewing at Dlinza Forest exciting is that the boardwalk is uniquely built into the forest canopy and at one point you can climb up a 20m high observation platform that allows panoramic views overlooking magnificent giant forest trees. The best time of the year to visit is in early spring when the forest is alive with birds hurrying backwards and forwards trying to show off their attributes so as to attract a mate for the breeding season. 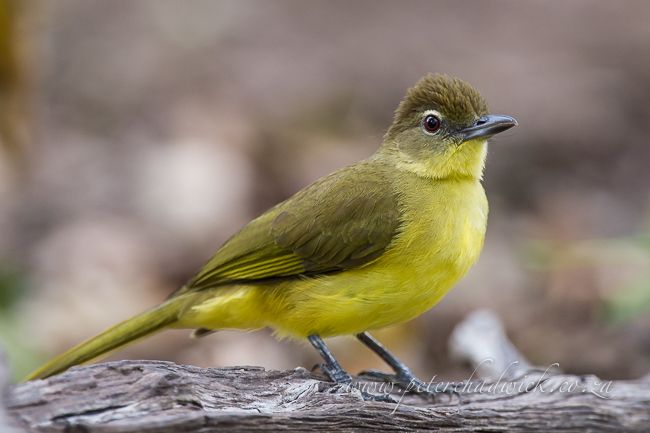 My first visit to the forest was early in the morning and after having bought my ticket and having spoken to the ever friendly and knowledgeable guides, I set off in eager anticipation with my camera at the ready. I barely stepped through the gate and was immediately greeted by a pair of Square-Tailed Drongos who were busy mobbing a male Golden-Tailed Woodpecker as it worked its way up the trunk of a large tree. A short distance on and just before stepping onto the boardwalk, movement in the dead leaves attracted my attention to my first “lifer” of the day – a pair of Spotted Ground Thrushes, who were flicking dead leaves over in search of a tasty morsel hidden beneath the leaves. Tambourine and Lemon Doves were soon added to the list and in the background the ever-present sea-sawing call of Red-Capped Robin-Chat and wailing Trumpeter Hornbills kept my sense of hearing fully tuned. I was able to quickly tick off Dark-Capped Bulbul and Yellow-Bellied and Sombre Greenbuls and Crowned Hornbills by listening to their calling deep from within the forest. Moving slowly and quietly along the boardwalk I was also fortunate enough to view a Narina Trogon male as it briefly flew between two trees and landed, where it once again sat motionless long enough for me to photograph it. 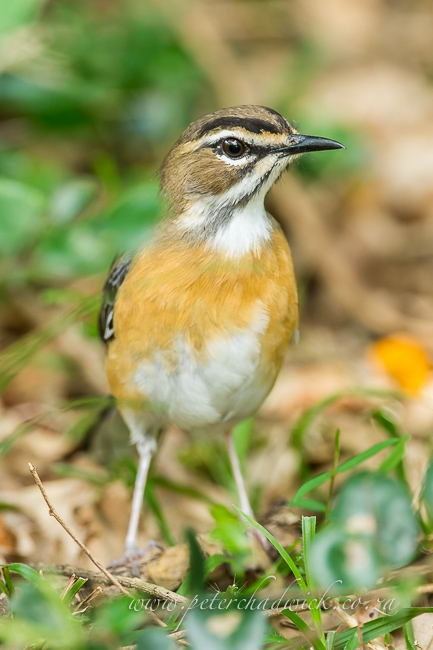 2 of 7. Bearded Robin-Chat in the forest undergrowth

After spending the rest of the morning at Dlinza Forest, I set off to Enseleni Nature Reserve, timing it such that I would get there to maximize on the late afternoon birding activity. Like Dlinza, this reserve allows one to walk and there are two excellent short trails that cover the variety of scenic habitats. Parking my vehicle, my welcome, was a pair of Gorgeous Bush-Shrikes that initially gave away their presence from their calls. On the edge of the parking area, a pair of Green-Backed Camaroptera hopped on the ground, while above a female African Paradise Flycatcher flittered amongst the branches, snatching at insects. 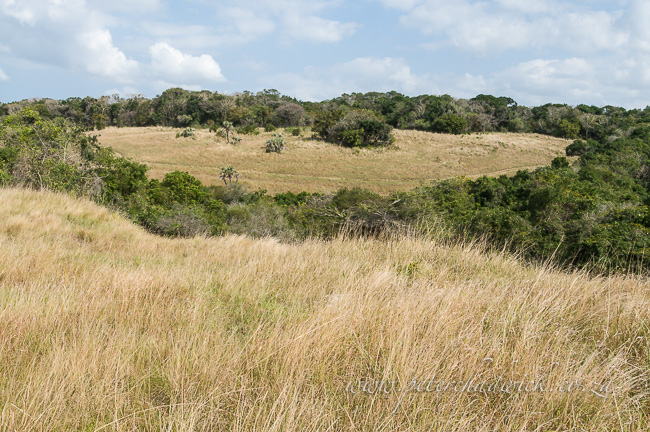 3 of 7. Mixed coastal grasslands and forest in Enseleni Nature Reserve

Setting off along the scenic Mvubu Trail and past an extremely relaxed herd of Burchells Zebra, there were signs of Bush Pig everywhere and down on the waters-edge a very large Water Monitor Lizard slithered back into the dark waters as I approached. Purple-Crested Turacos called regularly and were most easily seen as they flew from one side of the river to the other. Black-Eared Starling, Red-Headed and Spectacled Weavers and African Green Pigeons fed together in a large Fig Tree that was heavily laden with ripe fruit. Walking through the grasslands, thickets and then riparian forest, I was amazed at the variety of colorful butterflies that included large slow flying Swallowtails and fast flying Green-Veined Charaxes. In the skies between the banks of the river, flocks of Little and White-Rumped Swifts wheeled and screamed and Red-Breasted and Lesser-Striped Swallows hawked insects. Red Duikers were plentiful amongst the forest glades and above them a White-Throated Robin-Chat, Yellow-Breasted Apalis, Black-Throated Wattle-Eyes, Yellow White-Eyes and a Brubru gleaned insects from amongst the branches. Sitting quietly next to the river bank for half an hour or so, I was very lucky to watch an African Finfoot as it swam amongst the shaded edges, diving occasionally below the water weed. In the grasslands, Yellow-Throated Longclaws made brief appearances as they flew from one patch to the next and Zitting Cisticolas sat atop long swaying grass stems. 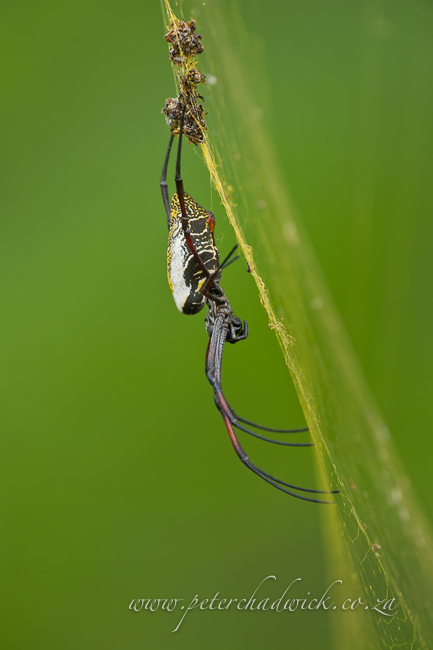 Slightly further south from Enseleni Nature Reserve and along the coastline lies the Amatigulu Nature Reserve, which within its small boundaries has coastal grasslands, Lala-Palm bushveld and coastal, dune and riparian forest. With a checklist of over 300 bird species this small and rather unknown reserve is well worth a visit and it is really worthwhile making use of the local bird guides to show where the best birding can be found when visiting the reserve. Passing through the entrance gate, a flock of White-Fronted Bee-Eaters provided a pleasantly spent half-hour watching as they hawked insects from the air and then returned to their perches to beat and then swallow their prey. Brown-Crowned Tchagra, Orange-Breasted Bush-Shrike, Black-Backed Puffback, Fork-tailed Drongo, Spectacled Weaver and Cardinal Woodpecker moved together as a birding party through the shrubbery. From deep within the thicket a family of Terrestrial Brownbuls constantly chattered away to one another and a White-Browed Robin-Chat briefly hopped into an opening. 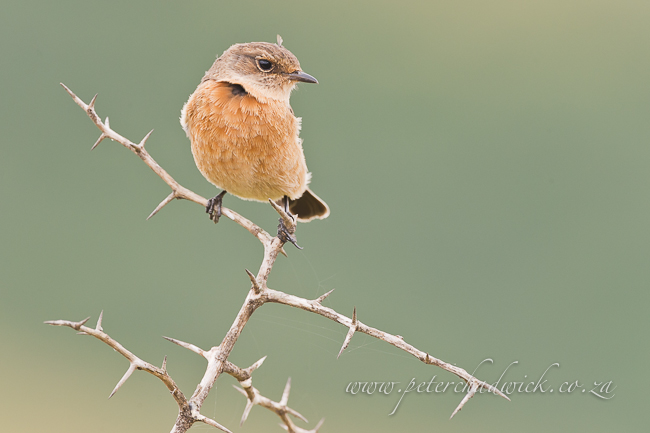 Driving along the rough tracks towards the river, a pair of Jackal Buzzards circled overhead and a Black Sparrowhawk flew purposefully whilst on the hunt. At the river an African Fish Eagle sat in a dead tree and I was fortunate enough to see a Giant Kingfisher launch from its perch and plunge into the water emerging with a large fish, which to me seemed far too big for the kingfisher to swallow. The kingfisher flew to a perch and proceeded to repeatedly beat and soften the fish for the next 20 minutes before finally being able to swallow it head first. In the rank grasslands Thick-Billed Weavers and Southern Red Bishops were building their oval shaped nests and a Broad-Tailed Warbler first called and then climbed up a swaying reed stem before flying off with a slow and laboring flight. 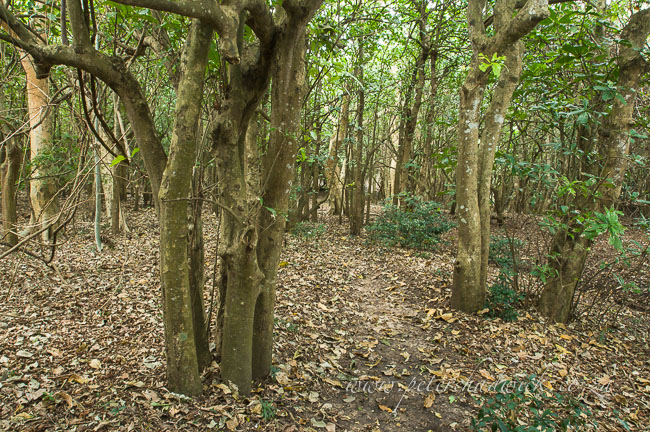 6 of 7. The trails at Enseleni Nature Reserve lead through a variety of habitats including riparian woodland

As I settled my deck chair, in the shade of the picnic-site, I was joined by a family of mischievous Vervet Monkeys, who totally ignored me and played constantly, leaving me to reflect that I needed to spend far more time birding in these small natural gems and spend less time rushing off to the bigger and better known game reserves. 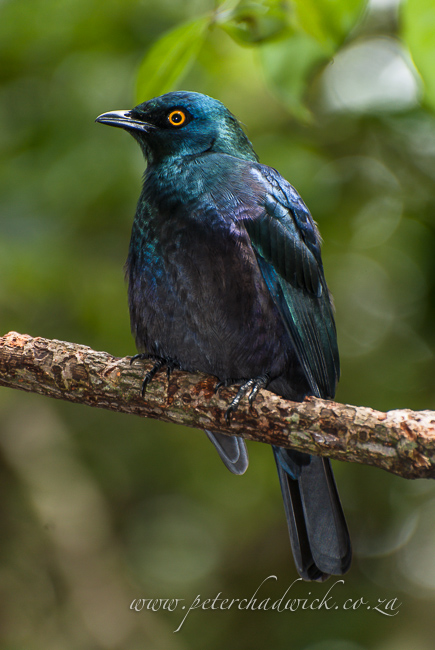 7 of 7. Black-Bellied Starling are common in the Zululand coastal reserves.