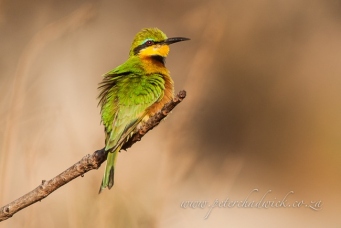 Above me White-backed Vultures circled high in the sky, riding the hidden thermals that the vast body of water below them created. An Amur Falcon flock flew across the skyline hunting insects that were eaten on the wing and a Southern Yellow-Billed Hornbill pecked at ants attracted to a fresh pile of elephant dung and nearby a warthog wallowed in deep mud gloriously rolling around in the thick ooze. The smell of the dusty, dry bushveld permeated my nostrils and the sounds of Cape Turtle Doves and displaying Purple and Lilac-Breasted Rollers completed the sensory overload that was joyfully bombarding me as I drove ever nearer along a dirt track to the White Elephant Lodge situated deep in the heart of the Phongola Game Reserve.

It was hard to believe that this piece of really wild bushveld had not so long ago been farmlands where cattle grazed and fields of tomatoes and cotton stretched across the landscape. Through the foresight of a few of the landowners, they worked together in dropping the fences that demarcated their property boundaries and let the land reclaim back towards its original wild state. Others soon joined them and with the Jozini Dam as the central point an area of 20000 hectares were soon set aside as a private nature reserve that joined with the original conservation area in the north and which is managed by Ezemvelo KZN Wildlife. The wildlife slowly returned and was boosted by re-introductions and now excellent sightings of four of the big five can be had together with general plains game. Birding is also excellent as well as I was soon to find out. 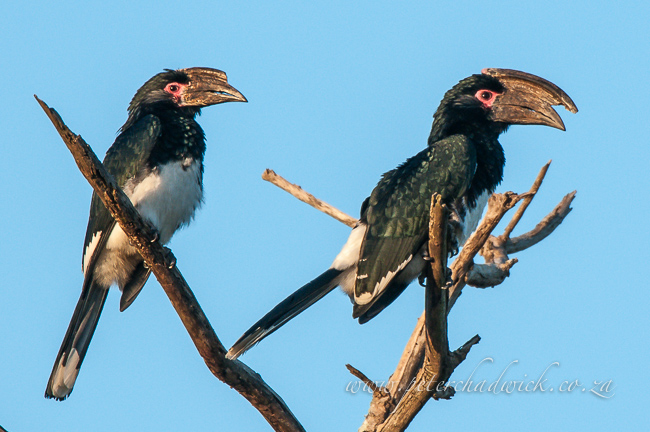 1 of 6. Male and Female Trumpeter Hornbills perched in the trees around the White Elephant Lodge

Driving up to the original farmhouse that had now been converted into the lodge, I barely had time look at the Trumpeter Hornbills and Purple-Crested Turacos hopping around in the lodge grounds and to check in at reception and offload my luggage at my luxury tent before I was enjoying a scrumptious high tea and being shepherded by super friendly staff into an open land rover. After a short drive, I along with another group of English guests were clambering onto a houseboat that chugged slowly out onto the lake. Pushing through the narrow reed-lined channel, a Purple Heron was startled and flew up with a harsh sounding squawk. Pods of hippos were scattered into small groups throughout and snorted and occasionally mock-charged as we idled past. Nile crocodiles lazed in the late afternoon sun on the mud flats that edged the lake and in the distance a herd of elephants grazed as a lone bull Giraffe walked slowly to the waters edge before stooping down to drink. Further around the shoreline, herds of Impala, Nyala, Warthog and Burchelles Zebra either drank or fed on the green lush grass nourished by the waters. 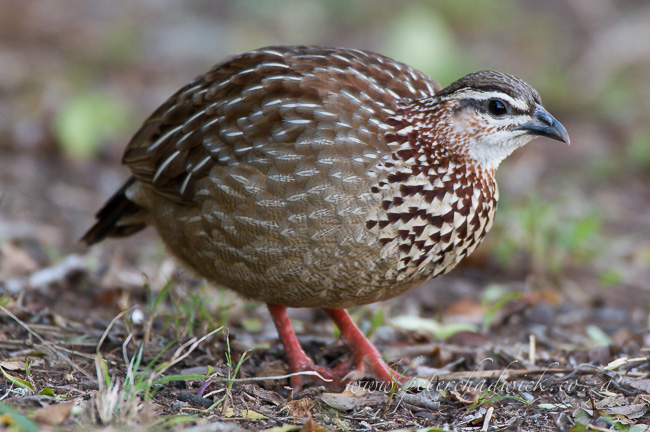 2 of 6. A Crested Francolin scratches in the dead leaf litter for insects

A highlight was watching three White Rhino’s wallowing in the shallows and then covered in thick mud, they continued grazing with attendant Cattle Egrets scurrying in to snatch at any insect morsels disturbed by the massive beasts. Yellow-Throated Longclaws and Croaking Cisticolas were displaced from the grassland as the rhino wandering along. With Richard our skipper, expertly steering the boat through the shallows, great birding was also had with Grey, Black-Headed and Goliath Herons, Great and Yellow-Billed Egrets, Blacksmith Lapwings, African Wattled Lapwings, Three-Banded Plovers, Egyptian Geese, African Darters and Reed Cormorants being quickly ticked off. An African Fish Eagle caused mayhem amongst a flock of African Openbills that immediately started squabbling with much bill snapping and wing flapping as soon as the danger of the fish eagle had passed. A small flock of African Spoonbills and Yellow-Billed Storks rested on the short grasses and a special treat for me was a sub-adult Saddle-Billed Stork that wandered the shallow waters in search of prey. With the sun having melted into the lakes waters at the end of the day and with darkness quickly approaching, we all returned back to the lodge for a cleanup, scrumptious meal on the veranda and much chatter recounting the day’s events before tumbling into bed where sleep quickly called. 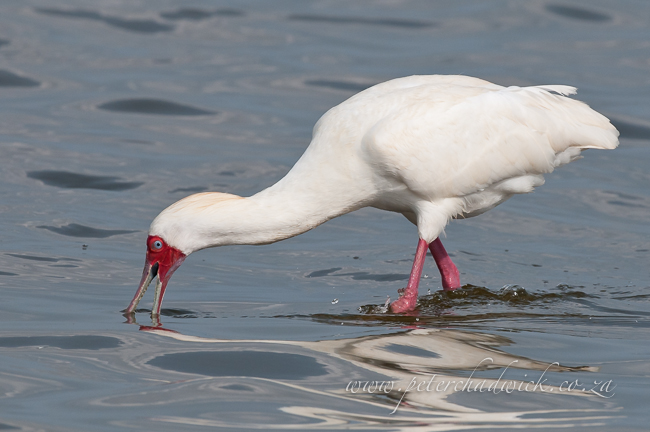 3 of 6. An African Spoonbill feeds in the shallows of Lake Jozini

My next recollection after a fitful nights sleep was the sound of Swainsons Spurfowls, Crested Francolins, Fork-Tailed Drongos, Rattling Cisticolas and Cape Turtle Doves all calling in the new day and acting as the alarm call to the start of a new and exciting adventures. A walk in search of Black Rhino was on the cards for the morning and our two guides Richard and Bjorn were well prepared to lead us through the dense bush in search of our elusive quarry. After a quick coffee and snack, we all set off from the lodge in silent single file and were all slightly nervous of the unexpected that lay before us. We stopped occasionally to look at Golden-Orb Spiders, taste the small sweet fruits of the raisin bush or stoop down to read the spoor of countless animals that had passed along the trail in the night. 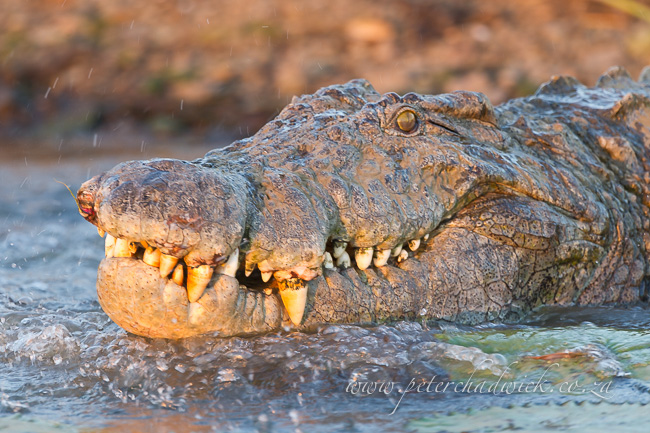 4 of 6. Nile Crocodiles are common in Lake Jozini and include this large 4,5m crocodile

Entering a patch of Tamboti trees we found the fresh spoor of four Black Rhino and noted where they had scratched their rough hides against the coarse bark of the trees and nibbled on the freshly sprouting leaves. We also noted the leopard tracks that had walked over the spoor of the rhino and wondered if the cat was still in the vicinity and was busy watching us. 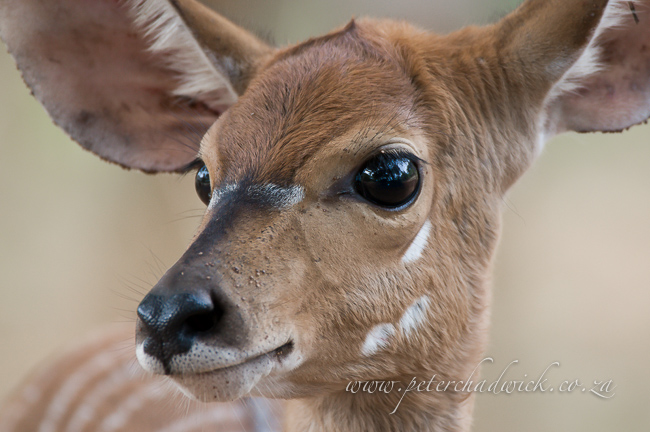 5 of 6. A young Nyala pauses from feeding on the Jozini Lakeshore

A harsh and very loud snort extremely close by had us instantly freeze and we carefully scanned the bush around us eventually finding the tips of the horns and ears of the four Black Rhino just sticking out above the thicket that was only 15 meters away from where we stood. Standing quietly and all looking back over our shoulders to determine which tree we would bolt up into if the rhinos charged, we watched as the group slowly wandered towards us, seemingly oblivious to our presence. A cow and her large calf were the first to leave the thicket and our biggest concern at this stage was that the vigilant Red-Billed Oxpeckers that rode on the rhino’s backs would see us and screech out an alarm call that would send the rhino into a full charge. Fortunately the two rhinos then turned and headed obliquely away from us soon being followed by two bulls, one of which was obviously younger and who kept backing down to the superiority of the more dominant bull. Soon the animals were out of sight in another thicket and we took the chance to back away and continue on our walk. 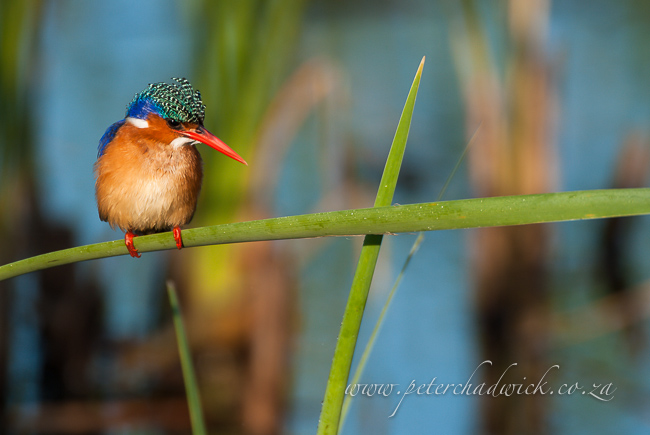 6 of 6. A Malachite Kingfisher perches on a wavy reed stem that overhangs the water

Everyone in the group was now on such a natural high after the incredible encounter with the rhino that a lone Secretary Bird striding across the veld brought little response and a birding party comprising of Long-Billed Crombec, Cardinal Woodpecker, Rattling Cisticola, Blue Waxbill, Chin-Spot Batis and Golden-Breasted Buntings was overlooked totally by most of the party from England who were now chattering excitedly about their once in a lifetime experience in this special piece of African paradise.