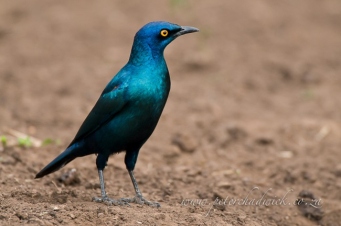 Lush waist-high green- grassed hillsides dotted with acacia trees and shrubs greeted me on my arrival at the Zululand Rhino Reserve and it was hard for me to believe that this had once been a heavily grazed cattle ranching area. The reserve was obviously extremely well managed given the quality of the veld and the healthy glistening herds of Impala, Burchell’s Zebra, Nyala, Blue Wildebeest and Giraffe bore testimony to this. I followed a winding road upwards into the hills and arrived at my destination, the Leopard Mountain Lodge with breathtaking views of what seemed to be the whole of Zululand.

Parking my vehicle, I was met by Helen and Nadine who quickly and efficiently checked me into my chalet that was balanced on top of the ridge with views that extended as far as Mkhuze and the Lebombo Mountains. Standing on the veranda I looked down into the Mzinduzi riverbed that snaked way below the lodge and at the few remaining pools of water troops of Chacma Baboon lazed in the cool shadows of the riparian trees and at another pool a trio of White Rhinos wallowed in the shallows avoiding the summer heat. In the canopies of the riparian trees I was able to watch Southern Yellow-Billed Hornbills, Grey Hornbills, Lilac-Breasted Rollers, White-Fronted Bee-Eaters and Purple-Crested Turacos with the aid of binoculars. 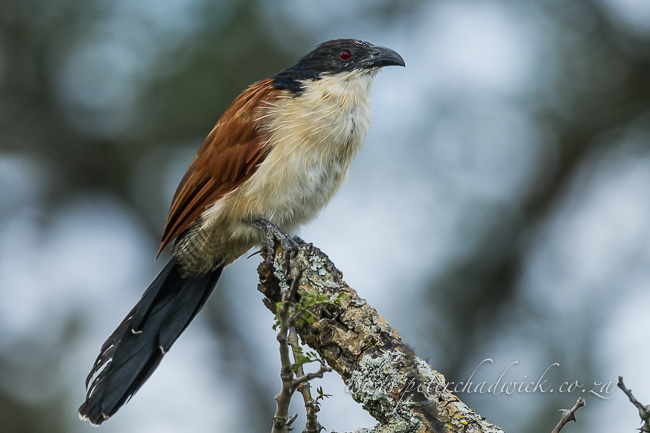 1 of 8. Burchells Coucal calling from the top of a dead tree

Leaving my luggage, I spent the next half hour exploring my immediate surroundings, stopping for a long while at the swimming pool. To one side of the pool, a small waterhole built into the granite dome, had a constant stream of birds that came down and quenched their thirst. First up was a grumpy Crested Barbet that hopped about chasing off the other birds with raised crest and open threatening beak. African Pied Wagtail, Golden-Breasted Buntings, Long-tailed Paradise Whydahs, Dusky Indigobirds, Dark-Capped Bulbuls, Blue Waxbills, Yellow-Eyed Canaries and Southern Grey-Headed Sparrows alternately drank or bathed before flying back into the shade of a nearby shrub. In the meantime, White-Bellied and Scarlet Chested Sunbirds, a Chin-Spot Batis pair, a Pale Flycatcher and a Common Scimitarbill moved between the Combretum trees surrounding the pool and a Brown Snake-Eagle hovered over the hillsides as Red-Winged Starlings flew like a squadron of fighter planes to harass and dive-bomb the eagle until it flew off. 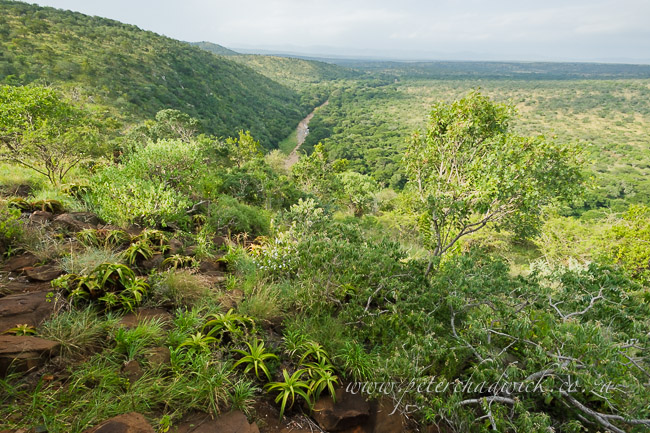 2 of 8. The vast vistas across the Zululand bushveld as viewed from the deck of Leopard Mountain Lodge

Moving out onto the deck of the Lodge, where a refreshing breeze blew away the late summer heat, I watched Fork-Tailed Drongos snatching insects out of the sky and a Crested Francolin, that was alarm calling harshly, ran about as a bold Slender Mongoose chased it around between stunted aloes. Scanning with my binoculars, I picked out a Bateleur swaying from side to side as it scanned the hillsides in effortless flight, while much higher up in the sky, a dozen White-Backed Vultures rode the thermals. 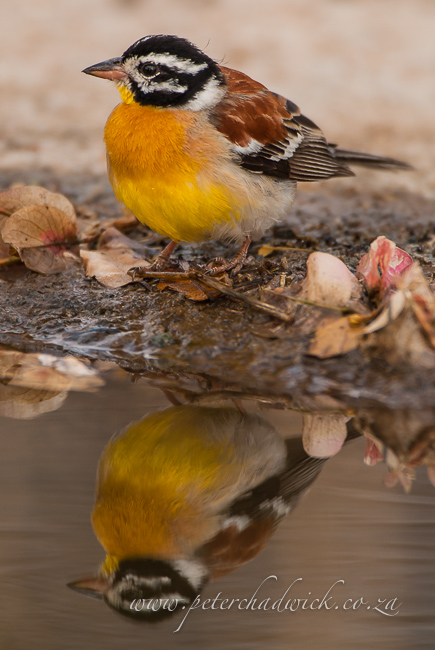 3 of 8. A Golden Breasted Bunting stands reflected in the shallow bird bath.

As our Land Rover departed on its afternoon game-drive, thunder rumbled in the distance and ominous dark clouds were building up rapidly, being blown towards the reserve by a strong gusting wind. This however did not deter us and we were soon watching mixed herds of Kudu, Warthog, Impala, Blue Wildebeest and Nyala. One of the Nyala bulls was walking with a stiff-legged gait and raised his long-haired back mane as it passed other bulls that were feeding close by. This obvious show of dominance was enough to scare off the less-dominant rivals who quickly backed off to a quitter area. Further along the route, we found a Bark Spider that was busy rolling in its web and eating it to save on protein and in preparation to avoid the oncoming storm. While watching the spider, a birding party showed themselves and quickly moved through the upper branches and leaves of the Combretum trees, gleaning insects as they passed by. The party included Southern Black Flycatcher, White-Crested Helmet-Shrikes, Long-Billed Crombec, Rattling Cisticola, Black-Backed Puffback, Cardinal Woodpecker and Southern Black Tits. 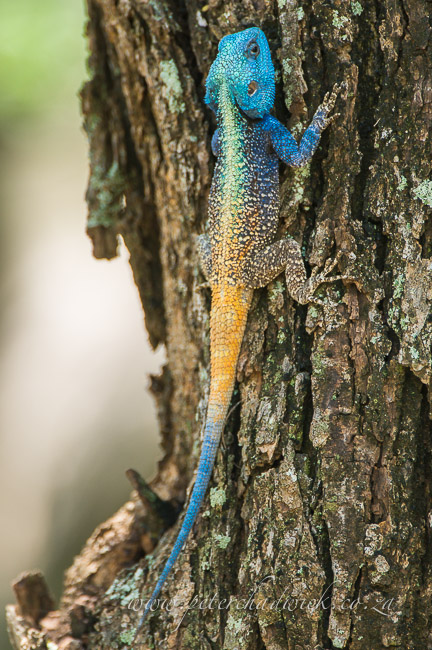 4 of 8. A brightly coloured male Tree Agama in full display prior to the afternoon thunderstorm

Excitement built amongst our group on the vehicle when the spoor of a Black Rhino and calf were found and we followed the tracks until they veered off in to the thick bush and sadly disappeared. By this time, a strong wind was whipping the grasses and treetops and this was soon followed by a total stillness and silence with not even the call of a bird being heard. This was definitely the “quite before the storm” as soon, the dark grey almost black clouds started to empty their heavy loads and massive raindrops and small hailstones started to pelt down from the heavens. This deluge has us quickly retreating to the safety of the lodge. 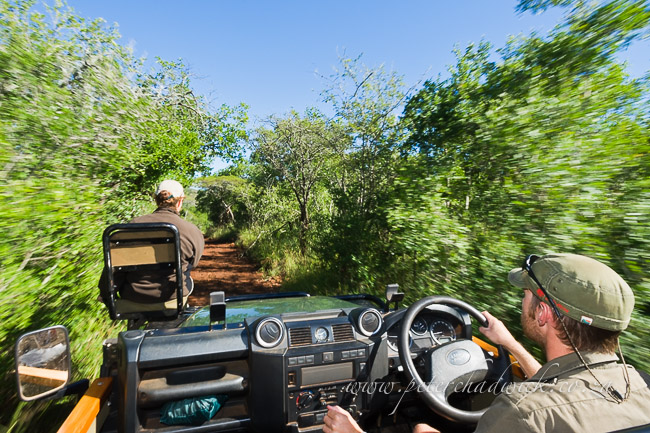 5 of 8. Driving through the thick vegetation of the Zululand Rhino Reserve

Steaming hot coffee and homemade rusks had me up and on the deck as the sky changed from darkness into a pale pinkish-purple and then yellowish-orange as the sun tipped over the horizon. Gorgeous Bush-Shrikes, Black-Headed Oriole, Striped Kingfisher, Red-Capped Robin-Chat and Crested Francolin melodiously heralded in the new day with the suns arrival. Slowly the other guests that were staying at the lodge arrived to join in on the caffeine boost prior to the morning game drive. 6 of 8. Colourful orange flowers of a Wild Dagga plant

Black-Legged Orb Spiders with their attendant Dew-Drop Spiders were the first point of interest on the drive and it was fascinating watching the female orb-spider reel in her nights catch as the sneaky Dew-Drop Spiders parasitized her meal. Next up was a gracious herd of Kudu with attendant Red-Billed Oxpeckers that groomed the Kudus fur with sideways sweeps of their flattened bills. On the birding front, Violet Backed Starling males with their resplendent violet heads and backs brought much “oohs and aahs” from the English guests that were with me on the game-drive vehicle. Black-Bellied Starling, Greater Honeyguide, Green Wood Hoopoe, African Hoopoe, Sabota Lark, African Pipit, Groundscraper Thrush, Bar-Throated Apalis, Black-Backed Puffback and Brubru were also viewed while watching the starlings feed in a fruiting fig tree. 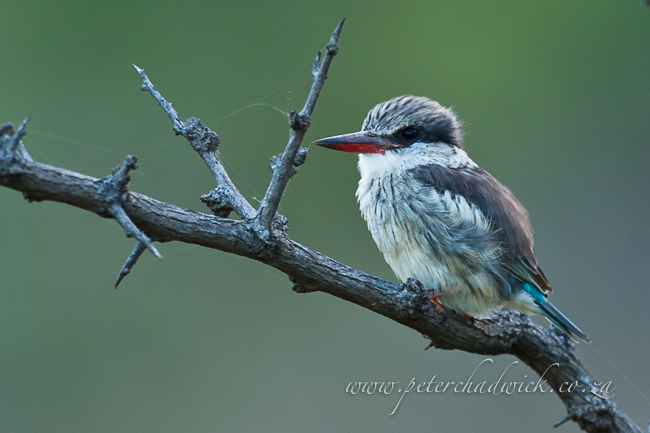 7 of 8. A Striped Kingfisher perched on a dead branch

Leaving the starlings, we soon found the very fresh tracks of a female leopard that was being followed by a Spotted Hyena and which lead us down into the Mzinduzi riverbed where they crossed and disappeared out the other side and up into boulder filled koppies. With the Land Rover churning in the deep sand of the dry riverbed, we drove to a bend where giant Sycamore Fig-Trees arched their branches overhead and here we stopped for a quick brew that was expertly brought to the boil with the aid of a small gas stove. Trumpeter Hornbills, African Green Pigeons and Crowned Hornbills flew to and fro between the trees as Black Saw-Wings and Wire-Tailed Swallows swopped low down through the bends of the river. Up on the cliffs that overlooked us, a pair of Rock Kestrels that were screeching loudly caused me to look up in time to see a Peregrine Falcon swoop along the crest of the cliffs. A Wahlberg’s Eagle pair appeared over the tops of the cliffs just as the falcon disappeared from site adding to the raptor checklist. 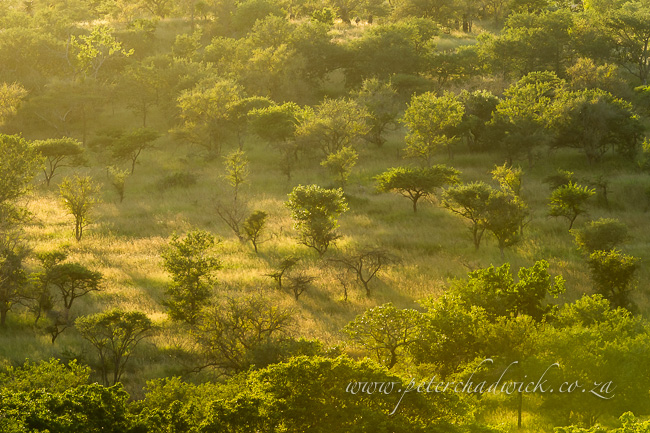 8 of 8. The dawn rays casts a golden glow across the Zululand bushveld

Leaving the riverbed via a steep track and with dense bush on either side, we rounded a corner to find a sub-adult Black Rhino scent marking and rubbing against a bush before browsing on the outer branches of a Tamboti tree where the fresh green shoots were at their juiciest. The rhino allowed us to only watch him for a couple of minutes before it gave a harsh snort and disappeared deep into a drainage line. Without a doubt this magnificent sighting was the highlight of the trip, leaving an indelible imprint in my mind and reminding me why the Zululand bushveld was so special.